Parody Prime Minister
@Parody_PM
I realise the richest 10% will gain 240 times as much money from the National Insurance change as the least well off, but they deserve it because they are more likely to have voted Tory.
22 Sep, 03:27 PM UTC

@KwasiKwarteng
I can confirm that this year’s 1.25% point rise in National Insurance will be reversed on 6th November. Its replacement - the Health and Social Care Levy planned for April 23 - will be cancelled. A tax cut for workers. More cash for businesses to invest, employ and grow. 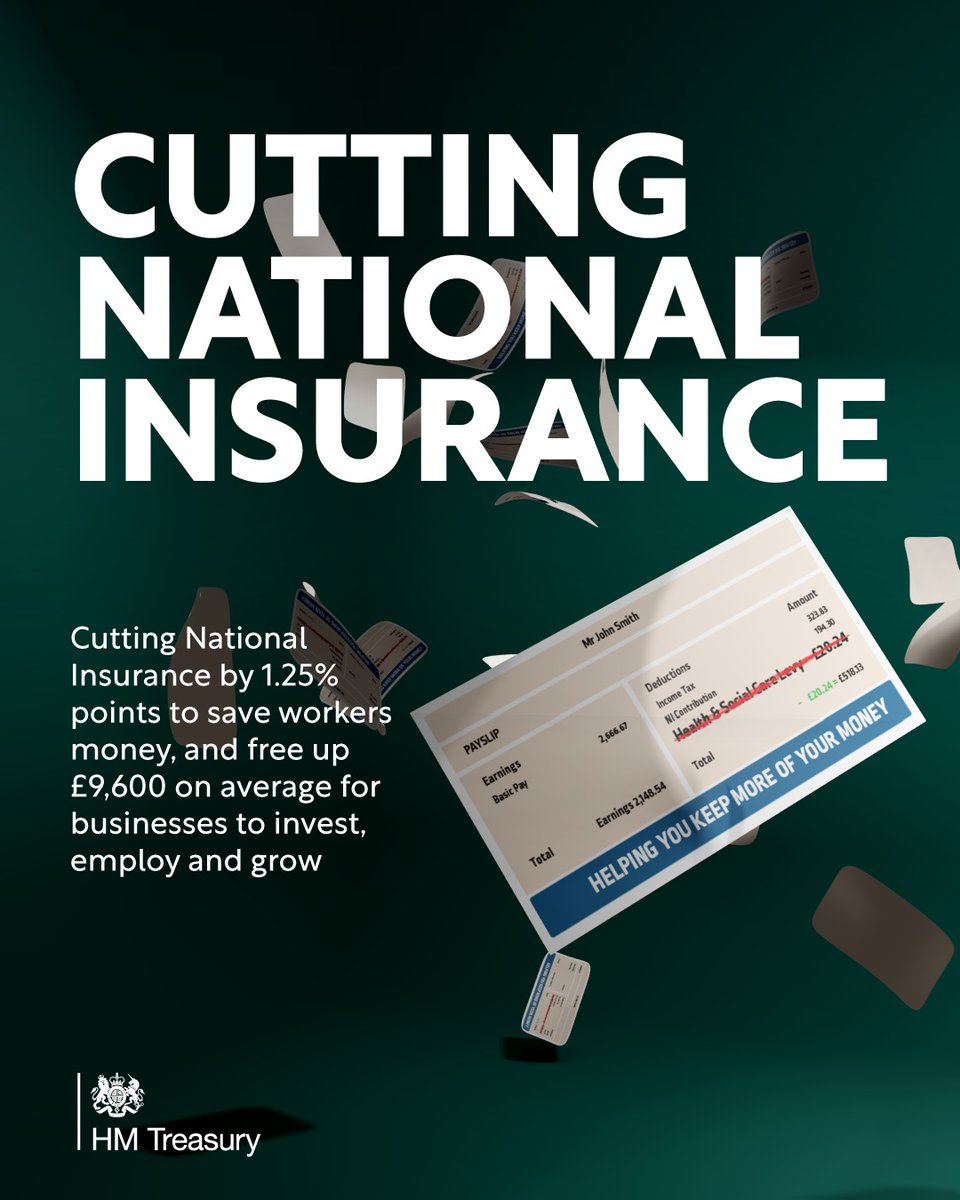 @PaulBrandITV
The @resfoundation says reversing the national insurance rise will see the poorest 10 per cent of households gain an average of £11.41 in 2022-23, while the richest tenth of households stand to gain £682 on average.
22 Sep, 04:25 PM UTC

Ash
@theashrb
So basically, National Insurance went up for absolutely no reason whatsoever other than Boris Johnson’s stupid government trying to plug the holes left from their embezzlement 🥴 I feel like I’ve been robbed…
22 Sep, 01:57 PM UTC

David Henig 🇺🇦
@DavidHenigUK
The wonders of the exact same MPs who voted for a rise in National Insurance last year now being expected to support its reversal.
22 Sep, 01:51 PM UTC

@johnredwood
Good to hear the National Insurance surcharge is to go. We want more better paid jobs so taxing them more is a bad idea. Growth is the best way to generate more tax revenue from greater prosperity.
23 Sep, 05:06 AM UTC

@AlStewartOBE
Another fact missing from a lot of tonight's network TV news bulletins: @KwasiKwarteng has committed to retaining the National Insurance threshold increases to lift the poorest in the UK out of paying the tax altogether.
22 Sep, 10:32 PM UTC

Michael Jacobs
@michaelujacobs
The Chancellor is holding a 'fiscal event' (that is, a Budget) tomorrow. But he has already announced the cut in National Insurance contributions today. Confused as to what Kwarteng and Truss are doing? So are most economists. Could this end in disaster? It could start in it.🧵/1 https://t.co/vEyLIATwWJ
22 Sep, 05:41 PM UTC

Prem Sikka
@premnsikka
Tory Levelling-Up Minister says: "Reversing the National Insurance rise means someone earning £20,000 will get an additional £1.79 a week while a person on £100,000 will benefit from an additional £21 a week. This is fair." They don't feel any shame is saying this.
23 Sep, 08:30 AM UTC

@KEdge23
National Insurance tax rise reversed immediately. Planned corporation tax rise for next year cancelled. Top rate of tax scrapped. Income tax cut coming next year. I am so glad to see the tax cutting Conservatives are back in business. Huge focus on the economy. #MiniBudget
23 Sep, 09:05 AM UTC

@hmtreasury
From 6th November the government is cutting National Insurance by 1.25 percentage points and cancelling the Health & Social Care Levy. This will: ✅ Reduce the tax on jobs ✅ Let families keep more of what they earn ✅ Support economic growth 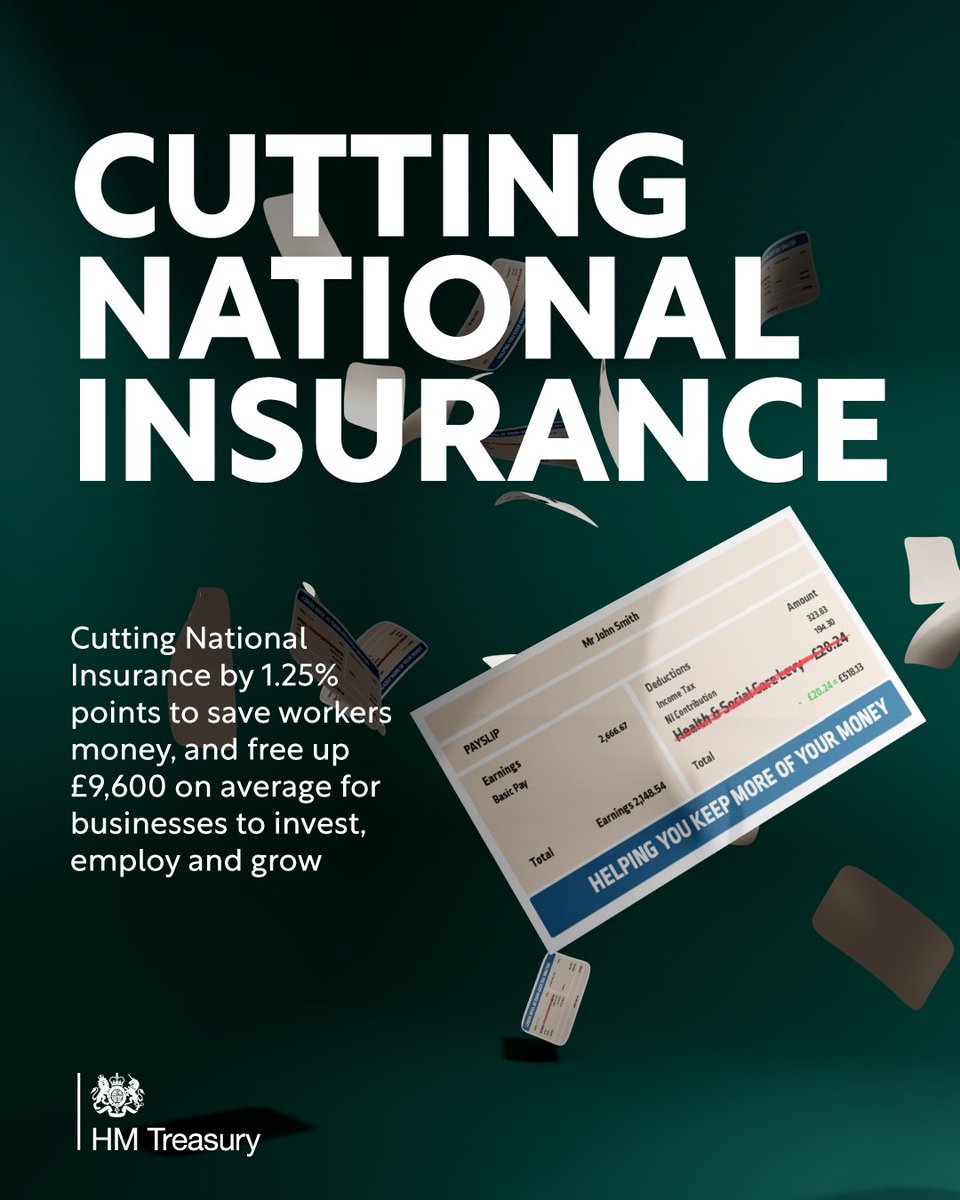 @MartinSLewis
NEW. What will you take home from November when National Insurance is cut by 1.25% points. Our income tax calc has the new figures... https://t.co/34c8bFKbbj
23 Sep, 10:13 AM UTC

𝑴𝒂𝒓𝒕𝒊
@marti81_16
Not often I comment on politics but had to today. When Boris made changes to National Insurance, Labour were horrified and millions were gonna die. Now Liz Truss has reversed it, Labour say it’s just a drop in the ocean 🤷‍♂️🤷‍♂️
23 Sep, 06:35 AM UTC

@hmtreasury
Chancellor @KwasiKwarteng has announced that this year’s 1.25% point rise in National Insurance and its replacement, the Health and Social Care Levy planned for April 2023, will be cancelled. A tax cut for workers, while freeing up cash for businesses to invest, employ and grow.
22 Sep, 01:46 PM UTC

@resfoundation
The reversal of the National Insurance rise, announced by the Chancellor yesterday, will primarily benefit those who need help the least... 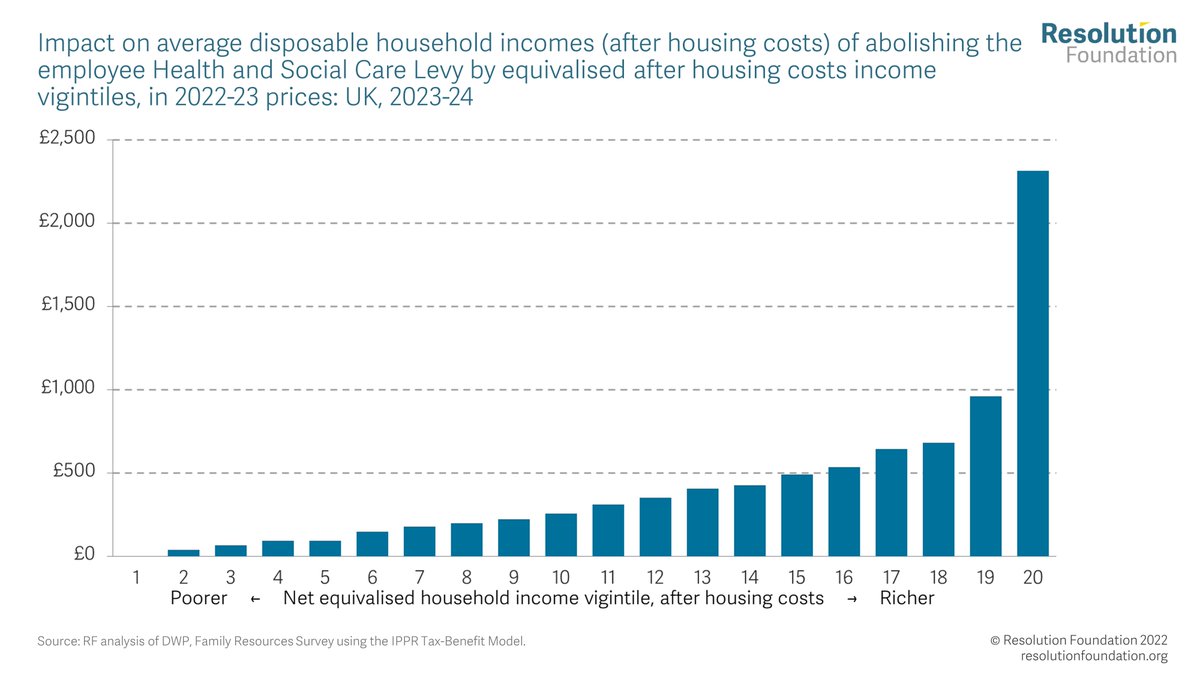 Robert Kimbell
@Rob_Kimbell
Chancellor Kwasi Kwarteng confirms that the Government will reverse the 1.5 percentage point rise in National Insurance rates introduced by his predecessor, Rishi Sunak. “We will review the tax system to make it simpler and fairer,” Kwarteng said, reports The Telegraph.
23 Sep, 09:01 AM UTC 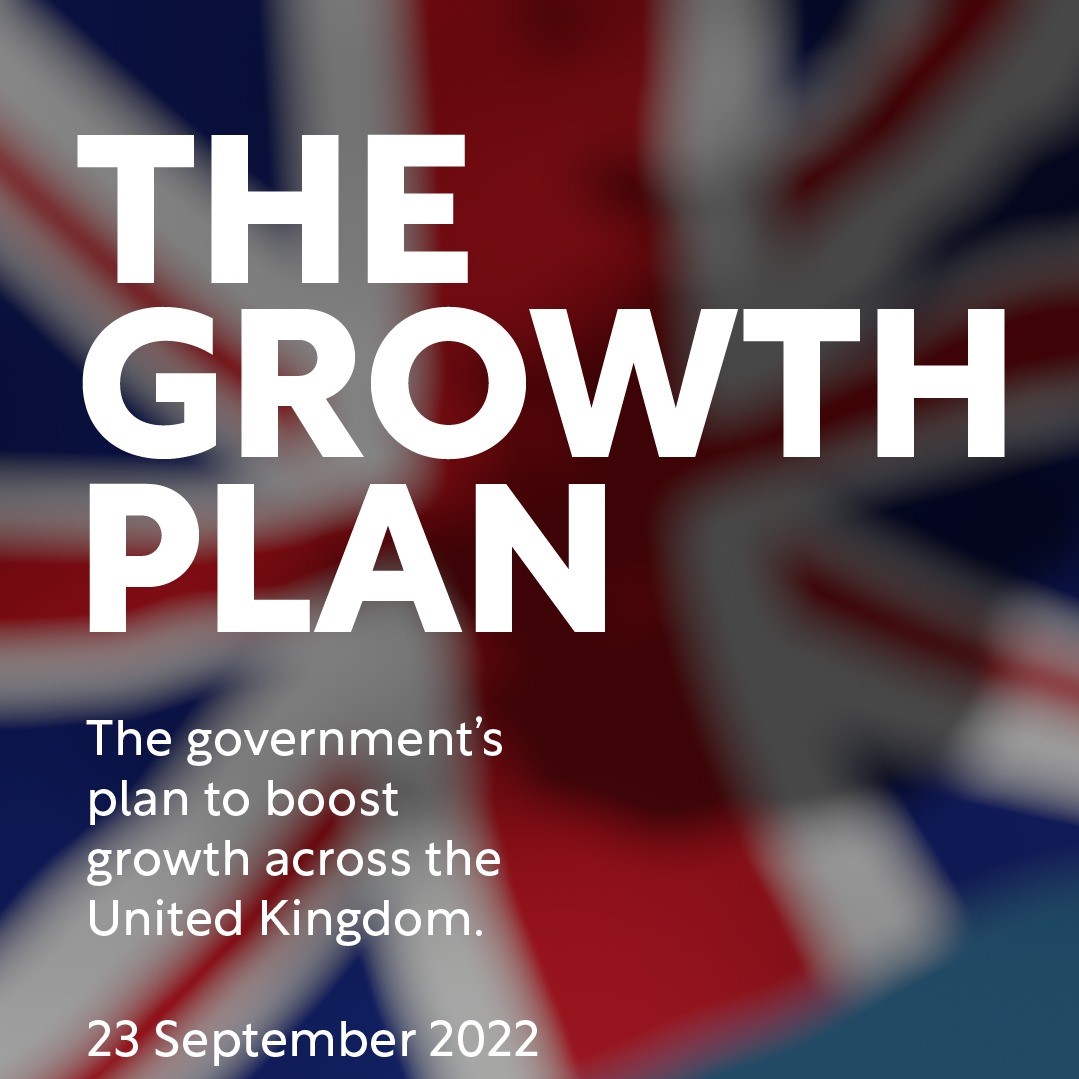 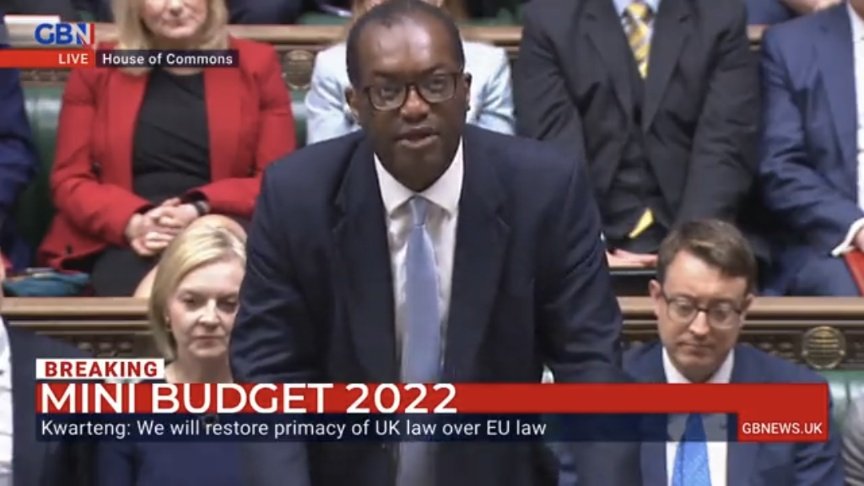 Paul Lewis
@paullewismoney
And if a business hires a new employee in the tax site, then on the first £50,000 they earn… …the employer will pay no National Insurance whatsoever.
23 Sep, 08:50 AM UTC

Lord Myrddin Wizard
@MaryDenise22
Britons brace for Kwarteng to slash VAT in 'game changing' move https://t.co/WgIT2yDKEU 😢BUDGET is on now 9.30 wont be anything for 1950 ladies so don't get hopes up or else you will be disappointed😬
23 Sep, 08:16 AM UTC

Sam
@Samwillsort
@RachelReevesMP @Keir_Starmer Just to clarify then: labour is against cuts in the basic rate of income tax, lowering national insurance, and raising the starting point of stamp duty? Got it. Thanks. Labour is against the working man and woman.
23 Sep, 10:05 AM UTC 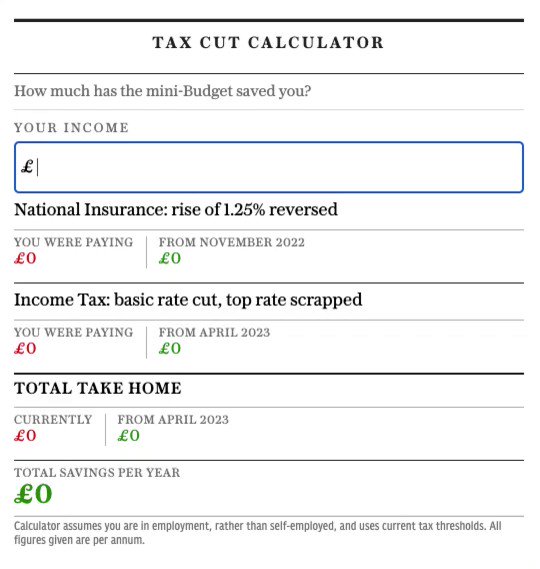 Kristian Hardiman
@KristianHardim1
@ihelpcp1 @The_TUC National insurance caps out after a certain level. There is only a maximum u have to contribute. So someone on 50k gets a payrise will still be paying extra in national insurance. Whilst someone on say half a million will pay the same tax (40%) on that payrise, but not the N.I
23 Sep, 10:32 AM UTC