@vermontgmg
The FBI raiding Mar-a-Lago on August 8th, the anniversary of Richard Nixon announcing he’s resigning, has a certain poetry to it.
08 Aug, 11:10 PM UTC

@tedcruz
1/x The FBI raiding Donald Trump is unprecedented. It is corrupt & an abuse of power. What Nixon tried to do, Biden has now implemented: The Biden Admin has fully weaponized DOJ & FBI to target their political enemies. And with 87K new IRS agents, they’re coming for YOU too.
09 Aug, 03:13 AM UTC

@BeschlossDC
Presidential Records Act of 1978 was passed in response to Nixon's effort to take his Presidential tapes and papers with him to California, where they were in danger of being destroyed.
09 Aug, 12:24 AM UTC

@EliLake
If DoJ has the goods on Trump, then charge him. But raiding his home for a violation of the presidential records act on the anniversary of Nixon’s resignation smells like partisan bullshit and an abuse of power.
09 Aug, 01:01 AM UTC

Republicans against Trumpism
@RpsAgainstTrump
Here is a picture of the most corrupt President in American history and Richard Nixon. https://t.co/frMk0278nP
08 Aug, 11:23 PM UTC

Brett Meiselas
@BMeiselas
The Republican Party could have dumped Trump like they did Nixon. Instead, they chose to be his accomplices. This is not about right or left. Democrat or Republican. This is about the rule of law. And the GOP has turned into a crime syndicate.
09 Aug, 01:48 AM UTC

@kimwehle
all accountable, impliedly including Trump (5) executive privilege belongs to Biden now, and SCOTUS told Nixon that criminal system overrides it anyway; (6) the country needs to prepare for indictments and remember what we were founded on: Truth. Equality. No More Kings. /end
08 Aug, 11:26 PM UTC

Gabe Sanchez 
@iamgabesanchez
August 8, 1974: Richard Nixon announces he is resigning as President. August 8, 2022: Donald Trump announces his home is being raided by the FBI. Damn, Dark Garland has a sick sense of humor.
09 Aug, 02:50 AM UTC

Spiro Agnew’s Ghost
@SpiroAgnewGhost
At this hour, 48 years ago tonight, August 8, 1974, President Nixon announced his resignation in a prime time address, 3 days after the “smoking gun” tape release fully imploded his Presidency. He had continually lied to the public & his own friends in Congress for over 2 years. https://t.co/2ObTTjq3DC
09 Aug, 01:01 AM UTC

Alien Steward
@skier5150
@vermontgmg Difference from Watergate was that WG was a trifle compared to this. Nixon was a ultimately loyal to our country and Trump is a traitor.
09 Aug, 12:04 AM UTC

@brianstelter
All of this is happening "on the 48th anniversary of Richard Nixon announcing his resignation," @SRuhle said on MSNBC. https://t.co/2NEsvX9wwB
09 Aug, 04:56 AM UTC

CareNow 🌻🇺🇦
@RannowCarol
@marceelias On the Anniversary of Nixon's RESIGNATION!!! 😁
09 Aug, 12:22 AM UTC 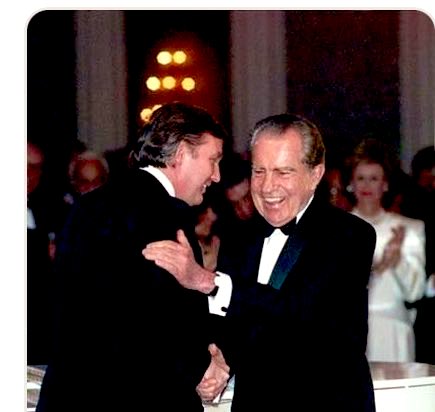 Presidential Trivia
@triviapotus
#OTD in 1974, Richard Nixon resigned and Gerald Ford took the oath of office. “My fellow Americans, our long national nightmare is over.” https://t.co/FEbJIZUC6P https://t.co/jidQIf5wG7
09 Aug, 10:20 AM UTC

@MeidasTouch
@GregAbbott_TX The one thing that is Nixonioan is the Republican corruption and criminality. Except back then, at least some Republicans had a spine. They didn't decide to go all-in on Nixon's crimes. What you're doing is equivalent to demanding to punish the FBI for investigating Watergate.
09 Aug, 12:19 PM UTC

Sheila
@sheiladesoto
@SenTomCotton As a member of Congress, you should have knowledge that Congress passed a law in response to Nixon's bad deeds that required government officials to preserve records. Former presidents CANNOT destroy or steal classified records. Do you approve of breaking the law?
09 Aug, 09:54 AM UTC

Grandma Grit 🌎
@grandmagrit
It was 48 years ago yesterday that Nixon announced his resignation. We were watching on TV and could hear cheers going up from the neighbors. Trump is worse than Nixon. The world danced in the streets when he was defeated. It will celebrate when he is finally convicted too.
09 Aug, 01:37 PM UTC

BethinCanberra
@ElbK19
Q: What is the difference between the #FBI raid and #Watergate asks Mr Trump? Is it that Nixon didn’t run a coup d’etat during his presidency. #auspol
09 Aug, 08:39 AM UTC

Richard M. Nixon
@dick_nixon
I spoke quickly and I think most of you get it, but there have been a few incidents of misunderstanding. The standard for a warrant is the lowest in law -- probable cause. But probable cause looks different for John Smith vs. a former President of the United States.
09 Aug, 01:45 PM UTC

StreetJust
@Streetjust
The FBI has NEVER raided a former President before? Not even Nixon after he resigned? What classified documents could Trump have had that would have prompted the FBI to take such unprecedented action?
09 Aug, 01:28 PM UTC

Brian Jacobs
@JoJoMorales15
@ProjectLincoln @SykesCharlie When you consider the fact that it was congressional republicans who have Nixon the ultimatum to resign or be impeached and removed, it becomes clear@just how far the GOP has fallen.
09 Aug, 01:21 PM UTC

Samuel Colombo
@samuelcolombo01
@ArgentMottyl @Sensei415 @harrylitman @marceelias Good question. Ford pardoned Nixon. Not sure if that excluded him from holding office. GOP would have to win 2024. Trump is getting older and might not do well in prison.
09 Aug, 01:45 PM UTC