@mmpadellan
trump's terrorists were calling Officer Dunn a n****r during the January 6th riot, but yeah tell us how there's no racism in America.
27 Jul, 03:12 PM UTC

@funder
Officer Dunn gives a message to insurrectionists while looking straight at the camera: “You all tried to disrupt democracy that day, and you failed.”
27 Jul, 03:08 PM UTC

@mkraju
Officer Dunn, testifying about the racial slurs from the insurrectionists, says he heard on Jan. 6: "You hear that guys, this n**** voted for Joe Biden. Boooo, fucking n****!'" they were screaming Dunn added: "No one had ever ever called me a n***** while wearing a uniform."
27 Jul, 02:57 PM UTC

@RepJeffries
Is anyone surprised that the Trump-inspired terrorists repeatedly called black police officers the N-word? Thank you Officer Dunn for sharing your story with the world. These are sick people.
27 Jul, 03:23 PM UTC

@atrupar
Officer Dunn: "I told them to just leave the Capitol, and in response they yelled, 'no man, this is our house. President Trump invited us here. We're here to stop the steal.'" He goes on to detail how crowd yelled racial slurs at him. 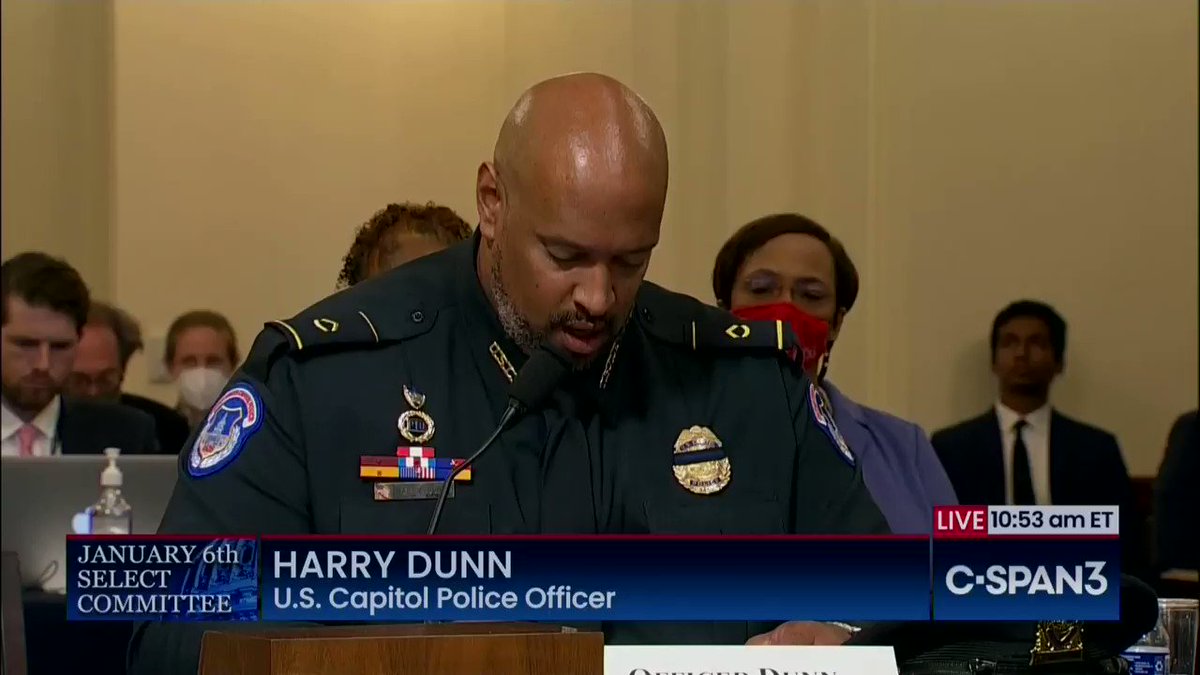 Julie Kelly 🇺🇸
@julie_kelly2
USCP Officer Dunn opens up with a lie. Wants a moment of silence for Officer Sicknick “who died in the line of duty.” If it was as bad as they say, why do they keep lying? No mention yet of Ashli Babbitt.
27 Jul, 02:48 PM UTC

Amee Vanderpool
@girlsreallyrule
After hearing what officer Dunn was called on Jan. 6th, do you understand now why Tucker Carlson chose to focus only on verbally attacking Officer Harry Dunn and not the three other white officers? Do you get it?
27 Jul, 02:59 PM UTC

@atrupar
Officer Dunn on racial abuse he received on January 6: "It was just so overwhelming and so disheartening and disappointing that we live in a country with people like that" 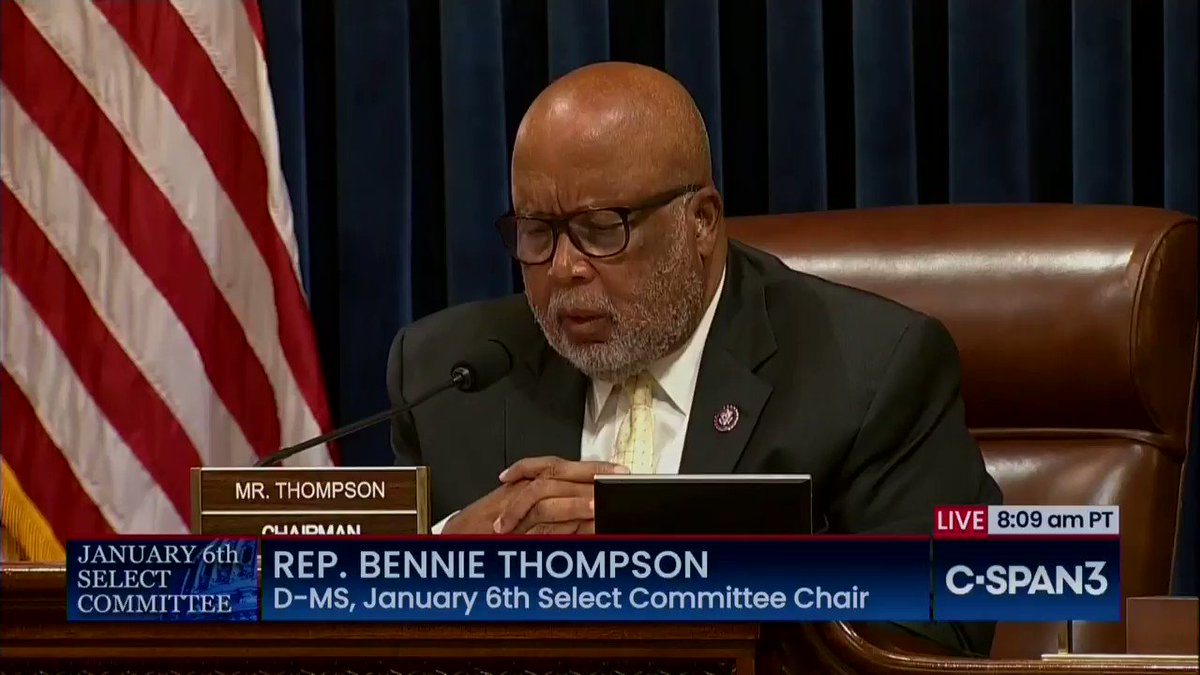 @JoyAnnReid
Officer Dunn says he had never been called a ni—er while in uniform. He describes fellow Black officers saying they had never been called ni—ers to their face before 1/6/21. One was told by the insurrectionists “put your gun down and we’ll show you what kind of ni—er you are.” 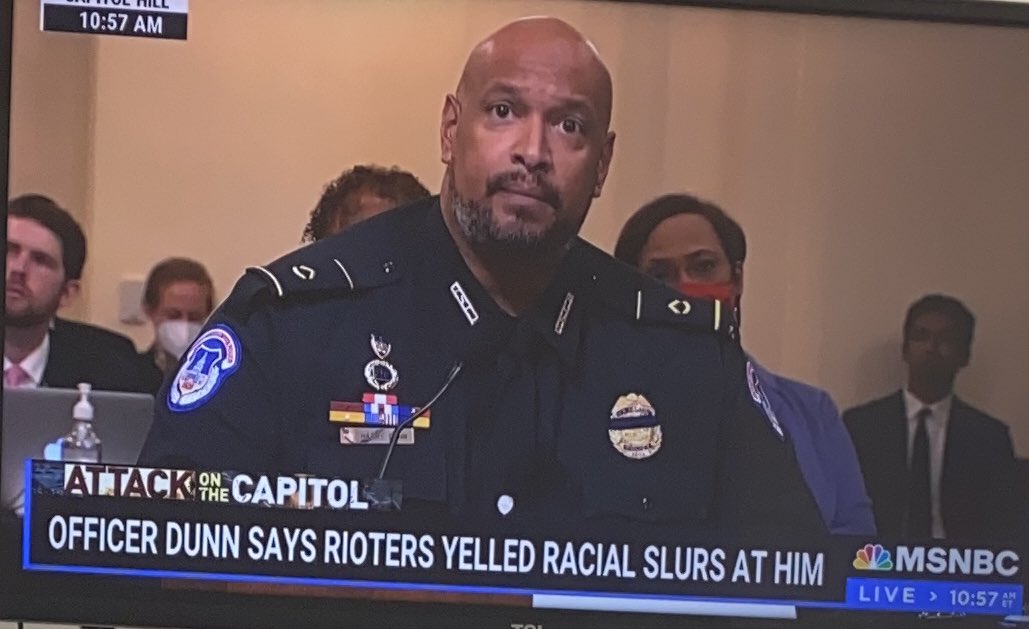 @MollyJongFast
Officer Dunn is describing a trump supporter with a confederate flag. 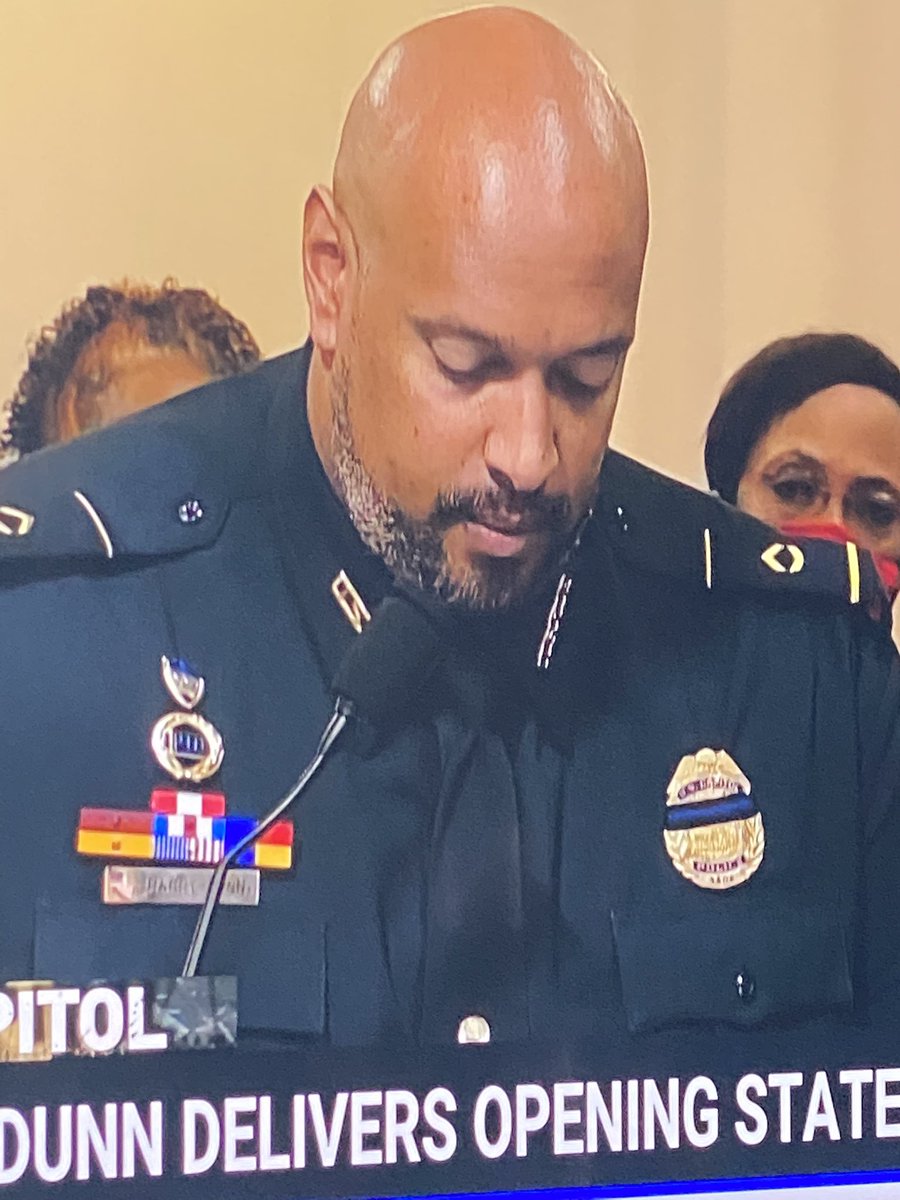 @NBCNews
Officer Dunn testifies that Capitol rioters yelled racial slurs at him on Jan. 6: "No one had ever, ever called me a n----- while wearing the uniform of a Capitol Police Officer." https://t.co/pXaX32npSI 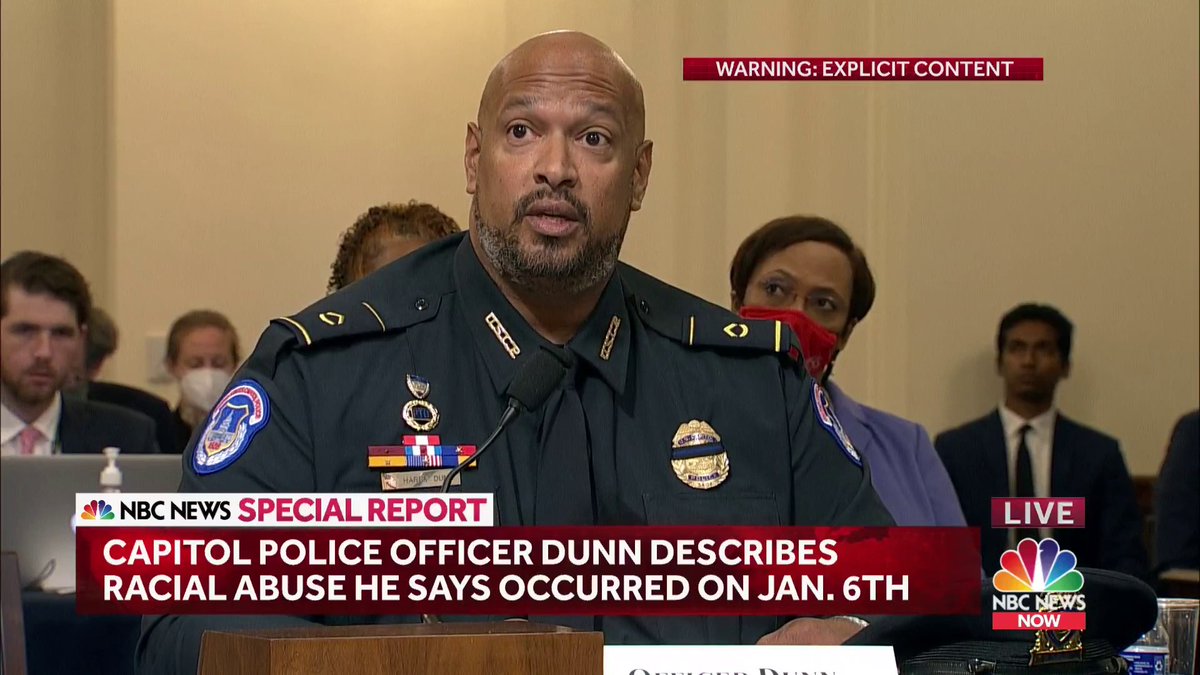 @AccountableGOP
Officer Dunn: "We can never again allow democracy to be put in peril as it was on Jan. 6." "Democracy won that night, and still continues to exist today. Democracy is bigger than any one person or party. Y'all tried to disrupt democracy that day, and y'all failed." 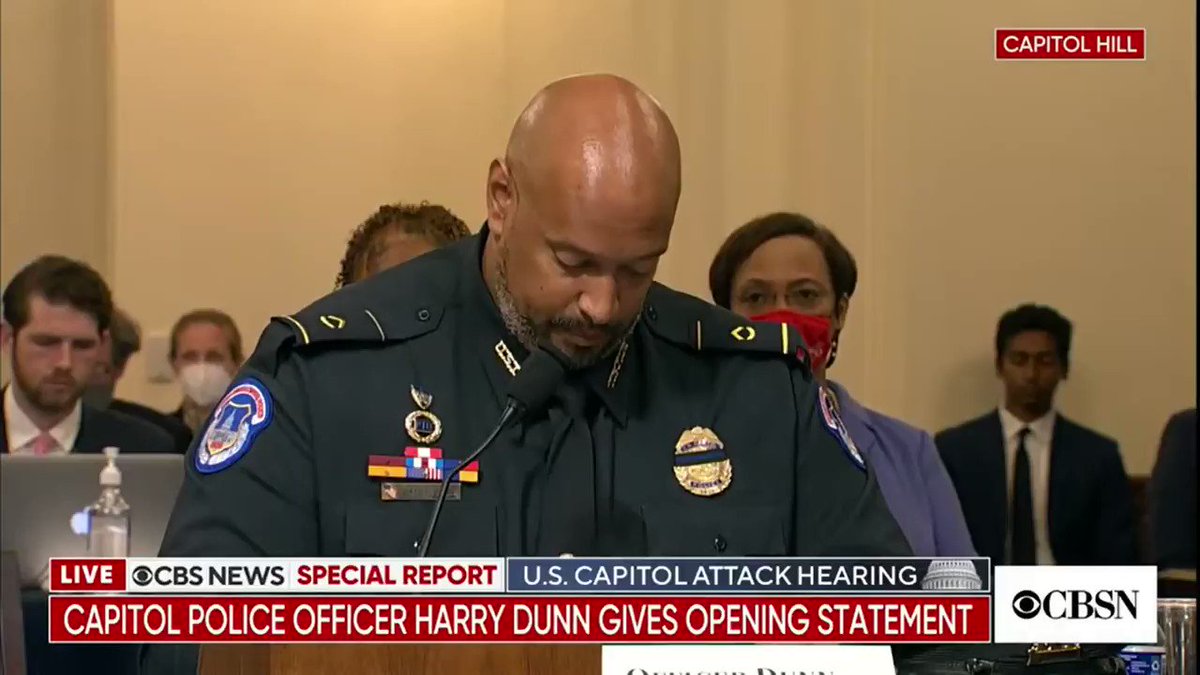 @AccountableGOP
Officer Dunn recounts the words of the rioters: "I told them to just leave the Capitol, and in response they yelled 'no man, this is our house, President Trump invited us here. We're here to stop the steal. Joe Biden is not the president, nobody voted for Biden.'" 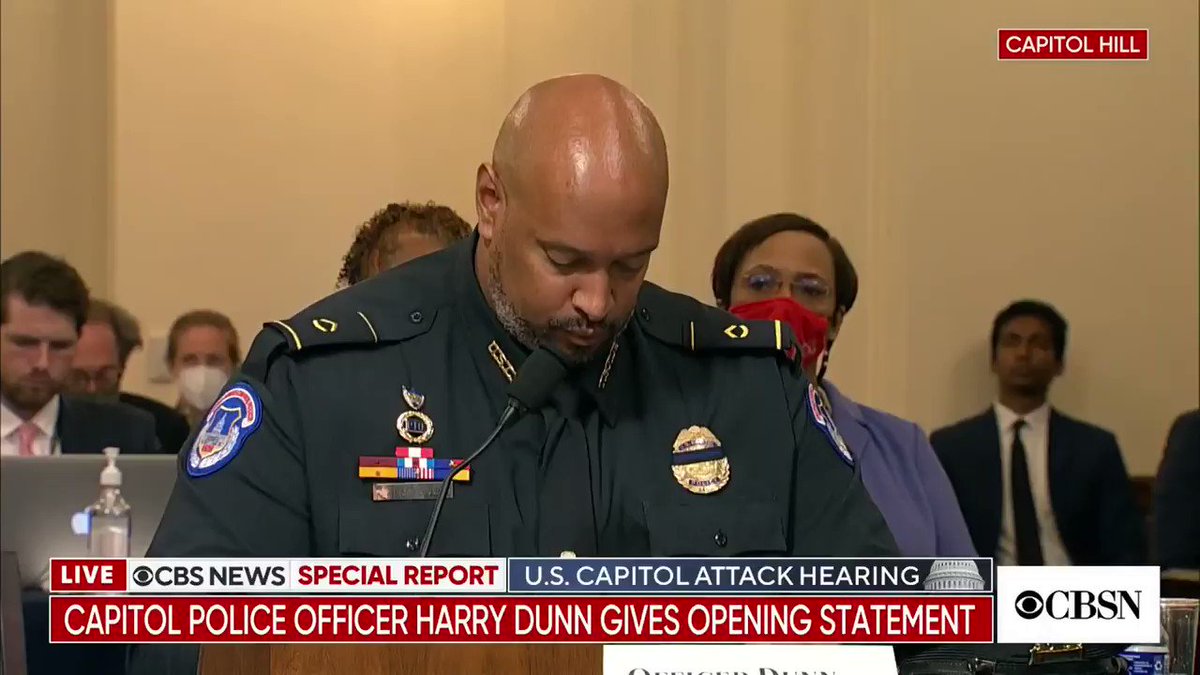 @MSNBC
Officer Dunn testifies that Capitol rioters yelled racial slurs at him on Jan. 6: "No one had ever, ever called me a n----- while wearing the uniform of a Capitol Police Officer."

Wu-Tang Is For The Children
@WUTangKids
OMG….take a minute and listen to this clip of Officer Dunn’s opening statement….the people that stormed The Capitol weren’t just MAGA terrorists they were monsters https://t.co/PHRyFiLjdF
27 Jul, 03:04 PM UTC

@MSNBC
Rep. Kinzinger: "Does this feel like old history and time to move to move on?" Officer Hodges: "There can be no moving on without accountability, there can be no healing until we make sure this can't happen again." Officer Dunn: "How do you without correcting what happened?" 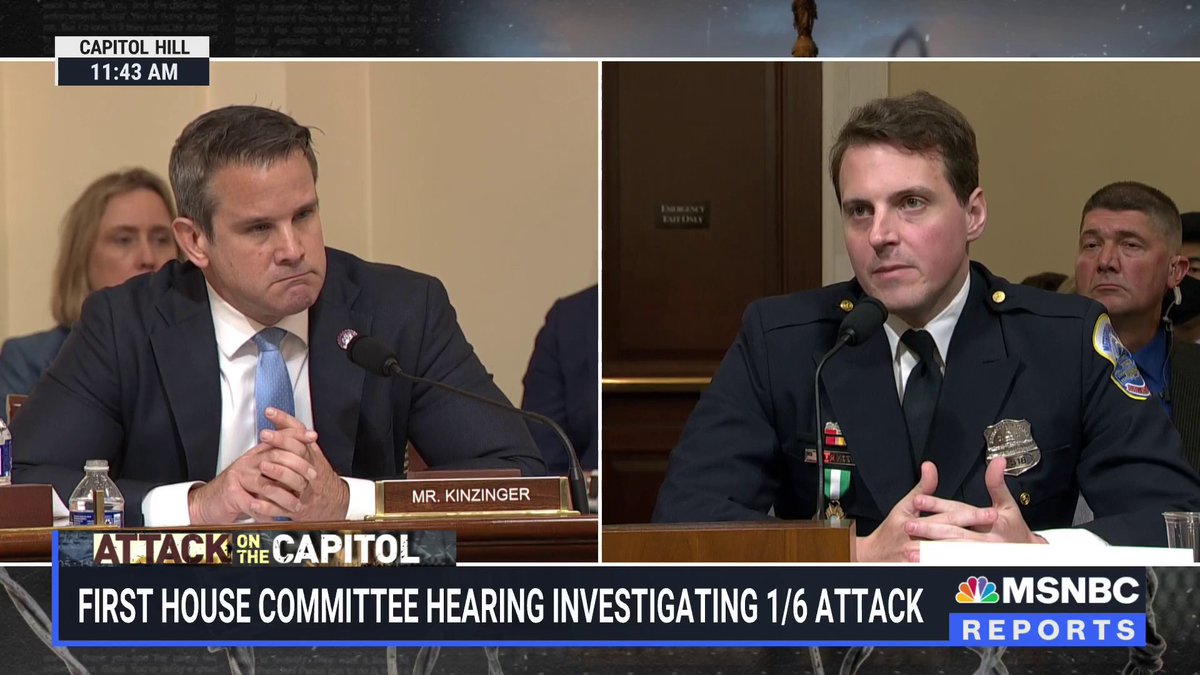 @KenDilanianNBC
Officer Dunn: "Our chain of command had not prepared us for these levels of violence...We were not prepared for what we faced that day." This inquiry needs to determine why FBI and/or DHS didn't warn local police about a looming domestic terrorism attack.
27 Jul, 03:22 PM UTC

@cspan
Officer Dunn on January 6th rioters saying nobody voted for Joe Biden: "I responded, 'Well I voted for Joe Biden. Does my vote not count? Am I nobody?' That prompted a torrent of racial epithets." Watch full video here: https://t.co/G7q6W7l6Uq 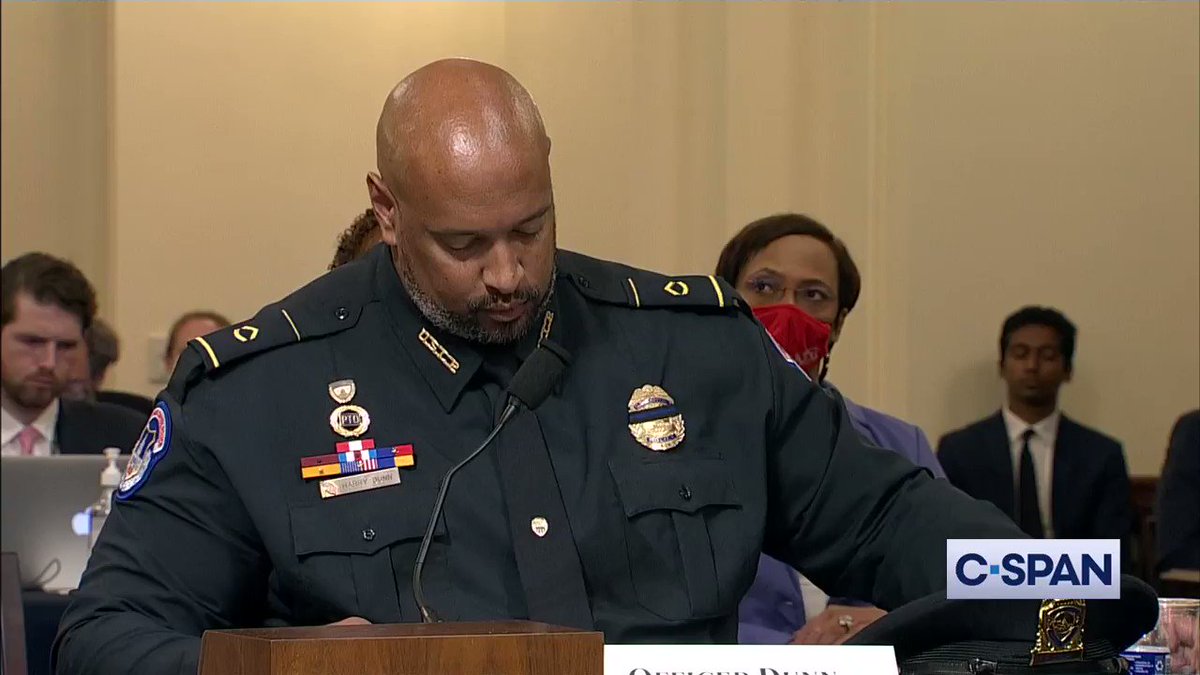 @joekennedy
I know Officer Dunn. He is a good and decent man who shows up every day to keep our Capitol safe. What he was subjected to on January 6 is unconscionable. https://t.co/XTxwMstuvh
27 Jul, 03:48 PM UTC

Laura Rozen
@lrozen
Officer Dunn says he protected kevin mccarthy on that day, and will continue to protect him. and on that day, McCarthy denounced the attack. Since then, he has retreated from denouncing it.
27 Jul, 03:00 PM UTC

@elliotcwilliams
Amazing that the *next* line Officer Dunn said -- the thing about another Black officer hearing "put down your gun and show us what kind of n*gger you are" was even worse https://t.co/vjn3T0Yvbe
27 Jul, 03:20 PM UTC