@pattonoswalt
Oh WOW the wording of the Matt Gaetz pardon request. “Any and all things I’ve done from the beginning of time to now.” Whaaaaaat?!?
23 Jun, 10:51 PM UTC

@OccupyDemocrats
BREAKING: Harvard’s constitutional law expert demands that Marjorie Taylor Greene be disqualified from running for November’s election now that the January 6 Committee just revealed that she begged Trump for a pardon for “engaging in insurrection.” RT IF SHE MUST BE DISQUALIFIED!
23 Jun, 11:32 PM UTC

@JoyceWhiteVance
Not surprised Matt Gaetz would want a pardon for all things from the beginning of time
23 Jun, 09:15 PM UTC

@NoLieWithBTC
Matt Gaetz asked for a blanket pardon “from the beginning of time, up until today, for any and all things.” You cannot make this stuff up.
24 Jun, 01:15 AM UTC

@NoLieWithBTC
“The only reason I know to ask for a pardon is because you think you’ve committed a crime.” —Adam Kinzinger 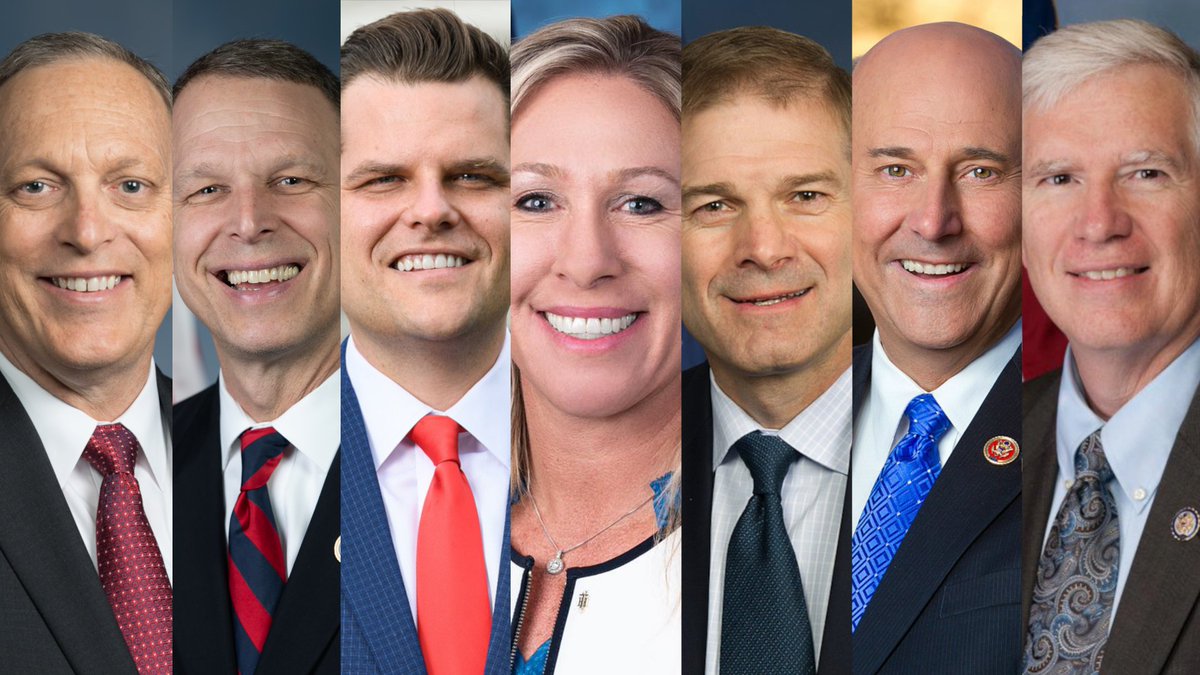 @ChrisJansing
"The pardon he was requesting was as broad as you could describe, from the beginning of time, up until today, for any and all things" Eric Herschmann on Rep Matt Gaetz requesting a pre-emptive pardon
23 Jun, 09:18 PM UTC

@joncoopertweets
Serious question: Who thinks Matt Gaetz wanted a pardon for having sex with underage girls?
24 Jun, 03:52 AM UTC

@JohnBonifaz
REMINDER: Rep. Greene, who we now know sought a pardon from the Trump WH, is still trying to defend herself in our 14.3 challenge to her eligibility to appear on the ballot. A Fulton County Superior Court judge will hear our appeal on July 18. @FSFP https://t.co/nXnfbP0hF9
23 Jun, 09:57 PM UTC

@froomkin
This pardon talk is a good reminder that in the days right after 1/6, everybody realized how illegal this whole thing was. Then the shocking -- and shockingly successful -- GOP PR pushback began,
23 Jun, 09:17 PM UTC

@tribelaw
Why didn’t Trump pardon ‘em all on his way out the door? Easy: Pardons end the danger of criminal self-incrimination and thus prevent their recipients from taking the Fifth w/out being held in contempt.Dangling pardons protects a corrupt POTUS; granting pardons puts him at risk.
24 Jun, 06:59 AM UTC

@ChristopherHahn
Accepting a pardon is an admission of guilt. Members of Congress who requested Pardons should be removed.
23 Jun, 10:39 PM UTC

Jo 🌻
@JoJoFromJerz
Every single traitor who sought a blanket pardon for their role in January 6th needs to be removed from Congress. Today.
23 Jun, 11:50 PM UTC

@MollyJongFast
Yeah why didn’t Trump pardon all those congresspeople?
24 Jun, 01:10 AM UTC

@TristanSnell
Marjorie Taylor Greene was sworn into office on January 3, 2021. Gee, I wonder what she possibly could have done that she felt the need to get herself a pardon only a few days later? 🤔
24 Jun, 02:17 AM UTC

@CIAspygirl
I beg your pardon. Oops, I mean you begged for a pardon. 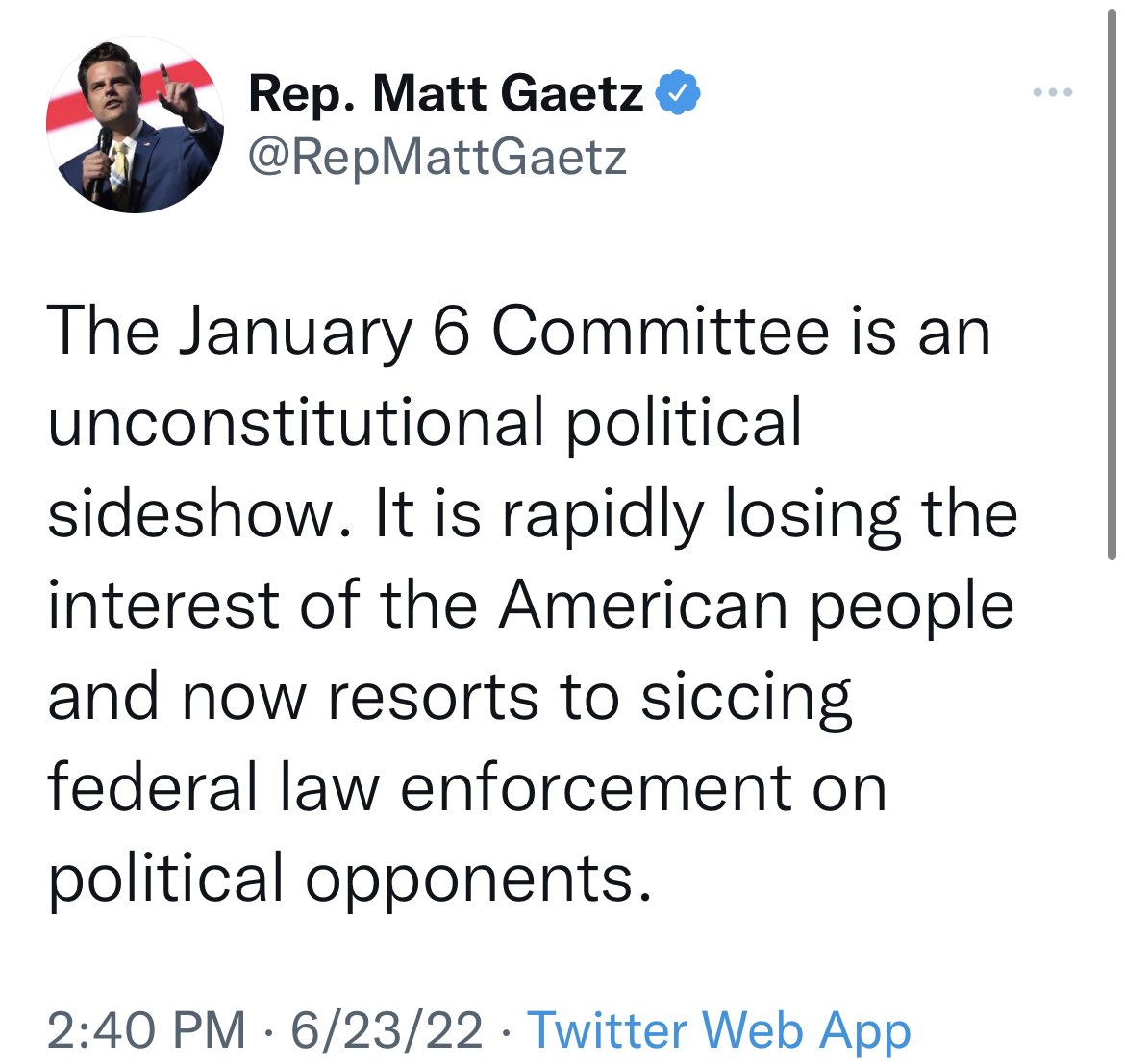 @glennkirschner2
J6 hearing: We just saw video of some of the members of Congress who did Donald Trump’s corrupt bidding to overturn the election results. Was it a preview of the members of “the pardon list”? Gohmert Biggs Gosar Gaetz Jordan Brooks
23 Jun, 07:42 PM UTC

Christopher 🇺🇸 Is Pro-Choice
@cwebbonline
I feel like we should have a new appreciation for a woman who was grilled by Congress for 11 hours under oath and never asked the President for a pardon because she had nothing to hide. @HillaryClinton https://t.co/uONrWzmo6l
24 Jun, 12:41 AM UTC

@harrylitman
You can bet there is serious freaking out w/in the ranks of Republican Congressmen, who have been conspicuously silent these last few weeks, in particular whoever among them broached the idea of getting a pardon.
23 Jun, 08:22 PM UTC

Andrea Junker
@Strandjunker
In a sane world, every single member of Congress who begged Donald Trump for a pardon would wake up today unemployed — and wanted by arrest warrant.
24 Jun, 11:30 AM UTC

@OlgaNYC1211
@RepScottPerry Well Trump never gave you the pardon because he is a con but I’m sure you will be getting a grand jury subpoena and hopefully an FBI visit. There has to be accountability for sedition
24 Jun, 12:00 AM UTC

KD 📚🌎🌊🇺🇸🌻
@kdnerak33
BREAKING: Matt Gaetz and Mike Lindell are reportedly teaming up on a new product: The Blanket Pardon
24 Jun, 11:30 AM UTC

@kylegriffin1
Sen. Sheldon Whitehouse: "As a matter of law, I believe, to get a pardon, you are, effectively, legally conceding guilt in the matter and that is part of the process of the pardon." @MSNBC
24 Jun, 01:30 PM UTC

@BeschlossDC
Because Ford gave Nixon a pardon with no serious strings attached, Nixon spent rest of his life claiming he had been unfairly treated. This encouraged Trump (who “admired” and pursued friendship with Nixon) to presume he could trample the Constitution without grave consequences.
23 Jun, 11:21 PM UTC

Debbie
@DebbieSVA
@RepScottPerry Testify under oath 🙄 U.S. Supreme Court ruling in Burdick v. United States that stated "a pardon carries an imputation of guilt; acceptance a confession of it."
24 Jun, 12:11 AM UTC

Ron Filipkowski 🇺🇦
@RonFilipkowski
Some of the pardon requesters last night denied they ever asked. Others admitted it, but said they needed one to protect themselves against vicious Democrats. These morons can’t even get their stories straight on that.
24 Jun, 10:54 AM UTC