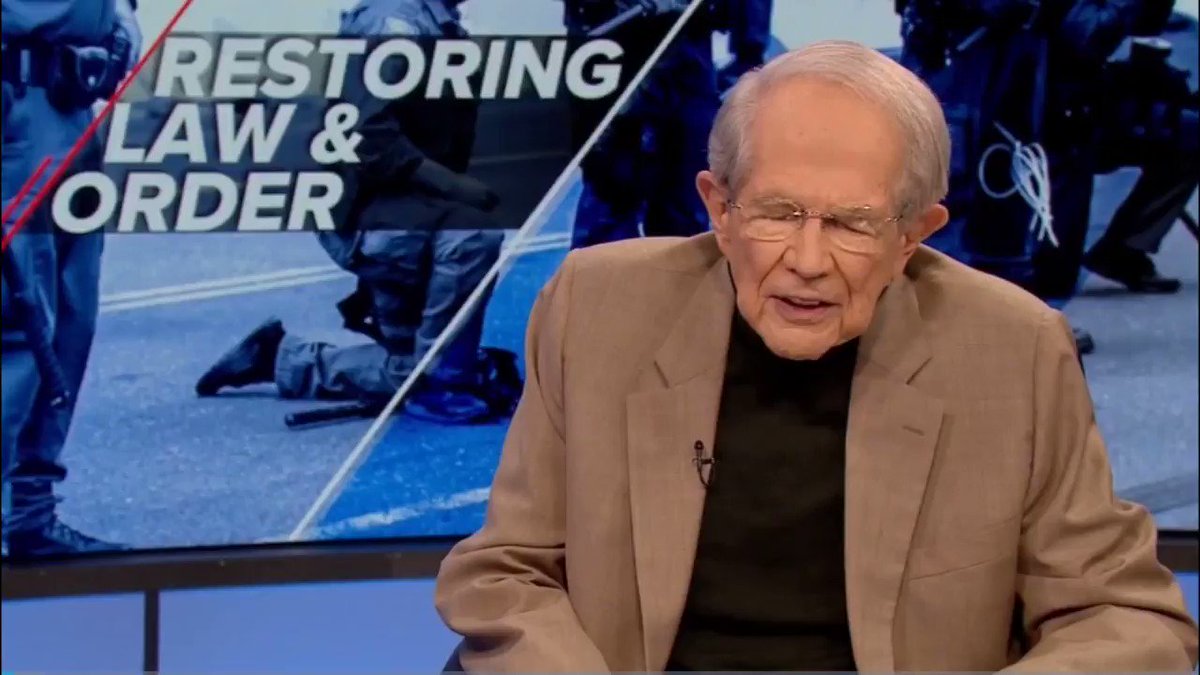 There are no "blue lives," only blue uniforms
@tonygoldmark
Pat Robertson is criticizing Trump, Logan Paul is acknowledging his white privilege, even George W. Bush is basically saying black lives matter. This is truly a historic day for "The Worst Person You Know Just Made A Great Point."
03 Jun, 02:36 AM UTC

Victoria Brownworth #NoJusticeNoPeace
@VABVOX
Imagine being such a monster that 900 year old Pat Robertson says your behavior is not cool.
02 Jun, 11:04 PM UTC

The Volatile Mermaid
@OhNoSheTwitnt
Trump has managed to lose Ann Coulter and Pat Robertson. Soon the only people supporting him will be his 2 idiot sons who he doesn’t like and your racist relative you had to block on Facebook because he was always complaining about illegal immigrants stealing his job or whatever.
03 Jun, 05:00 AM UTC

@tomsegura
When Pat Robertson is the voice of reason you're in trouble https://t.co/zlqvBpoAfu
03 Jun, 03:18 AM UTC

The Hoarse Whisperer
@HoarseWisperer
I honestly did not think it was possible to lose Pat Robertson over being too shitty on racism and yet... https://t.co/fBTq3Rzylv
03 Jun, 01:42 AM UTC

@PalmerReport
Donald Trump's night so far: - Defense Secretary Mark Esper says Trump told him they were going to a bathroom, not to the church - Pat Robertson rips Trump to shreds - Trump losing allies by the minute - Trump is going to prison - Its still only 10pm https://t.co/MikW0J2pXy
03 Jun, 02:08 AM UTC

@cmclymer
Pat Robertson is criticizing Trump for his actions against protestors. At this point, 2020 is just flat-out trolling us. https://t.co/X4gAqdAoZt
03 Jun, 01:23 AM UTC

@tariqnasheed
Damn..Pat Robertson is a triple OG white supremacist. So when he says Trump's response to the anti-Black racism protests was wrong, that really says a lot about Trump. https://t.co/II23Rihd5O
03 Jun, 01:35 AM UTC

Oliwoot
@OliWoot
@RightWingWatch You know it's bad when even Pat Robertson thinks you are uncool...
02 Jun, 06:54 PM UTC

@johnpavlovitz
When you're not cool enough for Pat Robertson. @realDonaldTrump is a loser among losers.
03 Jun, 01:21 AM UTC

Katelyn Beaty
@KatelynBeaty
Joel Osteen showing up at a Black Lives Matter protest and Pat Robertson calling out Trump for not being cool ... what is going on, y'all??
03 Jun, 02:36 AM UTC

@Yair_Rosenberg
We are now in the timeline where I agree in Pat Robertson, and I'm beginning to thing the 2020 writers are just messing with us now.

@PalmerReport
Having been condemned by everyone from military leaders, to the Catholic and Episcopal churches, to whatever the fuck Pat Robertson is, Donald Trump is now awake in bed trying to figure out which group of voters he can alienate tomorrow.
03 Jun, 06:28 AM UTC

JRehling
@JRehling
Ben Sasse, Mitt Romney, Pat Robertson, and George W. Bush all think that Trump is messing this up. He's blowing it.
03 Jun, 02:37 AM UTC

Austin Fischer
@austintfischer
When PAT ROBERTSON (!!!) criticizes a Republican, and says what Trump did “wasn’t cool”, well, you know it wasn’t cool. Also you know the end must be near. https://t.co/F42aJmORbR
02 Jun, 09:22 PM UTC

John Nichols
@NicholsUprising
How flat-out fascist do you have to go to lose Pat Robertson? We have the answer. https://t.co/m60R4qqPd3
03 Jun, 03:58 AM UTC

PoliticsVideoChannel
@politvidchannel
- Pat Robertson calls out Trump - rep. steve king loses in the GOP primary what a week so far.
03 Jun, 10:30 AM UTC