Pelosi is trending on Twitter. Popular tweets on Pelosi.

Duty To Warn 🔉
@duty2warn
Pelosi to Milley: "What I'm saying to you is that if they couldn't even stop him from an assault on the Capitol, who even knows what else he may do? And is there anybody in charge at the White House who was doing anything but kissing his fat butt all over this?" (more)
14 Sep, 09:12 PM UTC

Duty To Warn 🔉
@duty2warn
Pelosi continued: "You know he's crazy. He's been crazy for a long time." According to Woodward and Costa, Milley responded: "Madame Speaker, I agree with you on everything."
14 Sep, 09:12 PM UTC

☀️👀
@zei_squirrel
AOC began her political career storming pelosi's office along w/ climate activists demanding direct action, and now she's wearing a designer "tax the rich" dress at the met while everyone there fawns over her. it's over, that project failed, you're just doing celeb cultism now
14 Sep, 12:51 AM UTC

@KamVTV
Well well well… it was Nancy Pelosi who pushed General Milley to act against Trump. That’s what I call a coup.
14 Sep, 11:46 PM UTC

@JenGriffinFNC
Pentagon officials: Gen Milley did not try to insert himself in the chain of command regarding the launch of nuclear weapons, but he made sure everyone knew what their roles were and what they weren’t. They reviewed lawful launch procedures following Pelosi phone call.
14 Sep, 10:28 PM UTC

@JohnJHarwood
"You know he's crazy," Pelosi told Milley. "He's been crazy for a long time." "Madam Speaker, I agree with you on everything," responded the chairman of the Joint Chiefs of Staff.
14 Sep, 04:30 PM UTC

Terminalcwo
@terminalcwo
It wasn’t just General Milley who was involved in talks. It looks like Speaker Pelosi was complicit in the subversive efforts to undermine our national security. #milley #CCP #AntiStateExposed https://t.co/YOQKsgxrhq
14 Sep, 09:39 PM UTC

@jeremyherb
There’s lots of intriguing new details in Peril, including a transcript of Pelosi’s call with Milley on Jan. 8, one of the things that prompted him to act. “Is there anybody in charge at the White House who was doing anything but kissing his fat butt all over this?” Pelosi asked
14 Sep, 03:59 PM UTC

@BryanDeanWright
Pelosi made herself president and the military went along with it. #Treason 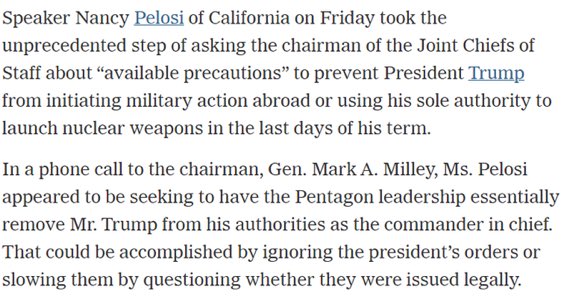 The Columbia Bugle 🇺🇸
@ColumbiaBugle
What in the f*cking hell?! Pelosi needs to be questioned along with Milley. Milley: "Madam Speaker, I agree with you on everything." 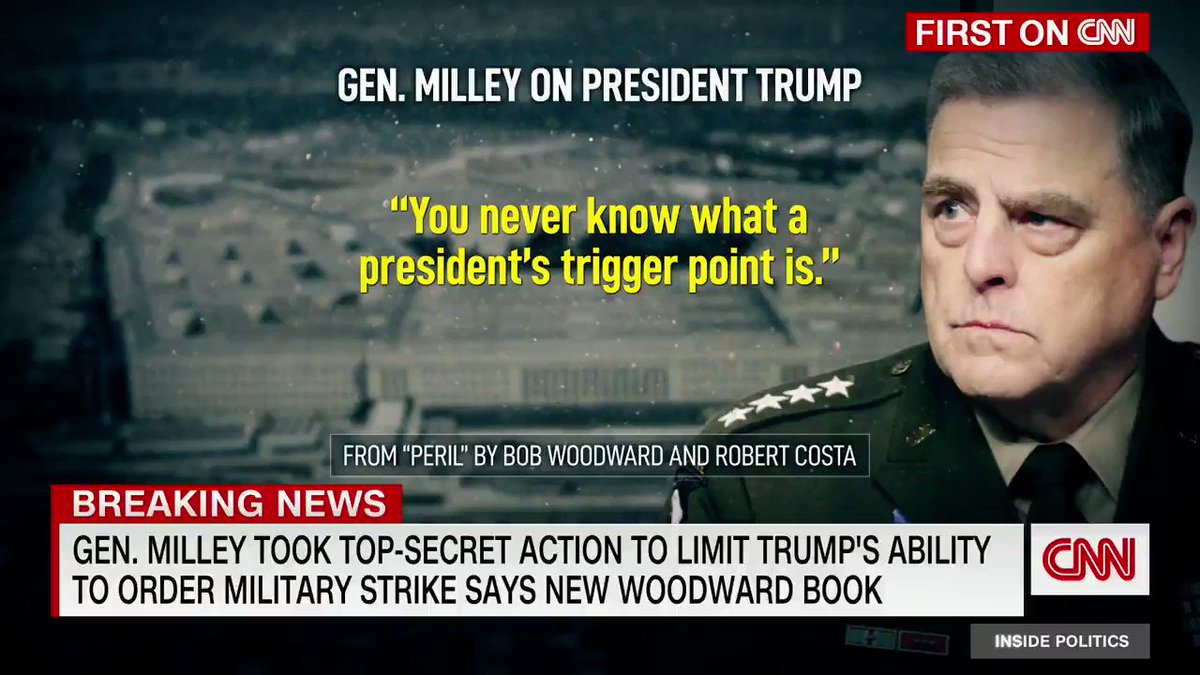 Duty To Warn 🔉
@duty2warn
This is a fun read about the book. Milley agreeing with Pelosi that Trump is nuts, Trump going at it with Pence, can't wait for this book. https://t.co/vqXLF6zF1D
14 Sep, 09:00 PM UTC

@JordanSchachtel
And this is where Pelosi and the nuclear codes story comes in. The Pentagon + Dems got together and effectively stripped President Trump of his power. A military coup sanctioned by the Uniparty in D.C.
14 Sep, 10:44 PM UTC

Ron Placone
@RonPlacone
The people stoked over AOC’s dress are the people who would’ve been stoked over Nancy Pelosi ripping paper if they were older. US politics is absolute sycophantic performative trash full of hyper tribal dullards who are convinced Wall Street sponsored puppets are on their side.
14 Sep, 03:11 AM UTC

Badd Company
@BaddCompani
Guess What Folks, China does NOT want to go to War with Us. General Milley actually called them to reassure them that trumpf would be stopped at all costs. trumpf wanted to start 'Armageddon' Milley and Pelosi Stopped Him from Killing us All!!!
14 Sep, 04:40 PM UTC

Nick Santucci
@NickSSantucci
AOC wore a “tax the rich” dress to the Met Gala, where a single ticket costs more than the median income in Trumbull County. AOC, Nancy Pelosi, and their friends pretend to stand for the working class but they don’t represent everyday Americans.
14 Sep, 02:53 PM UTC

Badd Company
@BaddCompani
The Commander in Chief was Overruled by the Joint Chiefs of Staff China was reassured by General Milley "We Got This" "He's Crazy, You know He's crazy, He has been crazy for a long time" Pelosi to General Milley Milley made sure everyone was on board He's a BADD ASS!!!
14 Sep, 05:22 PM UTC

@CapehartJ
Speaker Pelosi out here saving the republic behind the scenes like…. #Peril #woodwardandcosta 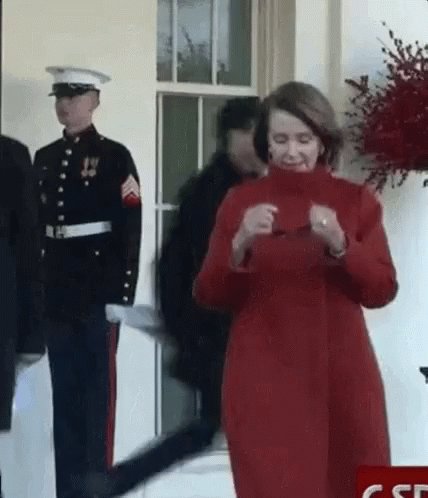 AleasaF
@AFulmer8
I can't even keep up with how many have committed treason in the government, but yet they roam free to commit more traitorous acts. If it were one of us, they would have already had us in front of the firing squad. Feel free to add to the list. Biden Milley Pelosi
14 Sep, 11:51 PM UTC

First Words
@unscriptedmike
Does anyone believe that Milley would have committed his treason without the encouragement of Pelosi?
14 Sep, 10:51 PM UTC

Black in the Empire
@blackintheempir
AOC went from "Defund the Police" to "Vote Present" to help Pelosi give more money to police.
14 Sep, 09:25 PM UTC