@politico
The Supreme Court has voted to strike down Roe v. Wade, according to an initial draft majority opinion written by Justice Samuel Alito and obtained by POLITICO. “We hold that Roe and Casey must be overruled,” Alito writes. https://t.co/nl3JFLx9xg
03 May, 12:39 AM UTC

@ighaworth
My pansexual queer 3-year-old child of color, Pebble Solomon Haworth, just read the Politico SCOTUS leak, looked up at me and asked, through tears, “non-birthing parent, why would Ron DeSantis do this?”
03 May, 04:25 AM UTC

@samsanders
One thing I’ll say about @politico: they don’t hold vital reporting hostage until a book release
03 May, 03:25 AM UTC

@PalmerReport
That draft memo obtained by Politico does NOT mean the Supreme Court has struck down Roe v. Wade. It means the court INTENDS to strike it down when the decision comes down in a couple months. We now need MASSIVE protests to pressure the court not to go through with this travesty.
03 May, 01:00 AM UTC

@neal_katyal
THREAD My Thoughts on @politico story saying the Court voted to say Roe v. Wade is fully overruled. I’ve quickly scanned the draft opinion and it appears legitimate. This means there was a preliminary vote to fully overrule Roe V Wade and that a majority of the Court agreed.
03 May, 12:54 AM UTC

Pièce de Résistance
@PieceDeReSister
My mother was a registered nurse in the years before Roe, and tells stories of women & girls being eviscerated, sterilized, and killed by back alley abortions. By overturning Roe, #SCOTUS isn’t saving a single baby. It is killing countless women & girls. #RoeVWade https://t.co/ho82zuvIMc
03 May, 01:54 AM UTC

Angry Staffer 🌻
@Angry_Staffer
FWIW, there’s not much the GOP wants less than Roe to actually be overturned. If the Politico scoop is correct, the GOP is now the dog who caught the car. Roe was always a shiny thing to campaign on (much like repealing Obamacare) but never something they actually wanted to do.
03 May, 12:55 AM UTC

@nhannahjones
“It wasn’t until 1979—a full six years after Roe—that evangelical leaders..:seized on abortion not for moral reasons, but…because the anti-abortion crusade was more palatable than the religious right’s real motive: protecting segregated schools.” https://t.co/bnWHDdfL2I
03 May, 01:46 AM UTC

@govkristinoem
If this report is true and Roe v. Wade is overturned, I will immediately call for a special session to save lives and guarantee that every unborn child has a right to life in South Dakota. https://t.co/oIiGibCP7B
03 May, 01:39 AM UTC

@SCOTUSblog
JUST IN: The Supreme Court confirms the authenticity of the draft opinion revealed last night by Politico. The chief justice has ordered an investigation into the leak. 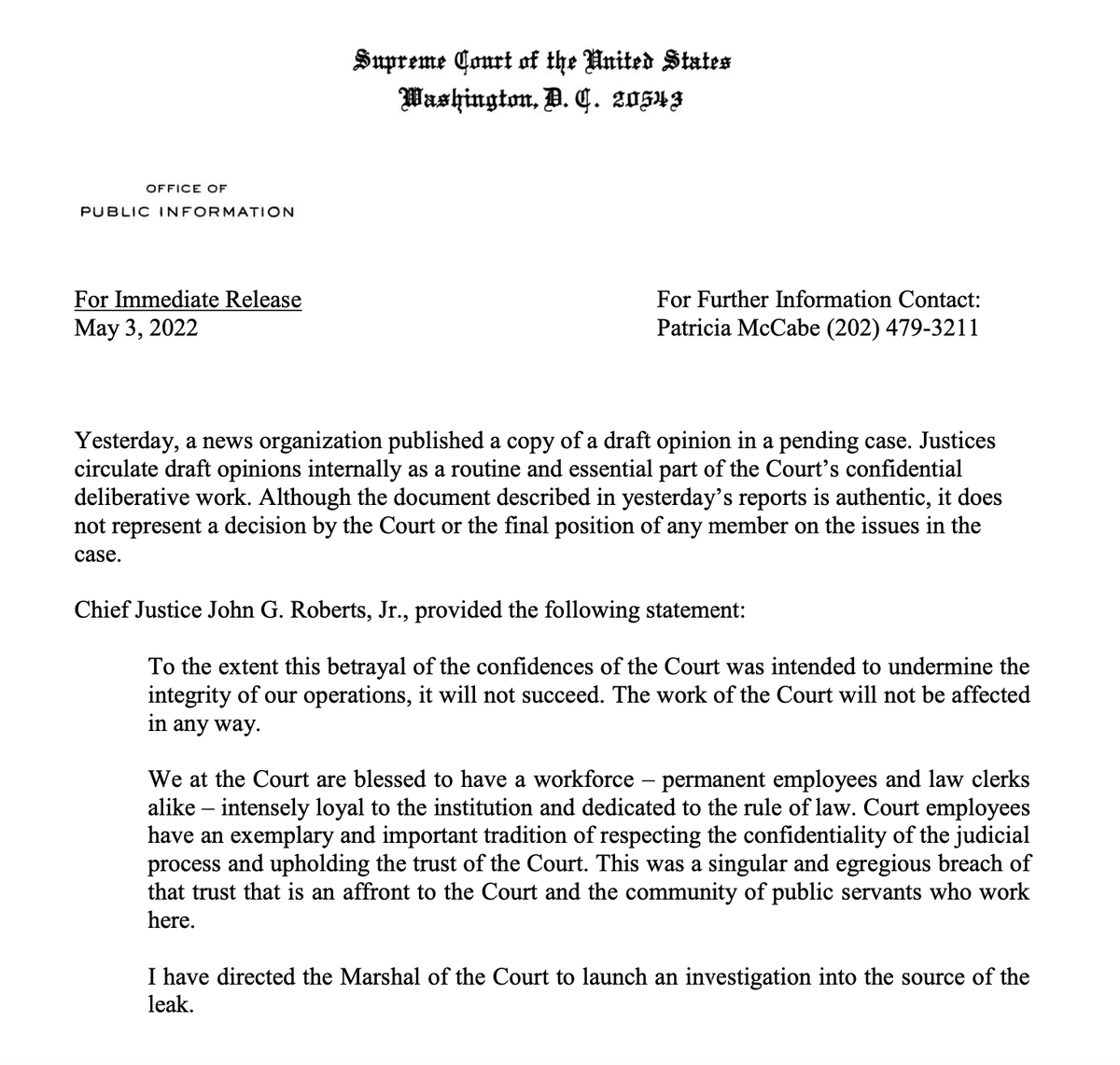 @nytimes
Breaking News: The Supreme Court has privately voted to strike down Roe v. Wade, according to a leaked draft of its majority opinion published by Politico. https://t.co/DVfKUd6J1l 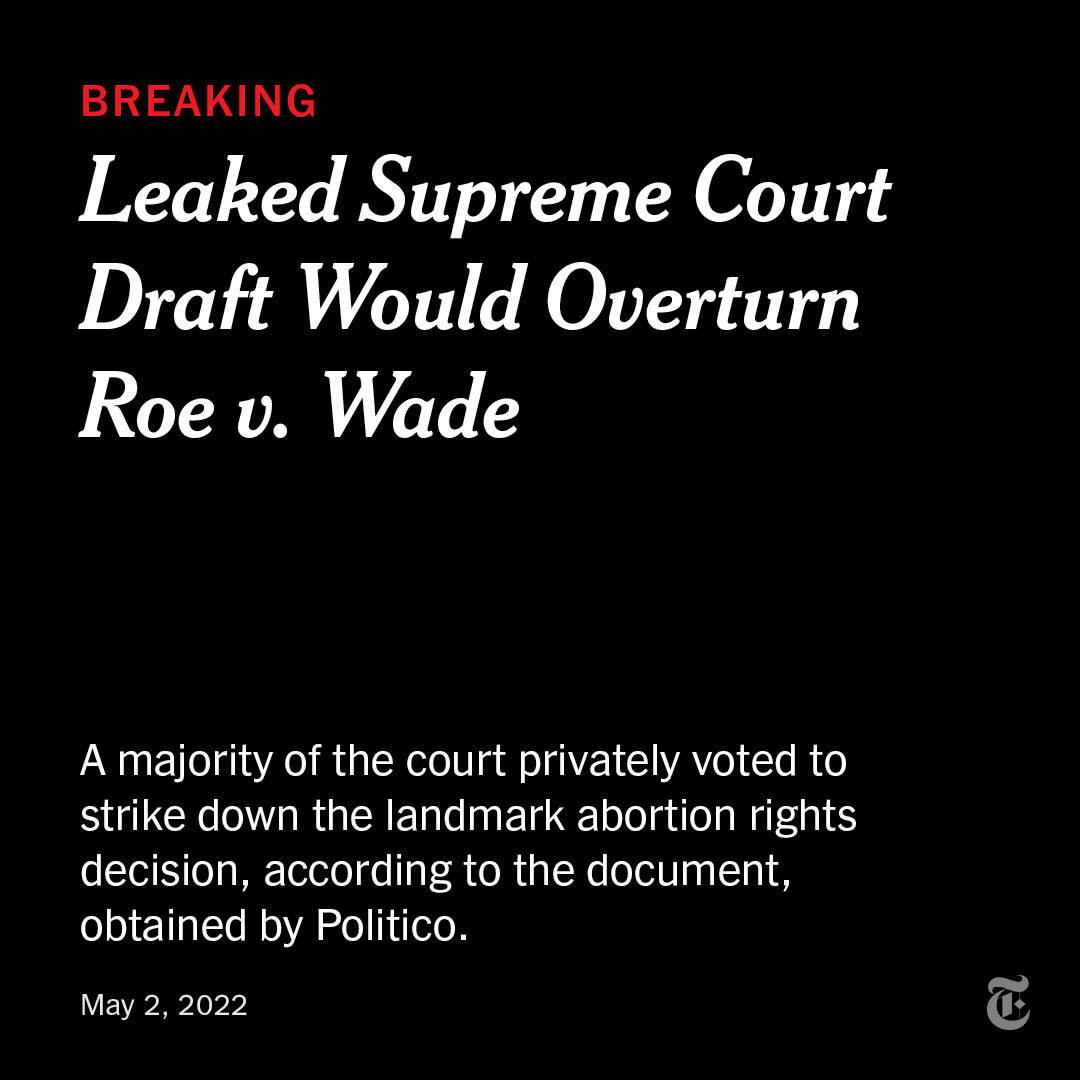 @elizaorlins
When we told you this was going to happen, you told us to "calm down." Fuck. We knew this was coming. We knew. #RoevWade https://t.co/vokrbED1pV
03 May, 12:46 AM UTC

Amy Kapczynski
@akapczynski
Timing: This draft was circulated in Feb. If a liberal was mad about it, why wait until April to send it to Politico? The op will be out in June. What are the benefits of releasing it early? And a BIG downside – the focus on the leak itself instead of the opinion.
03 May, 02:19 PM UTC

Eric Matheny 🎙
@EricMMatheny
Insurrection is not some dickhead with Viking horns carrying a flag in the Capitol Rotunda. It’s a Supreme Court employee leaking confidential material to Politico to incite the most radical of their base to riot and threaten the lives of Justices with whom they disagree.
03 May, 12:03 PM UTC

FP Smith
@fpsmith303
@politico Rich women and politicians' girlfriends will always have access. Remember that.
03 May, 01:04 AM UTC

@womensmarch
We’re horrified, saddened, and livid. If you are too, then now is the time to show up and show them our movement won't back down from protecting our reproductive rights. Tomorrow, at 5pm your local time, we’re rallying across America for abortion rights: https://t.co/sqXWyOs9He https://t.co/TlZTQJR0Rn
03 May, 03:13 AM UTC

@katie_robertson
Politico employees have been advised to be vigilant about who enters elevators with them at the office, and to consider removing any personal details from social media accounts that identify them as Politico staff, according to an internal memo
03 May, 04:42 PM UTC

Duty To Warn 🔉
@duty2warn
Just In: Chief Justice Roberts issues a statement that confirms the draft opinion/document from Politico is real but says it doesn't represent a final decision of the court. He adds that he's opening an investigation into the leak.
03 May, 03:33 PM UTC

Sabina Spigner MS MPH 🌈
@SabinaSpigner
Abortions will continue. Unsafely. People with uteruses seeking/needing abortions will die. Reproductive justice and access is a human right. Autonomy over your body is a human right. Ppl w/ uteruses are humans. This is bad. Very. Very. Bad. (Insert many swear words) https://t.co/qbgitsKo4d
03 May, 02:01 AM UTC