Quavo is trending on Twitter. Popular tweets on Quavo.

ice
@bigolju
people are being really gross about Quavo graduating high school at 29. I don’t like y’all. he looked so happy in those pictures and that’s all that matters.
22 May, 04:06 PM UTC

💎
@dammitdymond
Doesn’t matter how wealthy you are. The pursuit of education is not and never will be embarrassing. Congrats to Quavo! https://t.co/SBuNDFLIW5
22 May, 03:25 PM UTC

DUFF.
@Duffgotjuice
Judging everyone who's clowning Quavo for getting his GED @ 29. You're a piece of shit honestly.
22 May, 02:35 PM UTC 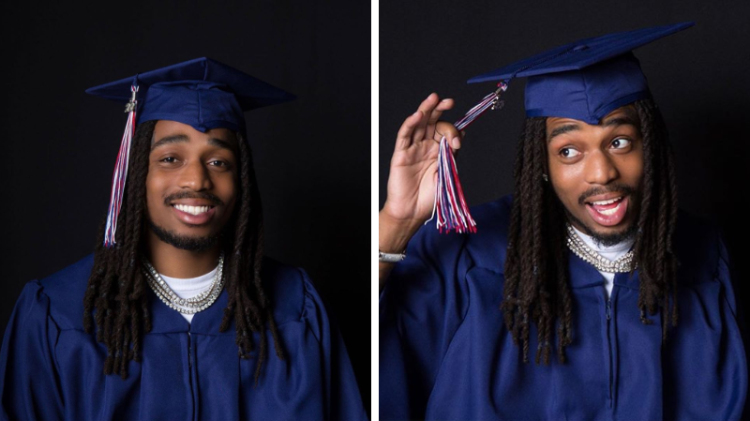 Lavender Macedon
@NewMacedonFlow
I cant believe people are bashing Quavo for graduating from high school. Everyone doesn't have the same journey. The fact that he went back and finished is amazing.
22 May, 03:41 PM UTC

@CNN
Rapper Quavo of the trio Migos announced on Instagram that he's joining other graduating seniors in the class of 2020 at the age of 29. To celebrate, he dropped a new song. https://t.co/oEv3vH6FDG
23 May, 12:43 AM UTC

HOOD VOGUE is tired of poverty
@itskeyon
Half of y’all grandfathers and grandmamas ain’t get to finish highschool either idk why y’all got so much mouth for quavo chile
23 May, 02:19 AM UTC

Ancient Book of Bitchcraft ✨📖✨
@softjunebreeze
Quavo looks so happy in his HS graduation photos. 🥺 But if you think about it, we're in the midst of a global crisis & he still managed to reach a major life milestone. That kind of joy can't be manufactured. Let that young man enjoy his accomplishment.
22 May, 09:30 PM UTC

Mommas Brightest Star 🌟
@TruBluSoDamnCoo
don’t trust nobody who laughed at quavo graduating late.
23 May, 08:15 AM UTC

alena🤍
@alenabursaw
why are people bashing Quavo for graduating high school? WHO CARES if it’s at age 29. he’s made MILLIONS, WITHOUT the diploma. graduating high school is an extremely huge accomplishment. we should be showing him respect bc he showed that you should never give up on something.
22 May, 05:22 PM UTC

Grey
@grrracita
re:ppl reacting negatively to Quavo getting his HS diploma - we've been programmed to follow the same path as everyone else. so, when u do something different, based on ur values & vision for life, ppl love to hate, because they've never dared to branch off the beaten path
23 May, 08:19 AM UTC

Zuly
@_honestlybro
It’s fucked up that ppl making fun of quavo getting his diploma at his age what’s wrong with him accomplishing a goal ... ppl don’t know how much courage it takes to go back to school at his age so props to him , I know heads that are scared to go back
22 May, 04:39 PM UTC

🥀
@BabyRose120
@mafianurse sorry but migos are truly overrated to me. yes, they have some really hype songs that are good to listen to when you’re in the mood to partying things like that, but lyrically their songs have little to offer Also i’ll never understand why Quavo is the most hyped one
23 May, 11:07 AM UTC

VeeBae 💕
@ThickHerCurves
This man actually finished high school. Y’all call it “embarrassing”, but did Jay-Z ever graduate? How ‘bout Lil Wayne?!?! Let Quavo be proud cuz there’s niggas out here who will never achieve that level of greatness!!! https://t.co/QHxzU7wcjl
23 May, 11:15 AM UTC

Tobi
@OfficialTobiGb
Congrats to Quavo for completing something 1 in 5 black men don’t get to do, but we shouldn’t push the narrative that a diploma/GED is valuable cause he’s been a multi-millionaire for years, who is in a better position than most people around his age. https://t.co/tlW0YrhgJc
23 May, 11:11 AM UTC