#RedSox is trending on Twitter. Popular tweets on #RedSox.

@RedSox
Statement from the Boston #RedSox and Alex Cora: 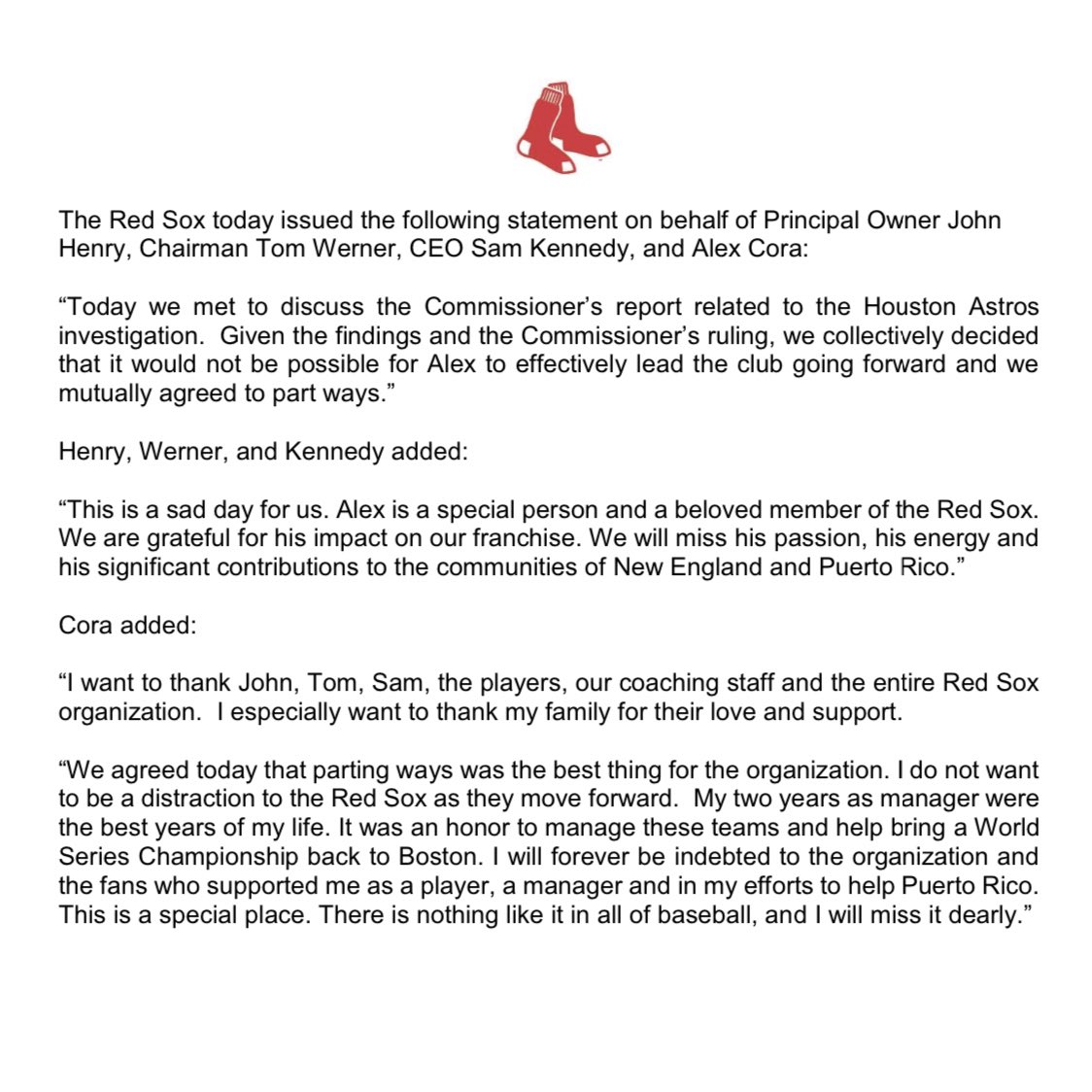 @Joelsherman1
#RedSox were worried about the distraction of having Cora, who guided them to a WS. What do the #Mets think of Beltran, who has given them zero games as a mgr to date and whose accomplishments as NYM mgr to date is lying to reporters about what he did when he was with Houston.
15 Jan, 12:39 AM UTC

@Joelsherman1
I have been told that the disimissal of Cora does not stop MLB’s investigation into the #RedSox alleged cheating in 2018 nor does it stop MLB from suspending Cora for his parts with the ’17 #Astros and the ’18 #RedSox
15 Jan, 12:37 AM UTC

@BNightengale
Boston #RedSox manager Alex Cora: "I do not want to be a distraction to the Red Sox as they move forward.''
15 Jan, 12:37 AM UTC

@PeteAbe
Internal candidates #RedSox could consider: Ron Roenicke, Carlos Febles, Jason Varitek. Within the family: Mike Lowell. Also: Sam Fuld, Mark Loretta, Eric Chavez, Will Venable. Also have to weigh whether to get an experienced mgr. to work with Bloom, a new GM.
15 Jan, 02:00 AM UTC

@JimBowdenGM
#RedSox and #Astros should consider hiring former #Giants Manager Bruce Bochy since both teams are capable of contending and winning in 2020.
15 Jan, 12:38 AM UTC

JoezMcfly🇩🇴
@JoezMcfLy
This is how i picture anyone defending anyone associated with this #astros and #redsox scandel https://t.co/r2PLWpr5Bv
15 Jan, 01:09 AM UTC

@JoeGiza
Good news for the #RedSox is 3 of the last 4 times they named a new manager they’ve won the World Series that year (straight out of @RochieWBZ sunshine)
15 Jan, 01:25 AM UTC

@davidwade
I bet Alex Cora would have been a great manager-- without cheating. Players seemed to love him. Handled the Boston grind very well. Had a good feel for the game. What he did wasn't okay though... and this is the right move. #RedSox
15 Jan, 12:45 AM UTC

@KenDavidoff
My column on why Carlos Beltran must come clean, if the #Mets even give him a chance to do so. More updates coming: https://t.co/PDkQlERoAn #Astros #RedSox
15 Jan, 01:54 AM UTC

@BostonGlobe
This was simply not survivable for Alex Cora. He disgraced the #RedSox with his role in two cheating scandals, and he needed to go, writes @Dan_Shaughnessy. https://t.co/MVYL7INJWi
15 Jan, 02:33 AM UTC

@TomCaron
The #redsox and Alex Cora parted ways today. This is a sad day for #baseball, the Sox, and most of all for Cora. He made a major mistake and that lapse of judgement cost him dearly. Soon it will cost the Sox… https://t.co/2A23uCvuAd
15 Jan, 03:59 AM UTC

@davidwade
One part of this cheating scandal/punishment people haven't been focusing on... is the draft picks. #Astros lost 1st and 2nd rounders for two years. IF the #RedSox get something similar it will have a profound impact on an already weak farm system.
15 Jan, 12:47 AM UTC

Gais Nemri ✝️
@GaisNemri
Now if they take away the WS titles from the #Astros and #Redsox all will be good in baseball. #AlexCora #MLB https://t.co/v4y5aAoYbR
15 Jan, 12:37 AM UTC

Dynasty Weekly with Nohelty and Pendleton
@Dynastyweekly
The outing of Cora can also mean one thing... Red Sox first year managers since francona went on to win the World Series Francona (2004) Farrell (2013) Cora (2018) Only managers who haven’t won it in their first year in the last 15 years? Good ole Bobby Valentine 2012 #redsox
15 Jan, 04:03 AM UTC 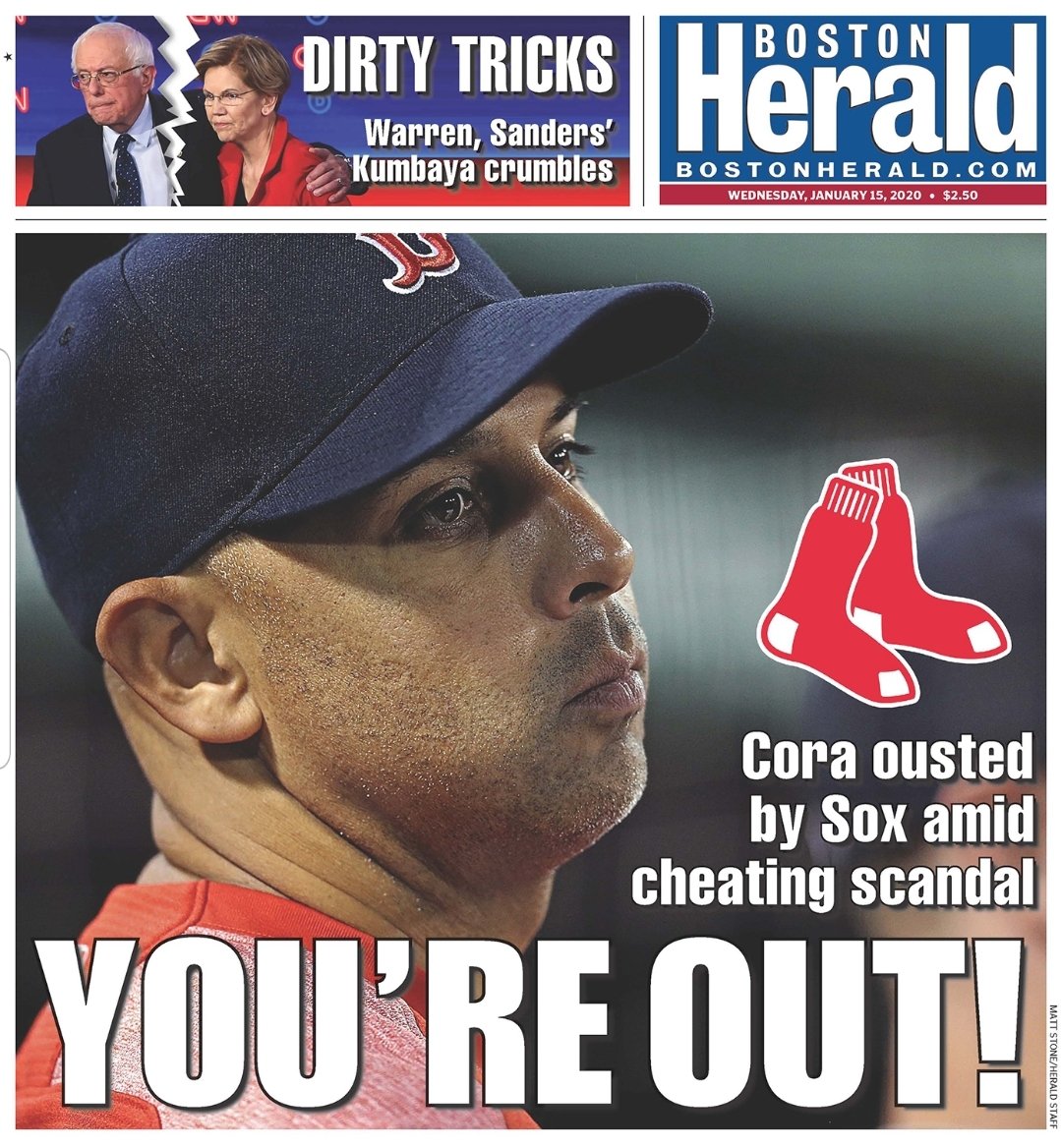 Nick Quaglia
@NickQuag
Hear me out. The next #RedSox manager should be Phil Brickma. He’s ready to make the leap from pitching coach to manager. Who says no? https://t.co/M7DPzcCuHk
15 Jan, 03:11 AM UTC

Red Sox Nation Stats
@RSNStats
Cora's era with #RedSox ends in tatters and thoughts of what might've been - https://t.co/5SqmJ2PVnu https://t.co/kDdgYd9rCg
15 Jan, 04:13 AM UTC