Haggis_UK 🇬🇧 🇪🇺
@Haggis_UK
Richard Foord(LibDem) wins the Tiverton & Honiton by-election. "I served as an officer in the British army for 10 years Mr Johnson... leadership means acting with decency & integrity... & your behaviour makes a mockery of leadership.. you're unfit to lead... so resign" https://t.co/psGXyKqiX7
24 Jun, 03:36 AM UTC

Tom Larkin
@TomLarkinSky
New Lib Dem MP Richard Foord damning on the PM's impact in this race to @SamCoatesSky: "Johnson came up on every doorstep...Opposition parties can't oust him but Conservative MPs can. Tonight's result shows it would be a real mistake to retain him. It could be electoral suicide"
24 Jun, 03:18 AM UTC

@nickgutteridge
Lib Dems overturn 24,000 Tory majority in Tiverton and Honiton and secure their own majority of more than 6,000. Winning candidate Richard Foord says the result has ‘sent a shockwave through British politics’ and sends a ‘loud and clear message that it’s time for Boris to go.’
24 Jun, 03:08 AM UTC 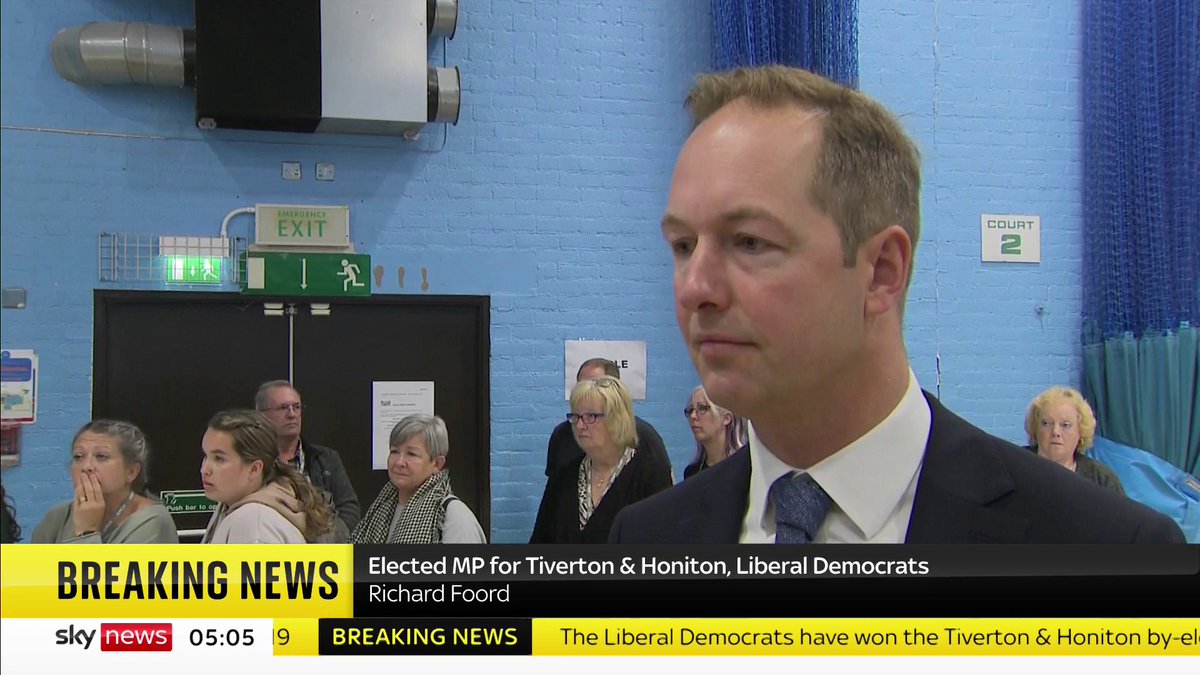 @Channel4News
"The people of Tiverton and Honiton have spoken for Britain... it's time for Boris Johnson to go - and go now." Newly elected Lib Dem MP Richard Foord - who has overturned a 24,000 Tory majority - says the PM has made "a mockery" out of leadership and needs to resign. 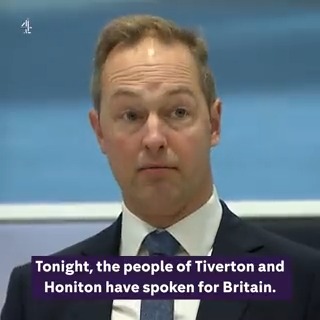 Baroness Patricia of Plague Island #JohnsonOut
@Patrici89225734
To all the voters of Tiverton/Honiton and Wakefield a very big thank you from me for caring about the future of our Country! Congratulations to Richard Foord and Simon Lightwood 🍾🍷👏Hopefully we have taken our Country back!
24 Jun, 06:13 AM UTC

Claire Wright 💙
@ClaireWrightInd
Just waking up to an absolutely PHENOMENAL win for the Libdems in one of the safest Tory seats in the country. A massive congratulations to the new Tiverton and Honiton MP, Richard Foord! No Tory seat is safe now! #TivertonandHoniton https://t.co/X150fkbhyL
24 Jun, 04:18 AM UTC

@LukePollard
I’m on @BBCDevon in a moment to congratulate Richard Foord and Simon Lightwood on winning yesterday’s by-elections. It’s been a very bad night for the Conservatives, a very bad night for Boris Johnson. The PM should resign. He won’t, so we need to vote them out.
24 Jun, 06:15 AM UTC

@SkyNews
New MP Richard Foord uses his victory speech to call for Prime Minister Boris Johnson "to go, and go now", promising his constituents: "I will never take you for granted" https://t.co/jgU6owpjAT
24 Jun, 07:57 AM UTC

@itvnews
Liberal Democrat Richard Foord has been elected as the new MP for Tiverton and Honiton, in a landmark election result https://t.co/j08scKgejR
24 Jun, 06:02 AM UTC

@BBCBreakfast
'It's the biggest by-election victory our country has ever seen'' The Liberal Democrats overturn a 24,000 Tory majority to win Tiverton & Honiton by more than 6,000 votes. The new MP Richard Foord spoke on #BBCBreakfast https://t.co/6lEYPUY4J6 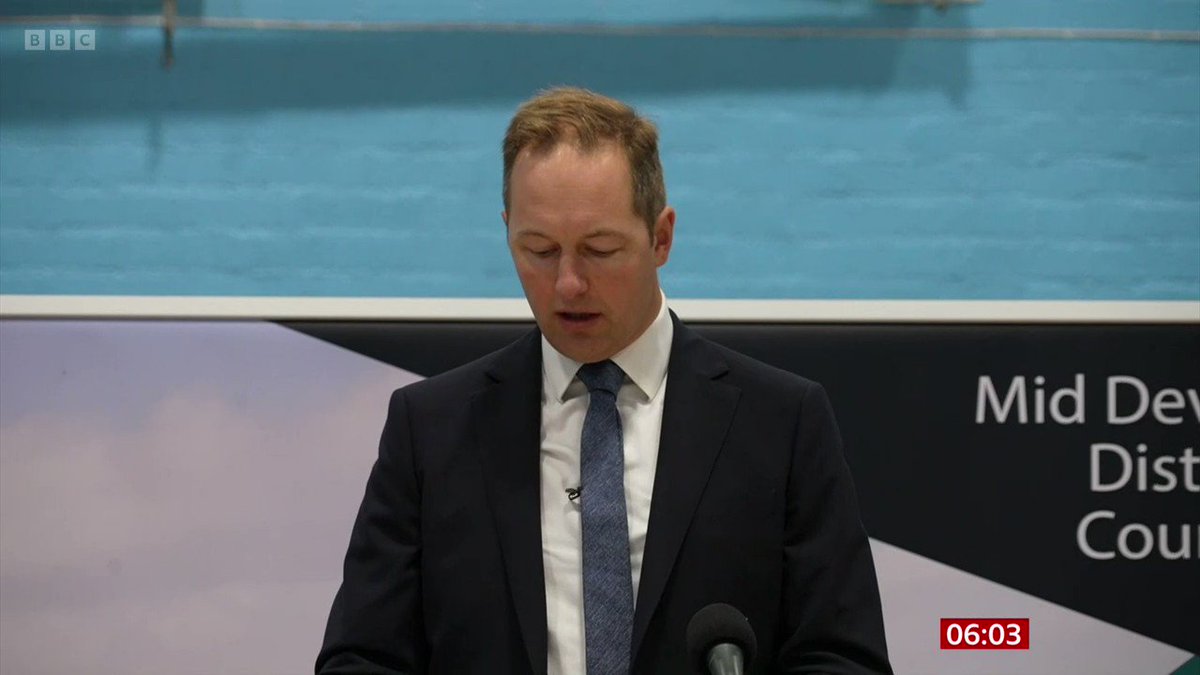 Immigrant Dave - FBPE
@davebancroft
Tories lose two key byelections on same night in Wakefield and Tiverton and Honiton. Richard Foord, defeated Tory 24k majority by 6,144 votes to take a constituency, it's believed to be biggest numerical majority ever overturned in a by-election. https://t.co/WtRM1X3DKf
24 Jun, 05:14 AM UTC

@PA
#Breaking Liberal Democrat Richard Foord has won the Tiverton and Honiton by-election, taking the seat which the Tories had held with a majority of more than 24,000.
24 Jun, 03:10 AM UTC

Sharkey
@JeremyvanHagen
@theousherwood Richard Foord & Simon Lightwood together with their respective teams did fantastic work. The sheer scale of the victory in Tiverton & Honiton is a tribute to the hard work of the people involved.
24 Jun, 05:36 AM UTC

LiberalHistoryToday
@LibHistoryToday
The Tiverton and Honiton by-election is one for the history books - it is the biggest majority ever overturned in a by-election. The Conservatives won this seat with a majority of 24,239 over Labour, and Richard Foord came from third to overturn that majority.
24 Jun, 06:07 AM UTC

Dr K Fearnley
@fearnley_k
“Their leader Ed Davey hails the ‘biggest by-election victory our country has ever seen’ while winning candidate Richard Foord says it has sent a shockwave through politics”
24 Jun, 08:42 AM UTC

Hugh Dorins
@thehugeorange
Did the Tories give up on Tiverton. Richard Foord was v strong but Helen Hurford was the worst candidate I have seen anywhere ever (admit I didn’t follow @SuellaBraverman campaign). #TacticalVoting it works
24 Jun, 08:37 AM UTC