Richmond is trending on Twitter. Popular tweets on Richmond.

@atrupar
Rep. Richmond's last floor speech: "In the first impeachment, Republicans said, 'we don't need to impeach him because he learned his lesson.' We said if we didn't remove him, he would do it again. Simply put, we told you so. Richmond out." 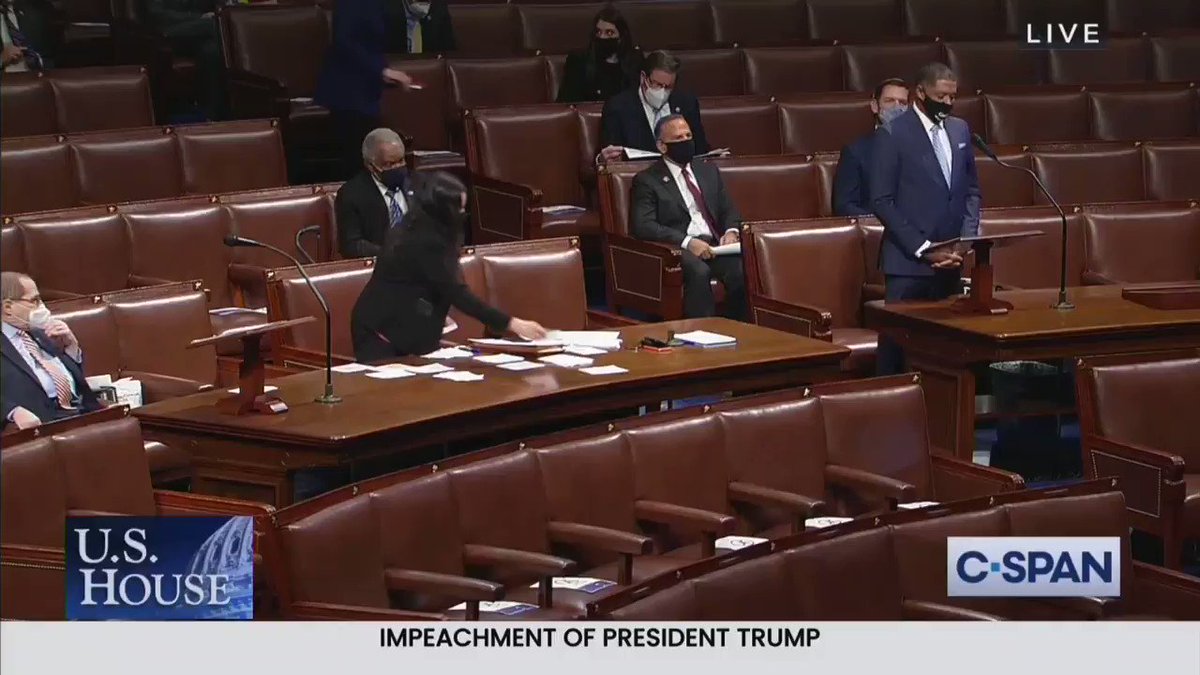 @Yamiche
Rep. Cedric Richmond underscores how raw the anger is in the House. He says some in GOP may be "co-conspirators" of the mob that stormed the Capitol. He adds Republicans defending "this unfit president" in the name of unifying U.S. illustrate the "climax of foolishness."
13 Jan, 06:06 PM UTC

@Phil_Lewis_
“We told you last time if we didn't impeach him, this would happen again. Simply put, we told you so. Richmond out,” - Rep. Cedric Richmond, in his last speech before heading to the Biden administration 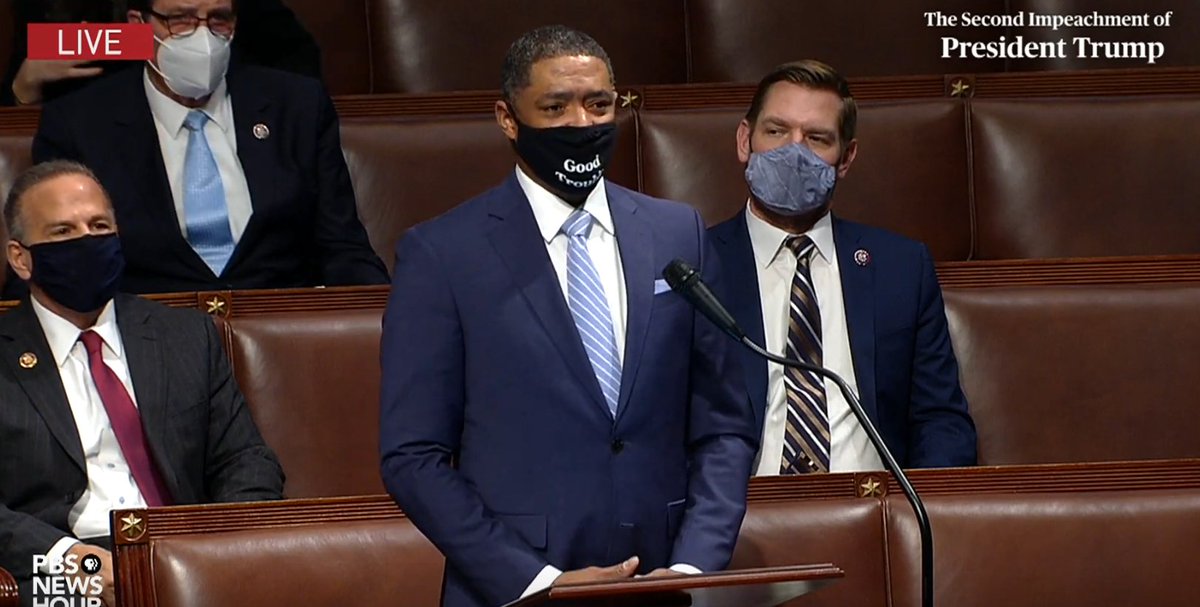 @sarahnferris
Rep. Cedric Richmond is giving a thundering floor speech now, his final one before leaving the House to join Biden administration. Does not mince words on GOP, saying, "some of my colleagues, some of whom may well be co-conspirators." "Richmond out" he says as he leaves.
13 Jan, 06:01 PM UTC

@nowthisnews
Rep. Richmond in his final floor speech before joining Biden admin: ‘[Republicans] suggest that we shouldn’t punish Trump for his actions in order to unify the country. That is the climax of foolishness … Simply put, we told you so. Richmond out.’ 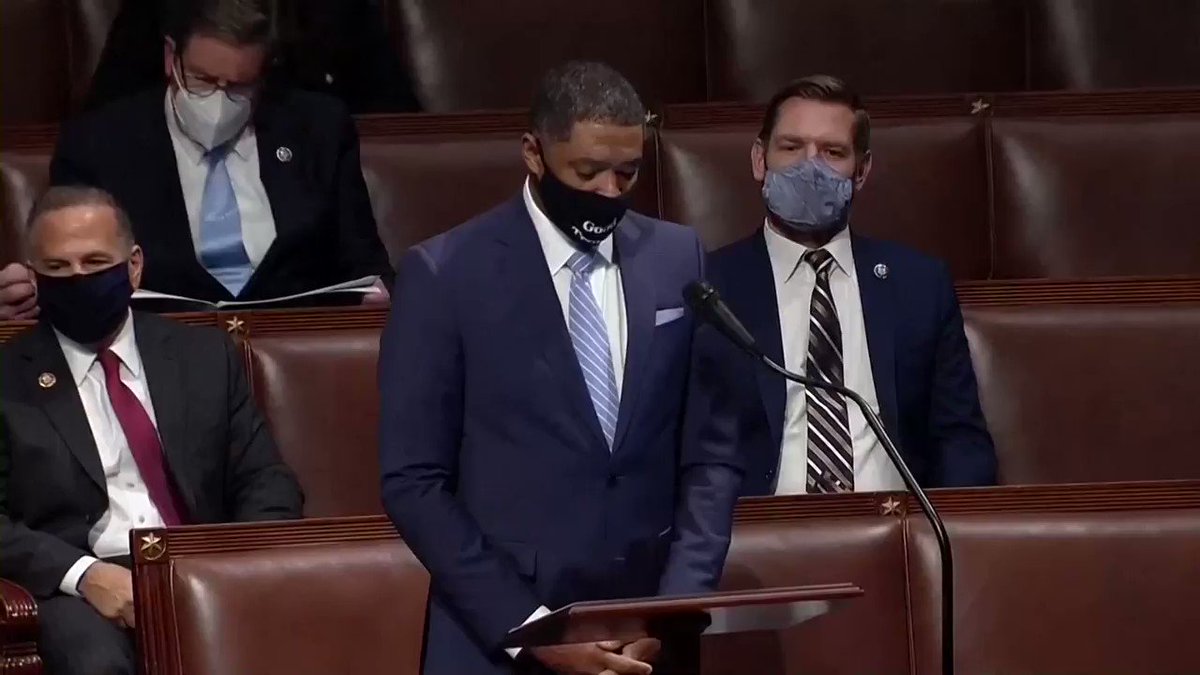 Amin
@amin_tweeter
“Simply put I told you so, Richmond out” 😭😭😭 Realest 1 on the floor ✌🏾 #ImpeachmentDay 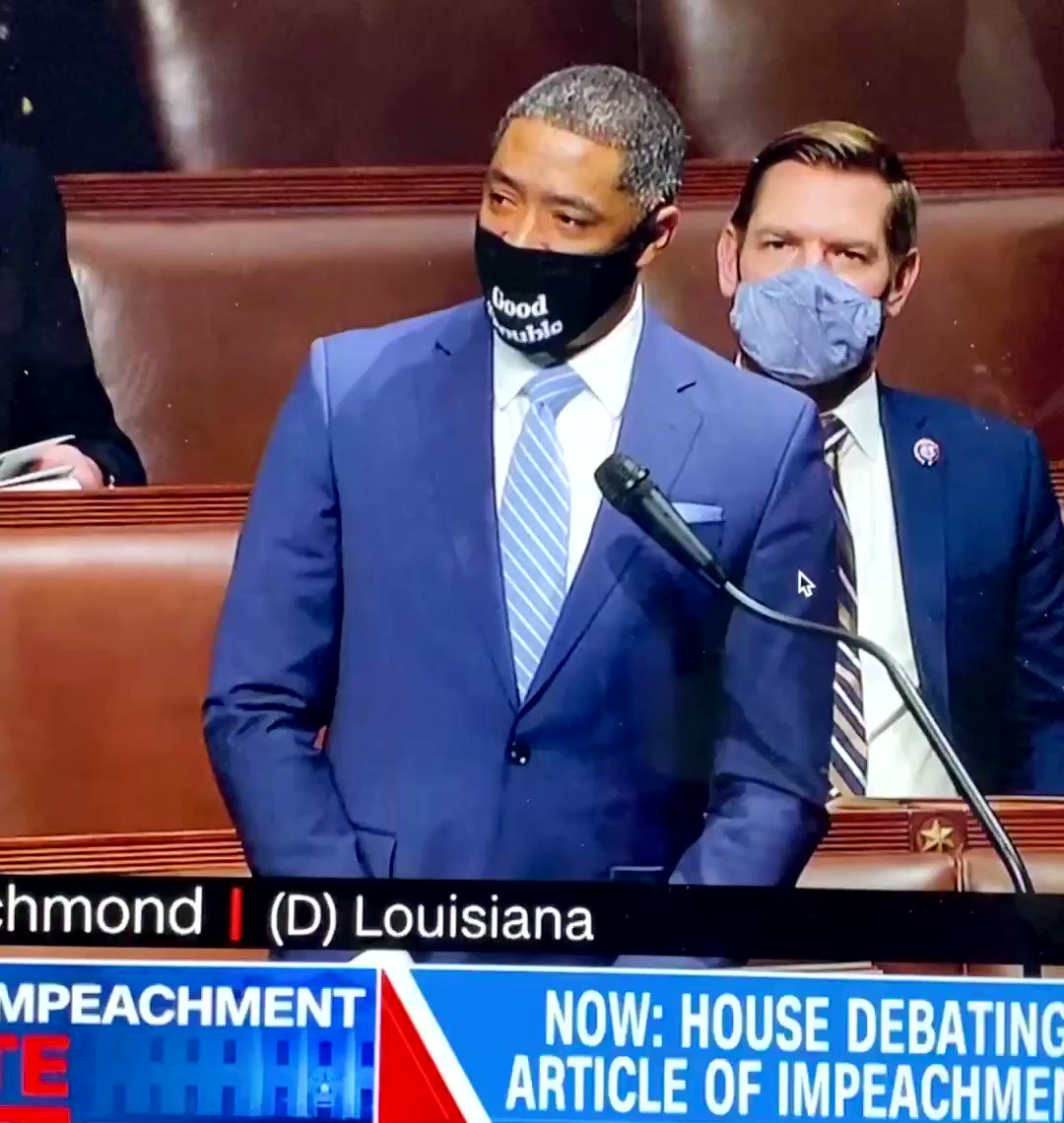 @ABC
"Simply put: we told you so. Richmond out." In what he called his last floor speech as a representative before joining the Biden administration, Rep. Cedric Richmond says Democrats had tried to warn Republicans about Pres. Trump. https://t.co/vdtbbFfqdP 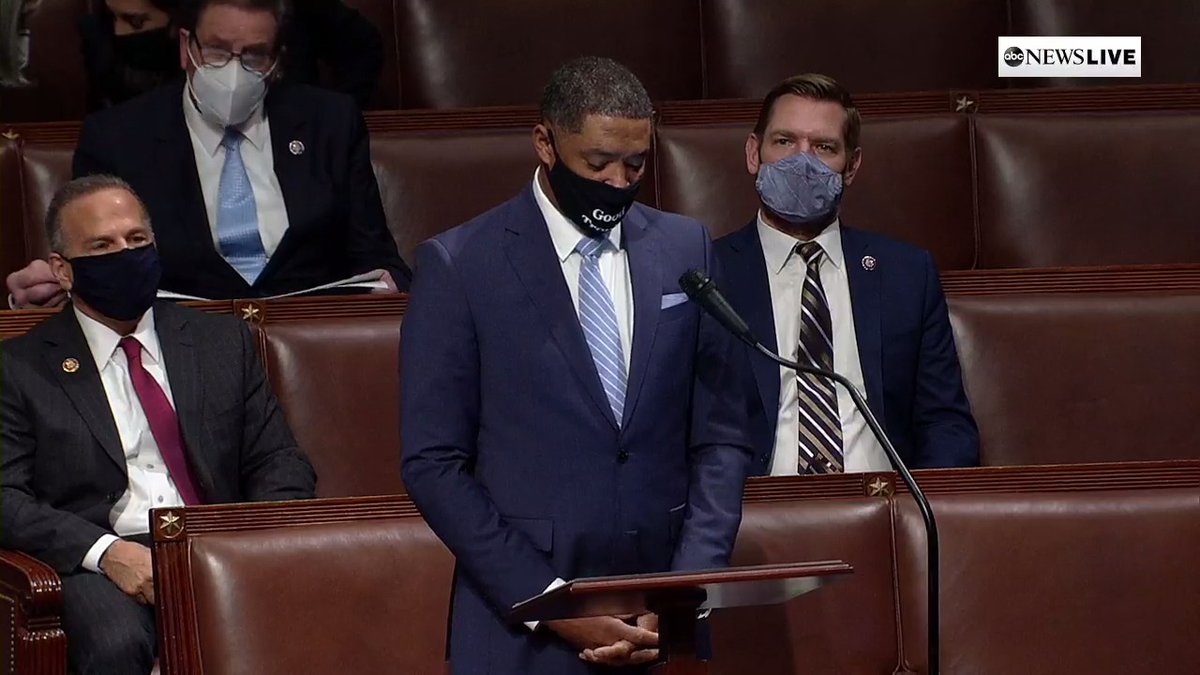 @CNN
Rep. Cedric Richmond, in likely his last floor speech before he leaves the House for the Biden administration, said that some of his fellow lawmakers "may well be co-conspirators" of President Trump in inciting the riot last week. https://t.co/JmNh2zMFZe
13 Jan, 06:55 PM UTC

@shannonrwatts
"...some of my colleagues, some of whom may well be co-conspirators," Rep. Cedric Richmond of Louisiana https://t.co/4oZYuAmiLS
13 Jan, 08:13 PM UTC

@EmmaKinery
Rep. Cedric Richmond (D): "President Trump put the domestic terrorists on notice by saying 'stand back and stand by.' He then summoned them to D.C., directed them to march on the Capitol, and then he sat back and watched the insurrection."
13 Jan, 06:03 PM UTC

@ABC
Rep. Cedric Richmond: "Stand up. Man up. Woman up. And defend this Constitution from all enemies, foreign and domestic—including Donald J. Trump." https://t.co/2b0fMIKeMB 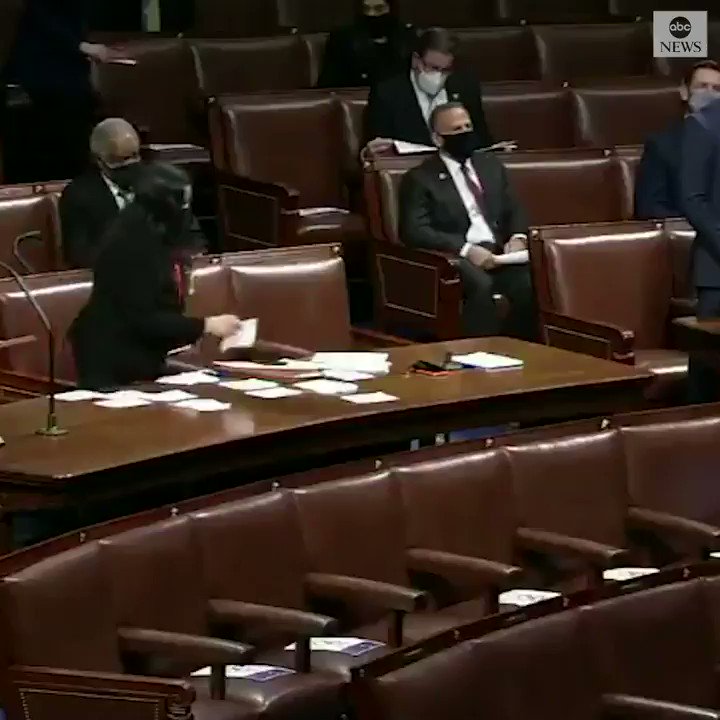 @therecount
Rep. Cedric Richmond (D-LA): “In the first impeachment, Republicans said we didn’t need to impeach [Trump] because he learned his lesson ... Well, we said if we didn’t remove him, he would do it again. Simply put, we told you so.” “Richmond out.” 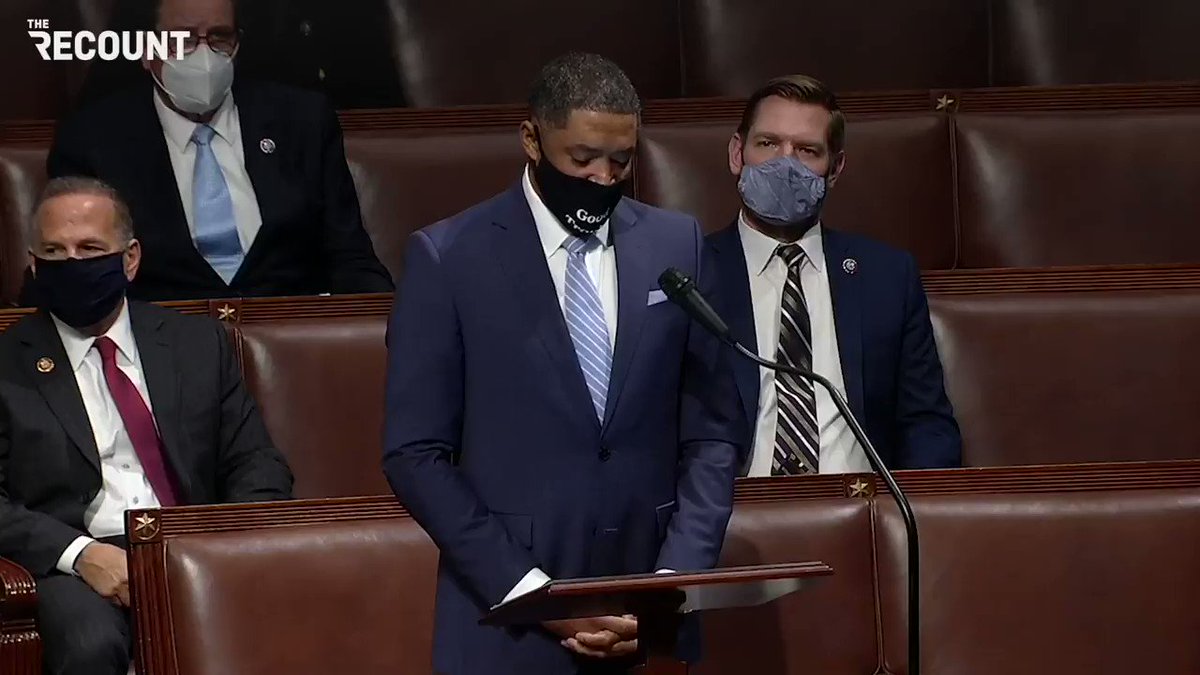 @PalmerReport
If you're wondering why this is Cedric Richmond's final House floor speech, he's taking a senior adviser position in the Biden White House. His speech today is a reminder of why Biden picked him.
13 Jan, 07:21 PM UTC

@therecount
@sarahnferris Rep. Richmond sums it up: "Simply put, we told you so. Richmond out."

United for the People
@people4kam
The last words of Cedric Richmond’s last floor speech: “Simply put, we told you so. Richmond out.”
13 Jan, 06:02 PM UTC

Historic Cricket Pictures
@PictureSporting
Cricket on Kew Green near Richmond in 1980. The ground remains picturesque, despite now being bordered by large roads and with the Heathrow flight path not far away, and has staged cricket for almost 300 years https://t.co/lzVaQInlIL
13 Jan, 08:13 PM UTC

Diana Rubino
@DianaLRubino
#BOOKQW word is RAGGED. From ONEY: Richmond whispered, “Miz Patty’s husband, he sold six of her slaves.” “Lawd Jesus.” A ragged breath escaped me. “If I become Miz Betsy’s property, her or her husband could sell me, too.” https://t.co/yFdVTgsH9Q #HistoricalFiction #Slavery https://t.co/PziIXHsGZp
13 Jan, 03:26 PM UTC

Allen K.
@AllenK_81
Ced Richmond suggested that him and one of his Republican colleagues engage in a round of fisticuffs, in defense of New Orleans, and I'll never forget that.
13 Jan, 08:52 PM UTC

@RTDNEWS
The off-duty police officers from the small town of Rocky Mount were in the U.S. Capitol on Jan. 6. Now they face federal charges. https://t.co/3z1yy7bWMm
13 Jan, 08:53 PM UTC

Diana Rubino
@DianaLRubino
#BOOKQW word is RAGGED. From ONEY: Richmond whispered, “Miz Patty’s husband, he sold six of her slaves.” “Lawd Jesus.” A ragged breath escaped me. “If I become Miz Betsy’s property, her or her husband could sell me, too.” https://t.co/yFdVTgsH9Q #HistoricalFiction #Slavery https://t.co/j3kvJP0V2I
13 Jan, 06:40 PM UTC

lizard🦎
@lxzuo
“I would never date a woman with an onlyfans” ok BUT you look like the wrinkly end of a Richmond sausage
13 Jan, 09:15 PM UTC

Jerome Connolly
@ConnollyStrat
@thehill Cedric Richmond is correct. Which means Senate Republicans who would not convict tRUMP share responsibility for the insurrection and damage to confidence in our elections.
13 Jan, 06:55 PM UTC

TMJ-KYL Cust. Srv.
@tmj_kyl_cstsrv
Career tip for landing jobs like "Retail Stocking Supervisor" in #Richmond, KY. Go on informational interviews. The best way to get a meeting with a hiring manager is to ask for an informational meeting. #supervisor
13 Jan, 09:16 PM UTC