@tribelaw
Three men — Presidents GHW Bush (Justice Thomas), GW Bush (Justices Alito, Roberts), Trump (Justices Gorsuch, Kavanaugh, Alito) — two of whom won with a minority of the popular vote — have done this to tens of millions of women and to the rule of law. This must be undone.
25 Jun, 02:28 AM UTC

@IsaacDovere
Confirmation hearing statements on Roe: Roberts: “settled as a precedent of the court” Gorsuch: “a good judge will consider it as precedent” Kavanaugh: “an important precedent” Barrett “so well settled that no political actors and no people seriously push for their overruling”
24 Jun, 03:43 PM UTC

@ElieNYC
Did everybody notice that Amy Coney Barrett didn't write anything on Dobbs? Arguably she's the deciding vote between Alito's full takedown and Roberts's more limited approach. Alito, Roberts, Thomas, and Kavanaugh all wrote something... but not a peep from Barrett.
25 Jun, 12:45 AM UTC

@TomFitton
Chief Justice Roberts missed a historic opportunity to do the right thing.
25 Jun, 12:47 AM UTC 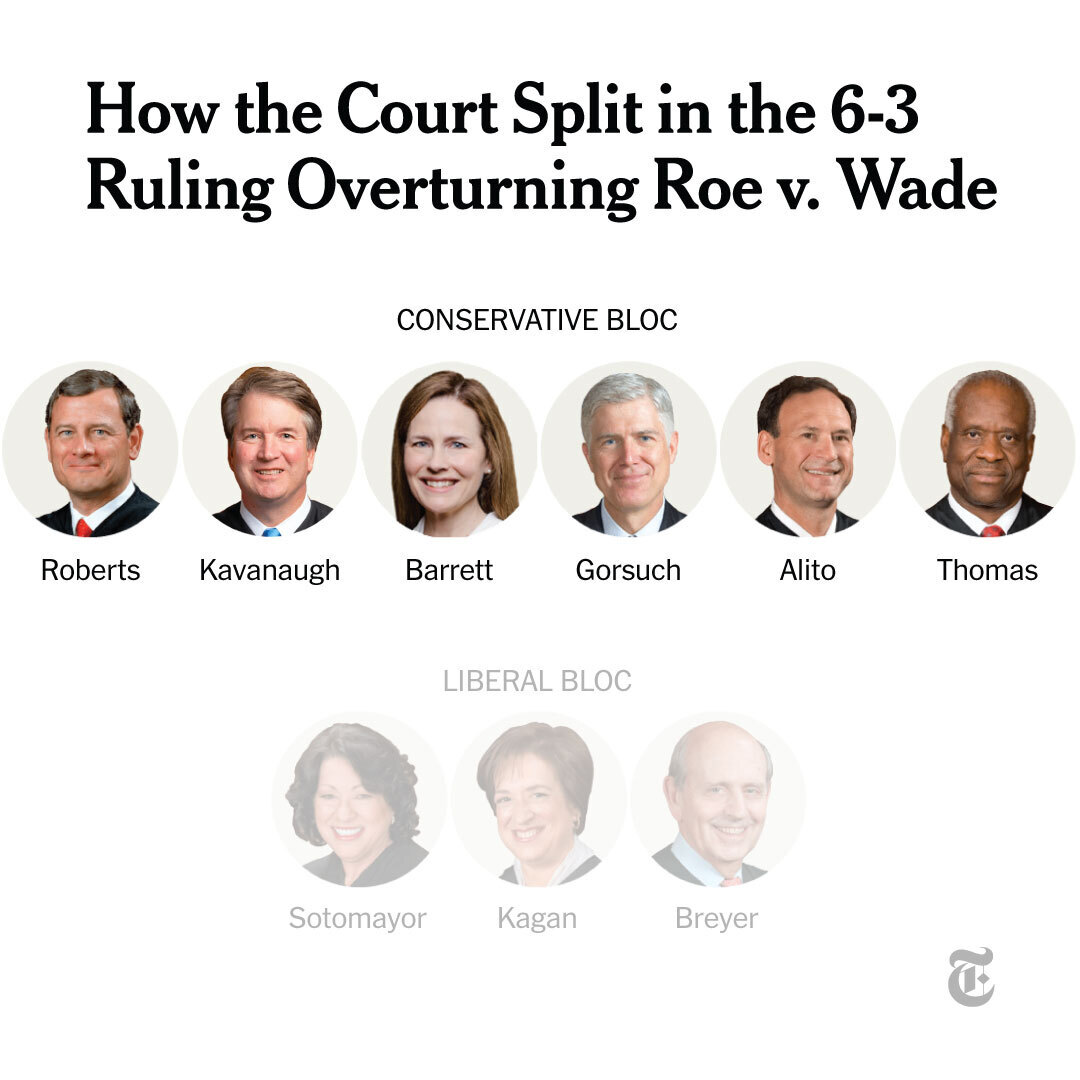 @BradleyWhitford
Roberts gutted the Voting Rights Act and opened the floodgates of dark money that has turned our civil discourse septic, undermined the legitimacy of the SCOTUS, and is accelerating the destruction of our planet. There is no Trump without Roberts. So no. He doesn’t get a pass. https://t.co/pCSmziEoGf
25 Jun, 06:30 AM UTC

Gary Armstrong
@vanityman
If I were Schumer, I'd call Roberts before the Senate Judiciary Committee. I'd then ask him the status of the Alito draft investigation, why he isn't investigating the Ginni Thomas claims of influence at the court, and how will he handle four justices perjuring themselves.
25 Jun, 01:37 AM UTC

Kaivan Shroff
@KaivanShroff
Enough with the Supreme Court public relations effort. If John Roberts wanted to stop Roe from being overturned he should have any of the 83 ethics complaints against Kavanaugh seriously. He didn’t.
24 Jun, 07:58 PM UTC

Jonathan Turley
@JonathanTurley
What is interesting is the isolation of Roberts on this case. Roberts wrote the ultimate incrementalist opinion but it was largely disconnected from the underlying constitutional interpretative merits that framed the majority and the dissenting opinions.
24 Jun, 03:10 PM UTC

@NPR
6. John Roberts (2005) During his confirmation hearing, Roberts said Roe was "settled as a precedent of the court." For the court to overturn a prior decision, Roberts said he thought it was not sufficient to believe the case had been wrongly decided. https://t.co/zun18jG1oq 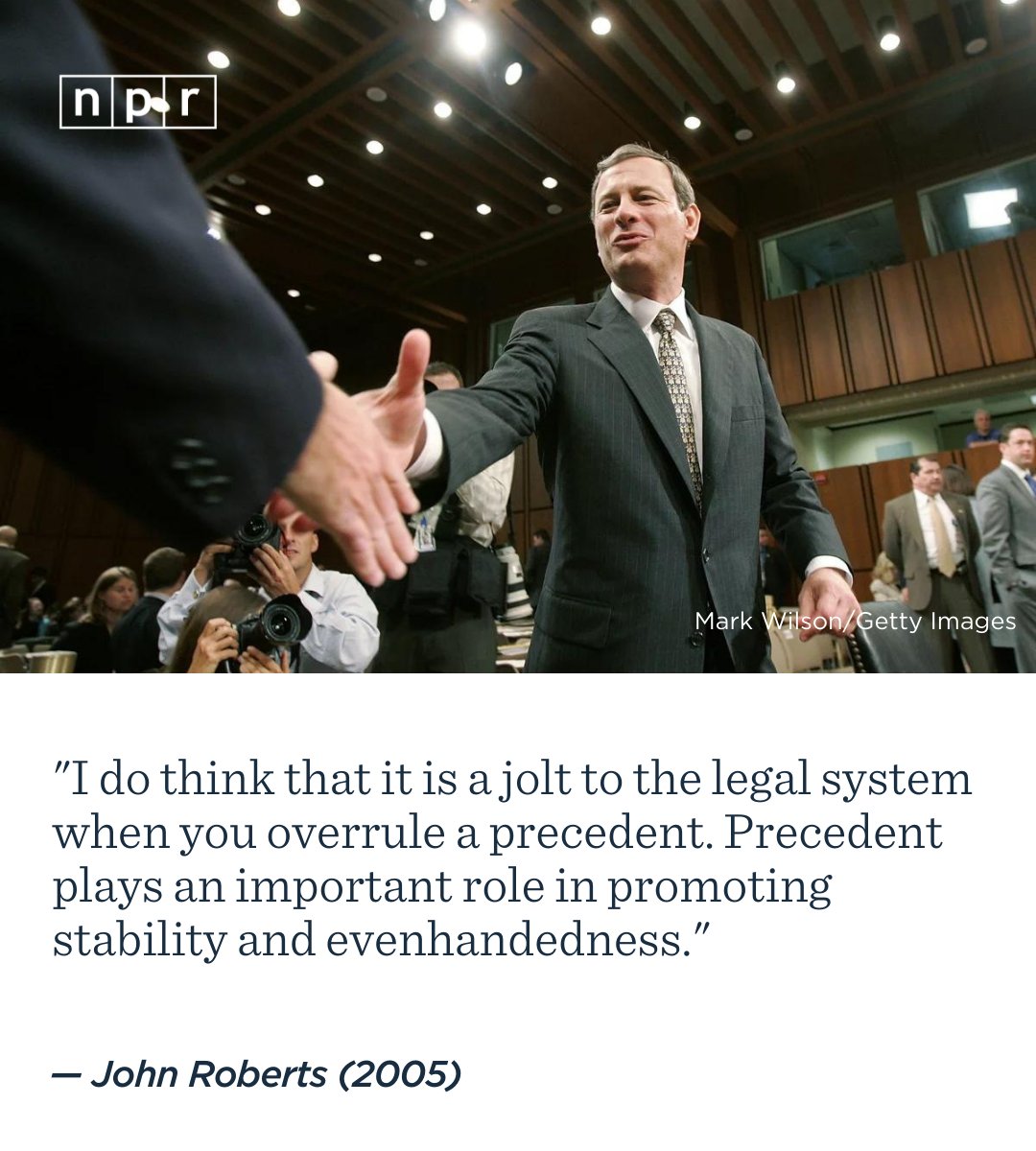 @HansMahncke
The best part is how weaselly John Roberts took great pains to distance himself from his colleagues but is getting destroyed anyway. https://t.co/mVnZyxSI4w
24 Jun, 09:31 PM UTC

@bennyjohnson
Good morning to everyone except "Christian" "Pro-Life" George W. Bush who is still SILENT on Roe being struck down, appointed a Liberal Democrat John Roberts as Chief Justice to sabotage conservative opinions and who never *once* spoke at the March For Life. What a Fraud.
25 Jun, 02:39 PM UTC

@ijbailey
@ijbailey
How can you write a piece like this, about Roberts’ supposed respect for precedent, and not mentioned that long before his right wing killed Roe yesterday that Roberts had already gutted the Voting Rights Act, which sped us down the road to this day? https://t.co/wZlIJndJ0J
25 Jun, 11:02 AM UTC

@mkady
If you're going to read one more story this morning on Roe, it's @joshgerstein on John Roberts and his coalition of none. https://t.co/XjD0PLUGV0
25 Jun, 12:47 PM UTC

Brad Beauregard Jr ☮️🇺🇸
@BradBeauregardJ
.@SenatorCollins said Kavanaugh told her that he agreed with Chief Justice Roberts, who said during his 2005 confirmation hearing that Roe was “settled as a precedent of the court.” It's not just Susan though...every cheating Republican Senator is responsible. #RoeVsWade https://t.co/yJ7bVvtGzq
24 Jun, 02:49 PM UTC

@BBCSportWales
Rhiannon Roberts telling the story behind THAT viral wedding video 😂 The Wales international claimed that it was 'very difficult in the dress'... nevertheless she finished her chance in style ⚽️
25 Jun, 09:15 AM UTC

Fabiola Carrion
@FabCarrion
Perhaps an unpopular opinion, but glad that Roberts didn’t dissent and showed his true colors. We can’t rely on the so called compromisers. Our rights are non-negotiable.
24 Jun, 03:42 PM UTC

Prosecute Trump: Ebola sabotage 2018
@TuffsNotEnuff
@Numbers28 After #TheFiveKings overturned Roe v. Wade, I didn't see one Libertarian point out the authoritarian excess of this action. Even Roberts in his pro-15-week opinion, failed to mention authoritarian excess. Hypocrisy ??? What else ?
25 Jun, 02:35 PM UTC

Justin CA30
@Justin_CA30
The #RobertsCourt has made it clear for years that it is an illegitimate political body, with no regard for legal precedent, people's rights, public sentiment, or intellectual honesty. Roberts has presided over the death of the court. #DontTrustTheCourt #SCOTUSIsIllegitimate
25 Jun, 02:37 PM UTC