@elonmusk
@LindseyGrahamSC Assuming you believe that the will of the people matters, we should, in any given conflict region, support the will of those who live there. Most of Ukraine unequivocally wants to be part of Ukraine, but some eastern portions have Russian majorities and prefer Russia.
06 Oct, 01:47 AM UTC

Chuck Pfarrer | Indications & Warnings |
@ChuckPfarrer
BURN RATE: Russia has become the largest weapons supplier to Ukraine. 320 tanks have been transfered to UKR by the west-- an additional 421 were abandoned by RU and placed into UKR service. IFVs, 210 from the west, 445 from RU, armored vehicles, 40 from the west, and 192 from RU. https://t.co/4gpw3iJs7r
05 Oct, 04:37 PM UTC

@diazbriseno
ZELENSKY: “On whose side would Simón Bolivar be in such a war that Russia unleashed on Ukraine. Who would José de San Martín support? Who would Miguel Hidalgo sympathize with?” 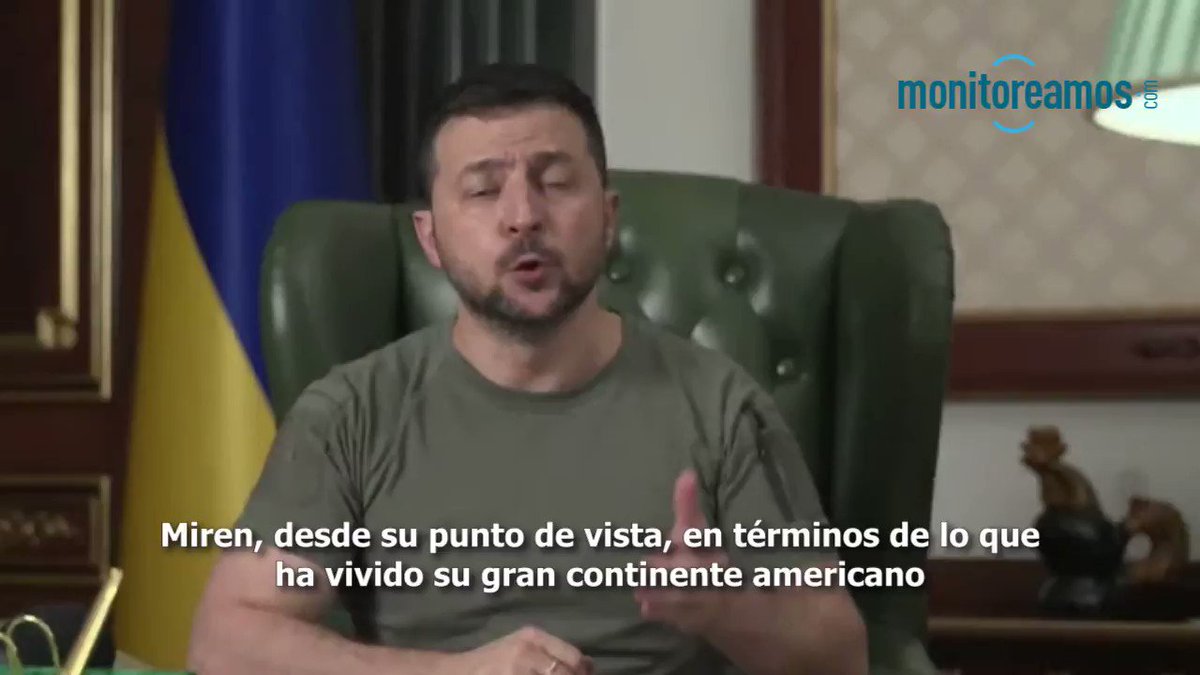 @aaronjmate
On US claims that Russia was behind the bombing of the Nord Stream pipelines, despite a years-long US effort to kill the pipeline and multiple US officials vowing to stop it no matter what: 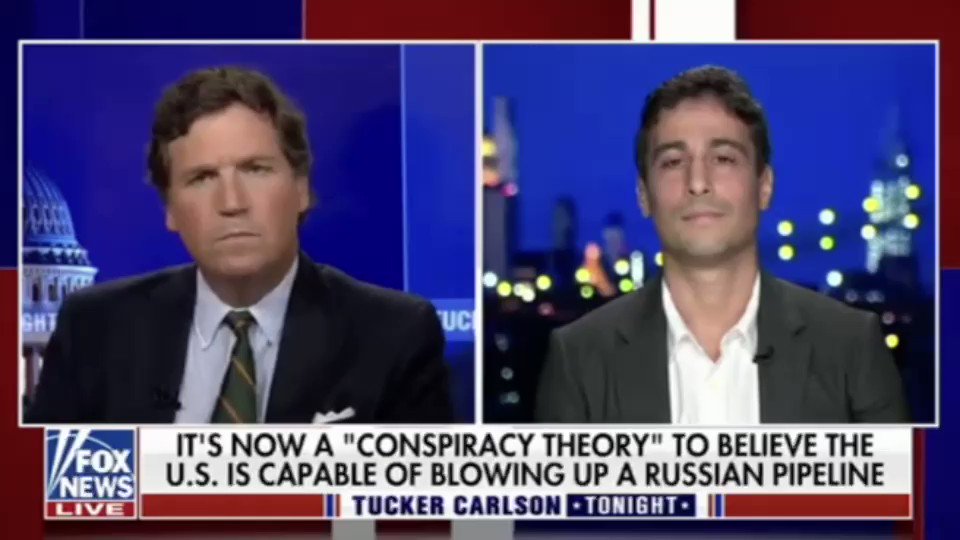 Igor Kyivskyi
@Igor_from_Kyiv_
Let me remind you that after the announcement of mobilization in Russia. Our telephone line received more than 2,000 bells from Russians, with questions about how to surrender
05 Oct, 05:07 PM UTC

@LindseyGrahamSC
Suggesting we end the Russian invasion by simply giving Russia parts of Ukraine - after all the suffering - is dumb. It is also an affront to the bravery of the Ukrainians fighting to defend their homeland.
05 Oct, 05:42 PM UTC

@richimedhurst
Global power shifting away from the US and EU, towards BRICS and OPEC: In response to the G7’s idea to price-cap Russian oil, OPEC said it will cut oil production by 2million bpd, raising global prices + revenue for oil giants like Russia. Even the Saudis seem sick of the West.
06 Oct, 12:02 AM UTC

Igor Sushko
@igorsushko
#Mobilization: COVID-19 outbreak on a train filled with conscripts in #Russia in the Tamansk division, which is right next to #Crimea. They've now been locked up on the same train for a 2-week "quarantine" with no ventilation or medical help. Many are old and unhealthy. https://t.co/ANETq773BP
05 Oct, 06:14 PM UTC

Sofi Oksanen
@SofiOksanen
In #Kyiv people are buying rubber gloves and raincoats to protect themselves from possible radiation and in many regions they have distributed iodine pills to the citizens. This reminded me of different realities: (1/x) 🧵 #Russia
05 Oct, 09:24 AM UTC

oseni rufai
@ruffydfire
For those making the funny comparison between Nigeria and the UK economy suffering the same problem because of the war.I am sure they forget that Nigeria has gas reserves but it had not invested in them and we don’t pay Russia 4.2billion for gas or import from Norway.
05 Oct, 10:16 PM UTC

@KyivIndependent
The Institute for the Study of War said in its latest report that while Russia's military mobilization continues to face challenges and public outcry, Vladimir Putin will try to set Defense Minister Sergei Shoigu as a scapegoat while boosting support with other military factions.
06 Oct, 05:13 AM UTC

@Matt_VanDyke
1. Russia tried to assassinate Zelensky numerous times 2. Both Dugin and Dugina were Russian insiders and propagandists with blood on their hands 3. Ukraine has lost so many daughters, all of whom were far better than Darya Dugina #StandWithUkraine #Ukraine #NAFO
05 Oct, 09:20 PM UTC

@EPPGroup
Our MEP @sikorskiradek has a clear message for Vladimir Putin: You can no longer win. But you still have some room for manoeuvre. A previous ruler of Russia, Nicolas II, also lost, but he concluded peace. The choice is yours. Watch⤵️ #StandWithUkraine 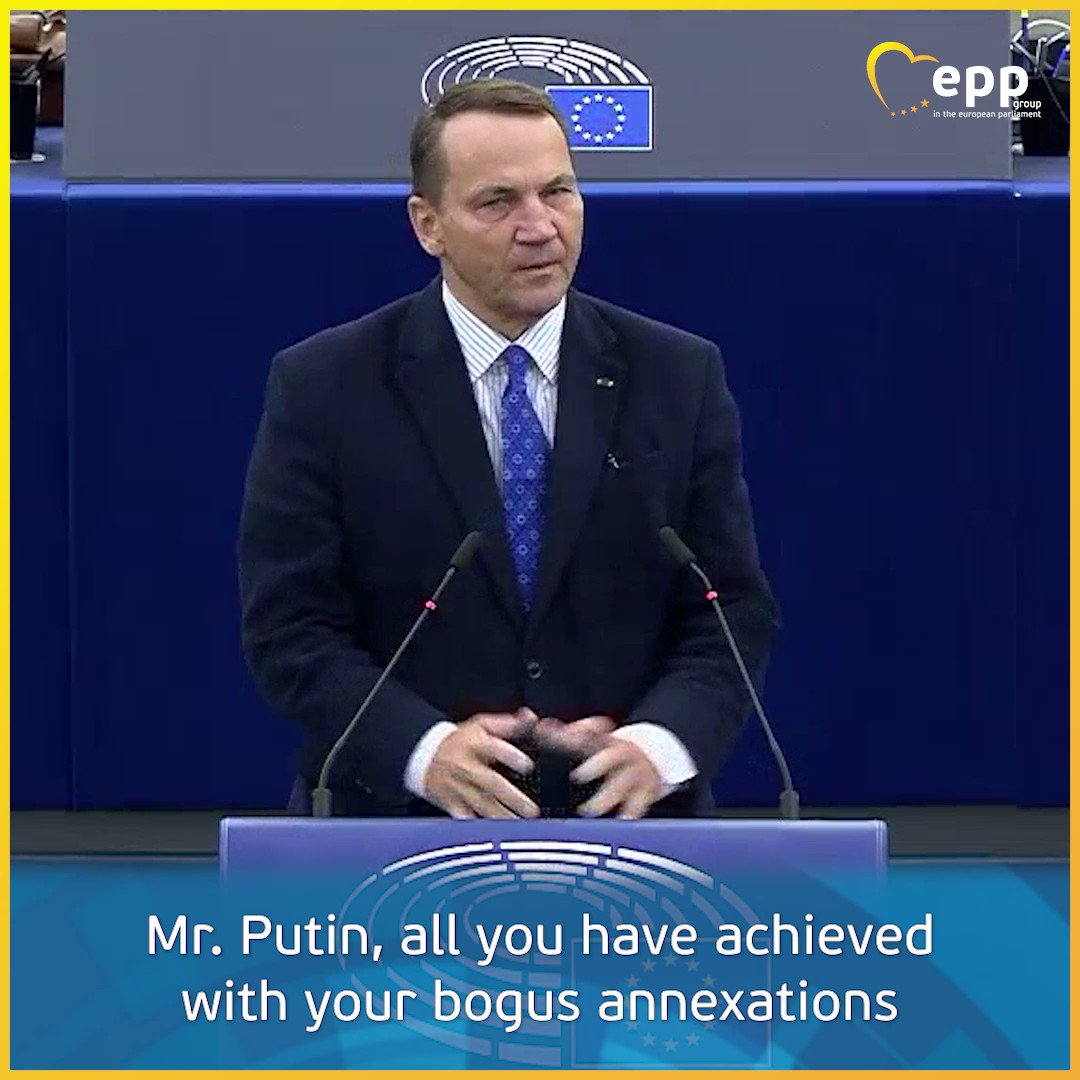 @StateDept
Taira, a Ukrainian combat medic, has seen firsthand people dying in captivity because of insufficient medical care or torture. She calls for the global community to hold Russia accountable and provide the care everyone deserves. #UnitedWithUkraine 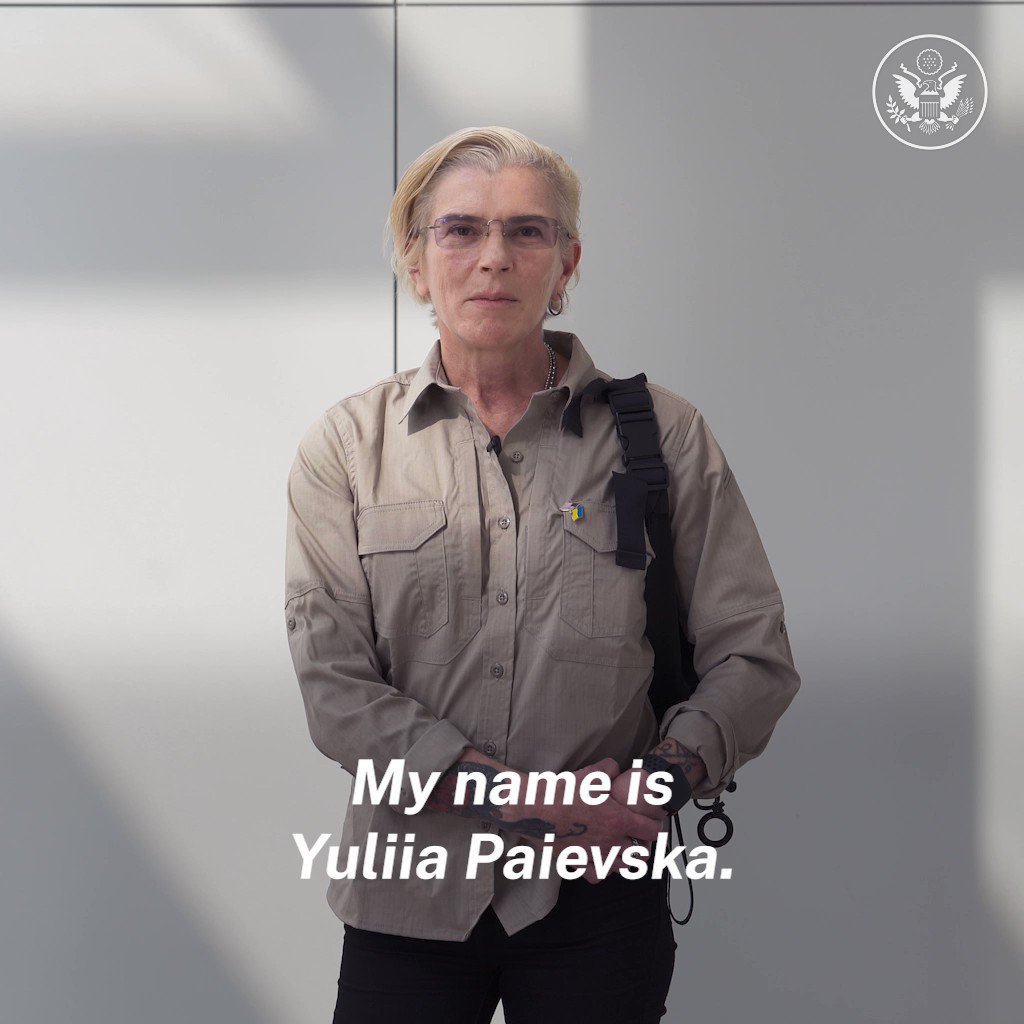 Cormac Smith 🇮🇪🇬🇧🇺🇦🇪🇺🏳️‍🌈
@CormacS63
“Russia sent slaves to liberate freemen” On @TalkTV today with @iancollinsuk I was asked why Ukraine was doing so well. 3 things: Western support was critical to keep them in the game Ukrainians are better trained, including by the Brits But biggest difference moral & bravery https://t.co/LMDZUMR4Jv
05 Oct, 04:45 PM UTC

@PrimeministerGR
Looking forward to the discussions at EUCO to design a cap that secures supply, keeps prices reasonable and maintains the internal market. The time has come to drastically support our citizens against the weaponization of energy by Russia.
05 Oct, 04:21 PM UTC

@BBCSteveR
Interesting how freely studio guests/anchors on Russian TV use the word ‘war’ now to describe events in Ukraine. Anchor Vladimir Solovyov last night: “It’s a Fatherland War. A war on our territory.” No mention, of course, that it was Russia that started this by invading Ukraine.
06 Oct, 05:54 AM UTC

@olliecarroll
Since then Russia has invaded Ukraine, then invaded again, killed hundreds of thousands, declared a nationcide, and threatened nuclear war. Yet Elon Musk somehow thinks none of the blue guys have changed their minds. https://t.co/Avvpgx0QMn
06 Oct, 05:53 AM UTC

Lera
@nowherelera
“Protesting is dangerous in russia” Guess what’s dangerous in Ukraine? Sleeping in your own fucking bed at night. Downtown Zaporizhzhia. https://t.co/PJTDDjp9q7
06 Oct, 05:03 AM UTC

@KyivIndependent
These are the indicative estimates of Russia’s combat losses as of Oct. 6, according to the Armed Forces of Ukraine. 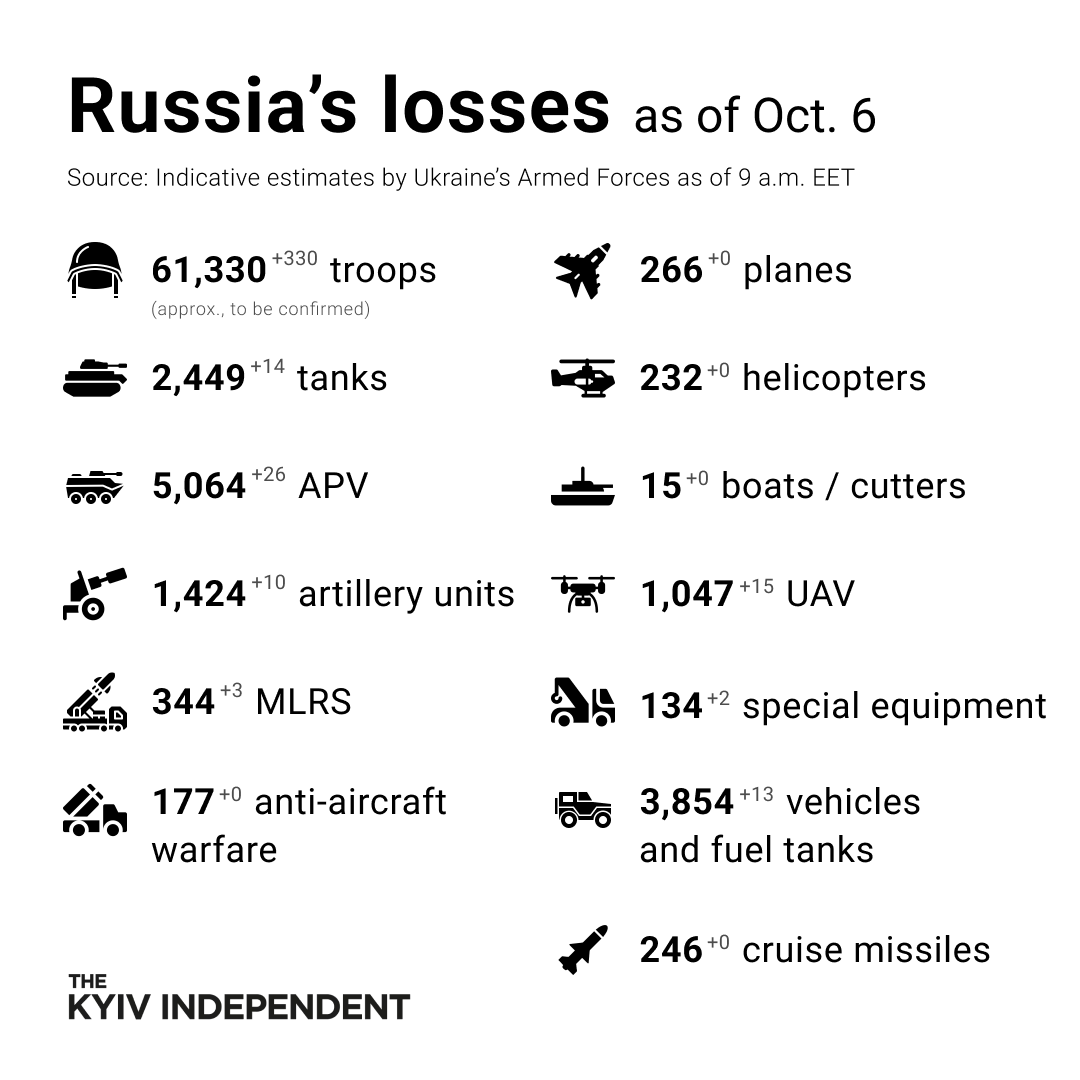 Black in the Empire
@blackintheempir
NAFO you're lying or ignorance is going to lose, and it's not because people love Russia or hate Ukraine, it's because too many people in the world know the truth, the lies being told them are becoming too ridiculous or their own self interests are becoming too important to them.
06 Oct, 02:10 AM UTC

Churchill 🇬🇧🇺🇸🇺🇦
@WarAgainstPutin
Terrorist Russia and war criminal Putin must be destroyed for their crimes against humanity. https://t.co/7O6yOPMNoi
06 Oct, 04:44 AM UTC

Olesia
@olesya_on
@elonmusk @LindseyGrahamSC Elon, why not use these pictures from Mariupol, Kherson, Melitopol (all currently occupied by Russia). This is not 2012, this is 2022. People went to streets by thousands, sometimes despite Ru soldiers threatening to kill them to show they want to live in Ukraine. https://t.co/LDNrvzgjWN
06 Oct, 06:11 AM UTC