Rutgers is trending on Twitter. Popular tweets on Rutgers.

Brad Wachtel
@Brad_Wachtel
This could change tomorrow, but as of today, these are the only teams in college basketball that do not have a Q2/Q3/Q4 loss. Gonzaga Baylor Michigan Illinois West Virginia Kansas Texas Rutgers Clemson
24 Feb, 01:49 PM UTC

@JonRothstein
Rutgers will hear its name called on Selection Sunday for the first time since 1991. Three decades of waiting is OVER. https://t.co/1YcXoeOErP
25 Feb, 03:07 AM UTC

Brad Wachtel
@Brad_Wachtel
What does Rutgers win over Indiana mean for the Scarlet Knights? It means, AT MINIMUM, they will be able to tune in on Selection Sunday and have a decent chance to hear their name called for the first time since 1991. One more win? 🔒
25 Feb, 03:03 AM UTC

RutgersSportsTalk
@RutgersFBTalk
Thank you @Geo_Baker_1 for changing this program! #Rutgers Nation, get this tweet trending. One of the all-time Rutgers greats #GardenStatement https://t.co/OMFvOd4lmj
25 Feb, 02:59 AM UTC

@StevePoliti
Nice touch that BTN is showing the senior night ceremonies at Rutgers. This is a great group. Fans should be proud to have had them wear the uniform.
25 Feb, 01:00 AM UTC

Jerry Carino
@NJHoopsHaven
Rutgers now will have beaten Indiana in 5 of the past 6 meetings, proving how little the stars next to a recruit's name really mean. Steve Pikiell has taken Archie Miller to the woodshed -- again.
25 Feb, 02:57 AM UTC

Alex Broggi
@AlexBroggi
Rutgers team having a little fun in the locker room after a big win (courtesy of JY’s insta) https://t.co/3C20MvNM1w
25 Feb, 03:16 AM UTC

TJ (RUTGERS BASKETBALL)
@TJHitchings
RUTGERS COMES BACK FROM THE DEPTHS OF HELL TO STOMP INDIANA INTO THE GROUND. GEO BAKER LOOKS LIKE GEO BAKER AGAIN. RON HARPER DRAINING 3S AGAIN. WE ALMOST ACTUALLY DIED BUT NOW WE ARE SO DAMN BACK. DO NOT LET US GET HOT RIGHT NOW. I LOVE THIS TEAM. @RutgersMBB @BarstoolRU https://t.co/FIqpycDN9S
25 Feb, 03:04 AM UTC 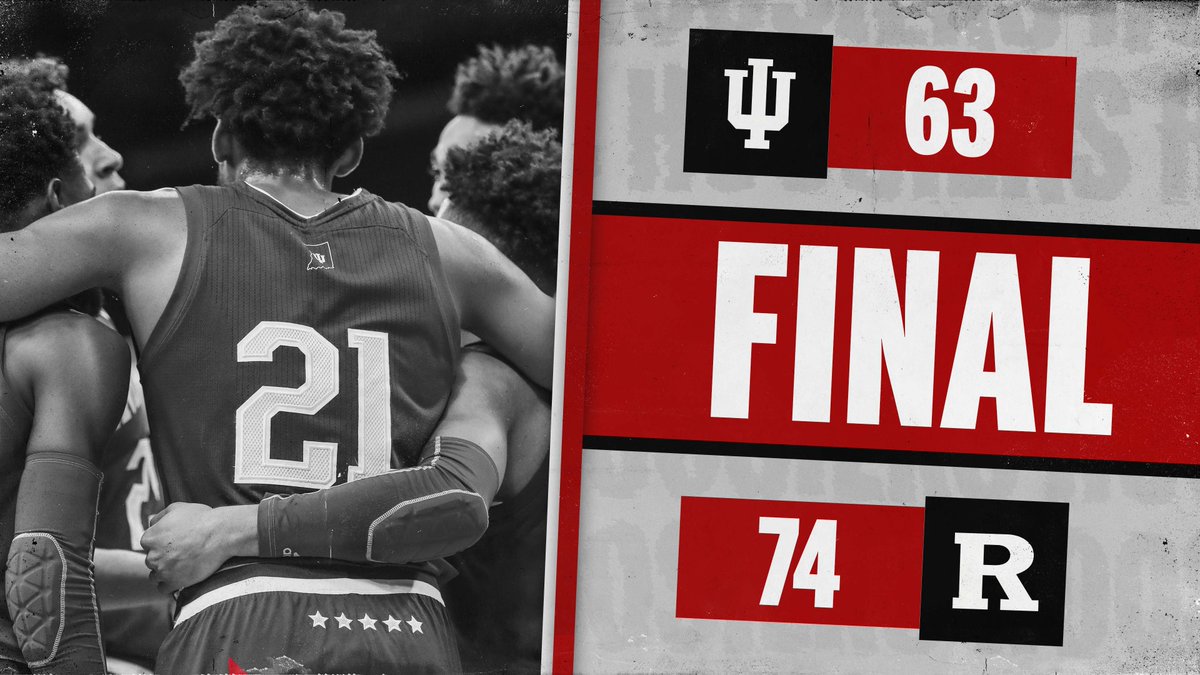 @jeffborzello
So ... Indiana. Hoosiers will drop to 12-11 overall/7-9 in Big Ten after this drubbing at Rutgers. And their final three games? vs. Michigan, at Michigan State, at Purdue. I'd imagine they'd have to go 2-1 in the final three, then win a couple games in the Big Ten tournament.
25 Feb, 03:00 AM UTC

Erik Haslam
@haslametrics
Ron Harper's dunk at the 3:45 mark puts Rutgers-Indiana into #AnalyticallyFinal territory with the Scarlet Knights up 70-50. Excellent win for Rutgers, one that will bolster their résumé. Indiana starting to really slip down the bubble.
25 Feb, 02:57 AM UTC

@DustinDopirak
Rutgers 74, Indiana 63. I'm not sure which loss is more brutal for Indiana between this one and Saturdays. But for IU to get in it probably has to either A) Beat Michigan at home. B) Beat Michigan State and Purdue on the road. Hard to fathom either of those things happening.
25 Feb, 03:05 AM UTC

Rutgers Scarlet Knights | TheKnightReport.Net
@RutgersRivals
#Rutgers 🏀 HC Steve Pikiell victory over #Indiana: “We never flinched, we were down 15 points and we kept playing. I love that part, how we were all connected." Full presser in link below ⤵️⤵️⤵️ https://t.co/cFmYdUeMZc
25 Feb, 03:44 AM UTC

Aaron Breitman
@aaron_breitman
Indiana was 8 of 18 from three but in large part because they were just 14 of 43 from two-point range (32.6%), Rutgers held Hoosiers to the second lowest offensive efficiency of the season. Myles Johnson had 7 blocks while team had 10 total and 9 steals.
25 Feb, 04:02 AM UTC

@RobDauster
I'm not sure I've ever seen a 15-point lead evaporate as quickly as Indiana's 15-point lead at Rutgers just evaporated. They're playing so bad that Ron Harper Jr., who entered tonight 1-for-28 from three since the last Indiana game, has two threes already.
25 Feb, 01:51 AM UTC

Mike Schumann @ The Daily Hoosier
@daily_hoosier
As a team IU made just 14 of 43 (32.5 percent) from 2-point range. They managed to shoot worse from 2 than their 35 percent performance in the first meeting against Rutgers. #iubb
25 Feb, 03:52 AM UTC

Jeff Rabjohns
@JeffRabjohns
Recap: Indiana gives up a 15-point lead, falls 74-63 on the road to Rutgers, which completes the season sweep of IU. #iubb From @Jared_Kelly7 https://t.co/LqpqaOaCXd
25 Feb, 03:12 AM UTC

IndianaHQ
@IndianaHQ
Archie Miller is here. "Credit to Rutgers. Thought they really, really responded well to our start. We weren't ready after halftime. It started with our defense." #iubb
25 Feb, 03:28 AM UTC