@GadSaad
Sam Harris could have regained my esteem and that of many of his compatriots by exhibiting intellectual humility; by engaging those who challenged his positions. In several acts of childish insolence, he broke friendships, doubled down, and exhibited astounding pomposity.
24 Nov, 09:34 PM UTC

Konstantin Kisin
@KonstantinKisin
When we interviewed Sam Harris I disagreed very strongly with what he said about the Hunter Biden laptop. That's why we pushed back even though I actually wanted to move on. I found the way he saw Trump & COVID difficult to comprehend. But I am sorry that Sam left Twitter...
24 Nov, 10:16 PM UTC

Maarek
@Maarblek
people like Sam Harris and Claire Lehmann are quitting Twitter because they know they are going to be humiliated daily now that there won't be moderators sheltering them like hothouse flowers cultivated in the role of 'opposition'
25 Nov, 04:13 AM UTC

Evan
@EvanPlatinum
Musk got Sam Harris and Claire Lehman to deactivate in disgust. Not sure if that's worth $44 billion but its up there
25 Nov, 02:03 AM UTC

@douglasernst
One can reasonably conclude by his past comments that Sam Harris gets more upset by Donald Trump having access to Twitter than recent news about Balenciaga. Yikes! https://t.co/1HnT8oC6CH 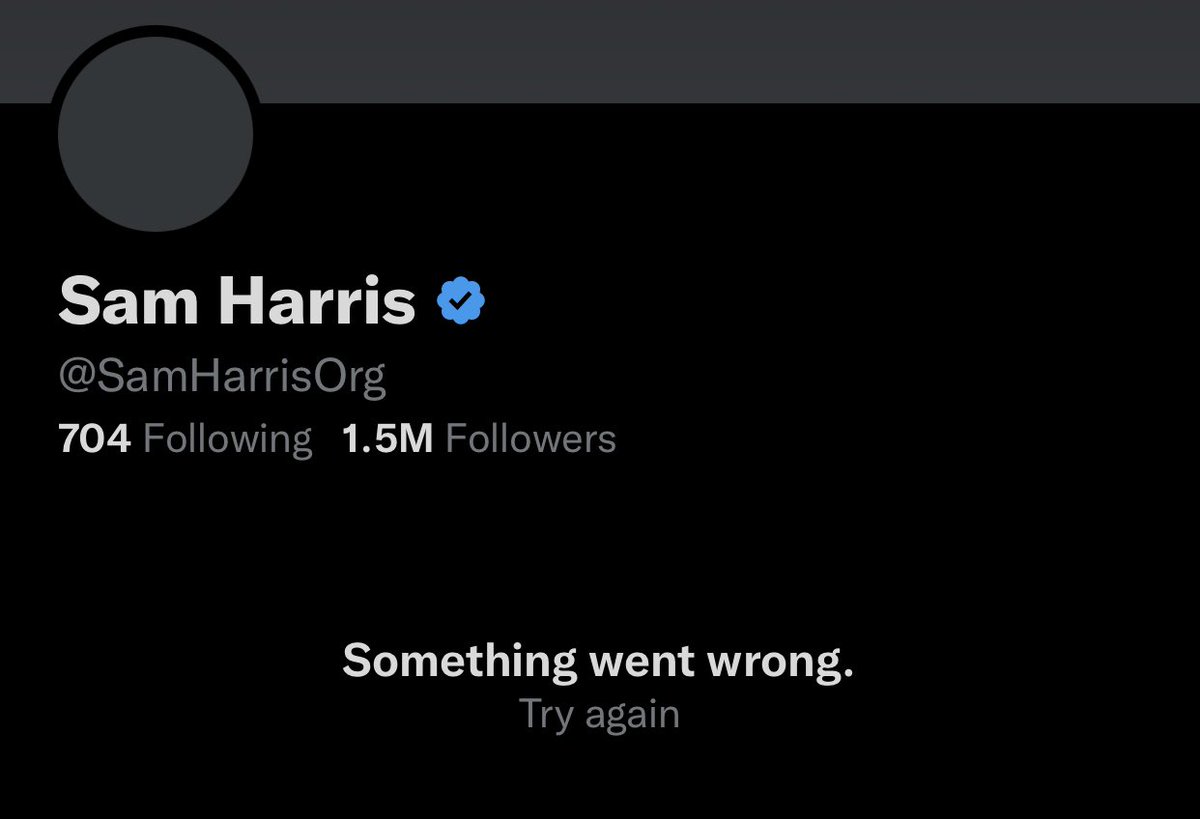 @PrisonPlanet
Sam Harris has deleted his Twitter account, just days after he claimed the New York Post report on the Hunter Biden laptop was correct “by accident,” a comment that renewed scrutiny of Harris’ previous comments that he supported censorship of the story. https://t.co/5QbLGlYo5x
25 Nov, 02:00 PM UTC

Alexandros Marinos
@alexandrosM
What happened to Sam?🧵 "All we have between us and the total breakdown of civilisation is a series of successful conversations. If we can't reason with one other, there is no path forward other than violence. Conversation or violence." - Sam Harris https://t.co/lHYgXSs2Fl https://t.co/iNzA74NIjh
24 Nov, 10:12 PM UTC

@mattyglesias
Am I gathering that rightists harassed Sam Harris off Twitter? I think if Musk unleashed more and more right-wing trolls the macro-political impact will be to push more moderate-minded people to the left as they're exposed to more and more craziness.
25 Nov, 12:11 PM UTC

Seerut K. Chawla
@seerutkchawla
There’s no one I agree with 100%. That doesn’t mean I can’t find great value in their thinking, and respect them as a human being. That includes Sam Harris.
25 Nov, 02:16 AM UTC

Tweety Bird
@busybirdie10
@JackPosobiec Guilty by association? 🤔 “Hunter Biden could have literally had the corpses of children in his basement. I would not have cared.” -Sam Harris
24 Nov, 10:21 PM UTC

@AndrewYang
Being on Sam Harris’s podcast @MakingSenseHQ was one of the things that put my presidential campaign on the map and helped lead to the #yanggang. Will always be grateful to Sam. And I run into fans of his literally all of the time.
25 Nov, 03:30 PM UTC

@Ravarora1
I strongly disagree with Sam Harris on multiple issues (censorship, vaccines) but that doesn't legitimize personal attacks against him. Substantive critiques aside, there was a lot of smearing. Like @KonstantinKisin, Sam has greatly influenced me and he will be missed here.
25 Nov, 07:17 AM UTC

LeftOfTheDial
@EricShapiro3
Sam Harris should have stuck to writing about atheism, minus the Islamophobia. MAGA is proud of driving a “leftist” off Twitter, but being anti-Trump does NOT mean Harris (a proponent of Charles Murray’s “race science”) is left.
25 Nov, 03:12 PM UTC

Christina Buttons
@buttonslives
This Sam Harris clip has been so helpful in reminding me over the years to live in the present moment instead of constantly looking over its shoulder. I watch it often. The speech is called "Death and the Present Moment" and it was one of his best!💜https://t.co/r9Fq8TUf4V https://t.co/c4f3CRGQe7
25 Nov, 04:04 PM UTC

Free Market Humanitarian
@FreeMarketLife
@EthicalSkeptic Sam Harris has always been a zealot. His staunch Atheism revealed him to be prone to brainwashing. He isn't skeptical in his atheism; he is faithful.
25 Nov, 04:05 PM UTC

Rode wet. Put away broke.
@PilumPress
@alexandrosM Has anyone seen Claire Lehmann and Sam Harris in the same place, together?
25 Nov, 04:09 PM UTC

Ian
@IanAdAstra
@IonaItalia Since the likes of Claire Lehmann & Sam Harris were on Twittter largely to publicize their own platforms, their departure may indicate its diminishing value. Or they view its recent policy changes as conferring undesirable reputational risk to high profile participants.
25 Nov, 04:09 PM UTC

RideTheLightning⚡
@MediumSqueeze
Sam Harris self deleted, likely due to the return of orange man. Goes to show, none of us are infallible to mental issues. Not even the great mediator. https://t.co/RCDbSD118x
25 Nov, 04:07 PM UTC

Iron Giant
@neonationstate
@adamscrabble If it wasn't for the Golden Girls we would have never known who Sam Harris was. Besides I always preferred Ham Sarris. https://t.co/TG22SfoMH9
25 Nov, 04:16 PM UTC