Secretary of State is trending

@DanRather
The audio of Trump with the Georgia secretary of state. Wow. It’s like telling the Nixon tapes to “hold my beer.”
03 Jan, 08:46 PM UTC 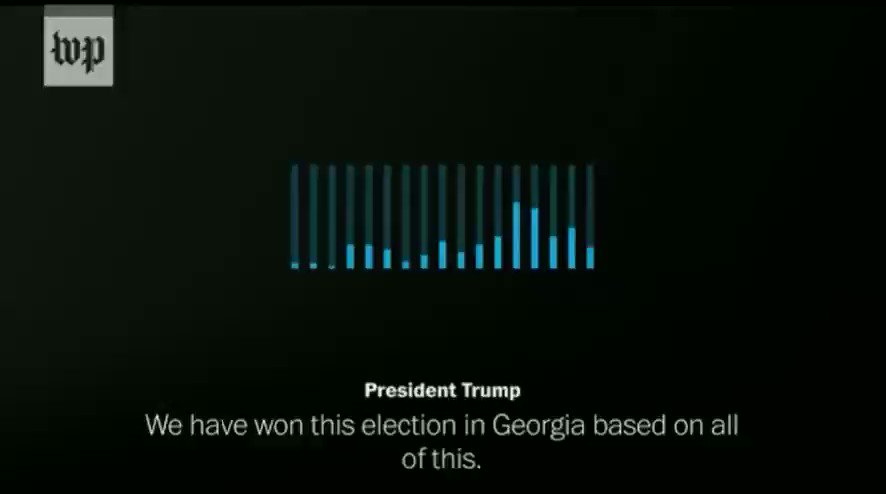 @mattmfm
Every network should be breaking into coverage right now with a Special Report to share with viewers Donald Trump, on tape, threatening a Secretary of State to manufacture votes to steal an election. The most damning tape since Watergate.
03 Jan, 06:25 PM UTC

@jaketapper
The full call is here and while I have your attention pay your child support https://t.co/fo2JPaxUEs https://t.co/PPOyuu4fkJ
03 Jan, 09:28 PM UTC

@RadioFreeTom
The President of the United States is threatening the Georgia Secretary of State in order to flip an election and reverse the votes of the citizens of Georgia. This is an impeachable offense and for anyone enabling it, a criminal conspiracy.
03 Jan, 06:57 PM UTC

The Lincoln Project
@ProjectLincoln
JUST RELEASED the full 60-minute audio of the #TrumpTapes or as Abe likes to call it, Exhibit A of Individual 1 in his own words. https://t.co/52sRzftOJF
03 Jan, 09:29 PM UTC

@DavidShafer
Mind boggling that @GaSecofState and his lawyers would secretly record and release a confidential settlement conference with the President. I have made open records requests to the Secretary of State which have never been acknowledged or answered. This is lawlessness.
03 Jan, 10:23 PM UTC

@BeschlossDC
What’s next? Horse’s head into the bed of the Georgia Secretary of State?
03 Jan, 07:45 PM UTC

@glennkirschner2
The Trump tapes sound like a mob boss giving orders to a lieutenant. Trump tells the Georgia Secretary of State to “find” the exact number of votes he needs to flip the results. This sounds exactly like what we would catch our RICO defendants saying when we were up on a wire.
03 Jan, 08:14 PM UTC

Republicans for Joe Biden 🇺🇸
@RepsForBiden
Retweet if you agree with @SenatorDurbin who calls for a criminal investigation of Trump's attempt to extort the Republican Secretary of State of GA. #trumptapes
03 Jan, 09:42 PM UTC

@Lawrence
Mark Meadows announced the names of all the criminal co-conspirators in the room with Trump at the beginning of the call. https://t.co/AYrKMiaqum
03 Jan, 10:32 PM UTC

@HamillHimself
YET ANOTHER "PERFECT" PHONE CALL- "Trump alternately berated Raffensperger, tried to flatter him, begged him to act and threatened him with vague criminal consequences if the secretary of state refused to pursue his false claims." #DonTheCon https://t.co/moqVDK9Us9
03 Jan, 09:57 PM UTC

@HamillHimself
Listening to the entire phone call is like discovering a long-lost episode of The Sopranos. https://t.co/bKK7TYtKUQ
03 Jan, 11:53 PM UTC

Steven Beschloss
@StevenBeschloss
I’d love to hear the dozen US senators bent on sedition explain how Trump’s call to the GA Secretary of State is just fine.
03 Jan, 07:11 PM UTC

@kylegriffin1
Every Republican challenging the Electoral College certification should have to listen to this audio in full and respond to it before the vote takes place this week. https://t.co/IKPjFJAGVp
03 Jan, 08:05 PM UTC

@NatashaBertrand
“The Post obtained a recording of the conversation in which Trump alternately berated Raffensperger, tried to flatter him, begged him to act and threatened him with vague criminal consequences if the secretary of state refused to pursue his false claims” https://t.co/e7riG7a2h8
03 Jan, 06:08 PM UTC

The Columbia Bugle 🇺🇸
@ColumbiaBugle
So the leaked phone call: -Shows Trump going thru all his evidence & numbers -Shows Trump is a fighter -Shows Trump isn’t quitting -And reminds everyone the GA Secretary of State is a phony Republican willing to ally with the Fake News Media. How exactly is this bad?
03 Jan, 11:26 PM UTC

@BeschlossDC
Painful and ugly to hear a President threatening a Secretary of State of one of our fifty states. Sounds like an FBI intercept of 1960s Mafia conversations.
03 Jan, 11:04 PM UTC

@fred_guttenberg
LISTEN TO THIS AUDIO of Trump, berating Georgia’s Secretary of State and urging him to ‘find’ more votes! This is fucking insanity. If you are supporting this coup, RESIGN!!! ME MUST WIN GEORGIA! Vote @ReverendWarnock @ossoff PLEASE RETWEET! https://t.co/ZVH21Ml8ZN
03 Jan, 06:51 PM UTC