@Kate_Riga24
A furious Sanders on Manchin/Sinema: "It's not just this vote. These are people who I think have undermined the President of the United States. They have forced us to go through five months of discussions which have gotten absolutely nowhere."
20 Jan, 03:46 AM UTC

@OccupyDemocrats
BREAKING: Bernie Sanders announces that "there is a very good chance" that Joe Manchin and Kyrsten Sinema will face Democratic primaries over their refusal to fix the filibuster and says he'd consider supporting their opponents. RT IF YOU WANT MANCHIN AND SINEMA PRIMARIED!
19 Jan, 07:16 PM UTC

@brianefallon
There will be lots of time to be mad at Manchin/Sinema but we should also take time to be grateful to the 48 Dems - including Senate lifers like Leahy and Feinstein, red staters like Tester and in-cycle folks like Kelly - who did the right thing, and Schumer for forcing the issue
20 Jan, 04:00 AM UTC

@RBReich
Let's be clear: By refusing to end the filibuster, Manchin and Sinema are giving Republicans the green light to cheat their way to victory in 2022, 2024, and every election thereafter.
19 Jan, 07:08 PM UTC

@mkraju
Manchin votes with Republicans and officially scuttles the Dem effort to change filibuster rules. Sinema breaks with her party as well and sides with GOP.
20 Jan, 03:26 AM UTC

🕯🙏𝗣𝗘𝗧𝗘𝗥🙏🕯
@apathetic_NY
ActBlue needs to remove Kyrsten Sinema’s and Joe Manchin’s donation pages from their site. Do you agree?
20 Jan, 05:27 AM UTC

@ezralevin
I'm sorry we lost, but I'm not sorry we fought for this. The generational struggle for a real multiracial democracy continues. And Sinema will never win elective office again.
20 Jan, 03:38 AM UTC

@RepCori
Tonight will be remembered in history as the night that Joe Manchin, Kyrsten Sinema, and Senate Republicans chose the racist legacy of Jim Crow over delivering voting rights.
20 Jan, 03:33 AM UTC

NoelCaslerComedy
@caslernoel
There’s something very off about Kyrsten Sinema, the stories don’t add up from her childhood, the tale of living in an abandoned gas station. The mormon years, the divorce, all the times she voted w GOP before this from predatory lending bills to killing wage increase.
20 Jan, 04:09 AM UTC

@IlhanMN
So Manchin and Sinema have voted for filibuster change many times for various other bill before, but won’t do it for a voting rights bill. Got it. https://t.co/QTOYUCjH2v
20 Jan, 04:32 AM UTC

@justinbaragona
The first one there to shake Kyrsten Sinema's hand is John Kennedy, one of the 8 GOP senators who voted to overturn Biden's election victory. https://t.co/EDkQCrHnke
20 Jan, 04:14 AM UTC

@RBReich
Can the media please talk about the fact that both Sinema and Manchin voted just 41 days ago to carve the debt ceiling out from the filibuster's 60-vote threshold? They’re willing to do it for the debt – but not for voting rights. An absolute disgrace.
19 Jan, 09:33 PM UTC

@bryanbehar
GOP + Manchin + Sinema: “Tje American senate has never, ever voted without upholding the filibuster.” Amy Klobuchar: “Except for the 160 times they have.”
20 Jan, 05:26 AM UTC

@AllisonMPecorin
Asked Sen. Kyrsten Sinema, as she left the floor after casting her vote against changing the Senate rules, what she thinks the next steps on voting rights are. “Have a nice night,” she said.
20 Jan, 03:40 AM UTC

Jack Cocchiarella
@JDCocchiarella
Kyrsten Sinema was shaking hands with Republicans after last night's vote. We're going to primary the hell out of her.
20 Jan, 01:00 PM UTC

@kylegriffin1
EMILY's List: "We believe the decision by Sen. Sinema is not only a blow to voting rights and our electoral system but also to the work of all of the partners who supported her victory and her constituents." "We will no longer be able to endorse Sen. Sinema moving forward."
20 Jan, 04:25 PM UTC

Primary Sinema Project
@PrimarySinemaAZ
BREAKING: Kyrsten Sinema just sided with 50 GOP Senators in order to stop the passage of critical voting rights legislation. We're not going to let her get away with this. Want to join the movement? Simply retweet and follow us. Let’s get a better Senator.
20 Jan, 03:47 AM UTC

southpaw
@nycsouthpaw
It was Joe Manchin’s fuckin bill! They already gave up on the admin/leadership bill last year to let Manchin try his compromise measure. Manchin failed to attract a single Republican vote, and then Manchin and Sinema teamed up to tank the possibility of it passing without. https://t.co/iCbgzy9XE6
20 Jan, 05:17 AM UTC

Whatever🔥Heather
@FeistyPK2
Manchin and Sinema are pieces of fucking shit.
20 Jan, 04:47 AM UTC

@PalmerReport
One more time for the pundits who still don't get it: the current senate vote over voting rights legislation is DESIGNED TO FAIL, so as to put the media and public spotlight on Manchin and Sinema, and squeeze them into a pulp so they'll feel pressured to cave on this later.
20 Jan, 02:22 AM UTC

@ChristinaPushaw
Progressive men are very feminist and support strong women, except for when they advocate for violence against women who step out of line, like Kyrsten Sinema. https://t.co/yEcMnP8iKD
20 Jan, 11:49 AM UTC

@ggreenwald
What are Democrats supposed to do to Sen. Sinema with "the backs of their hands," @RBReich? 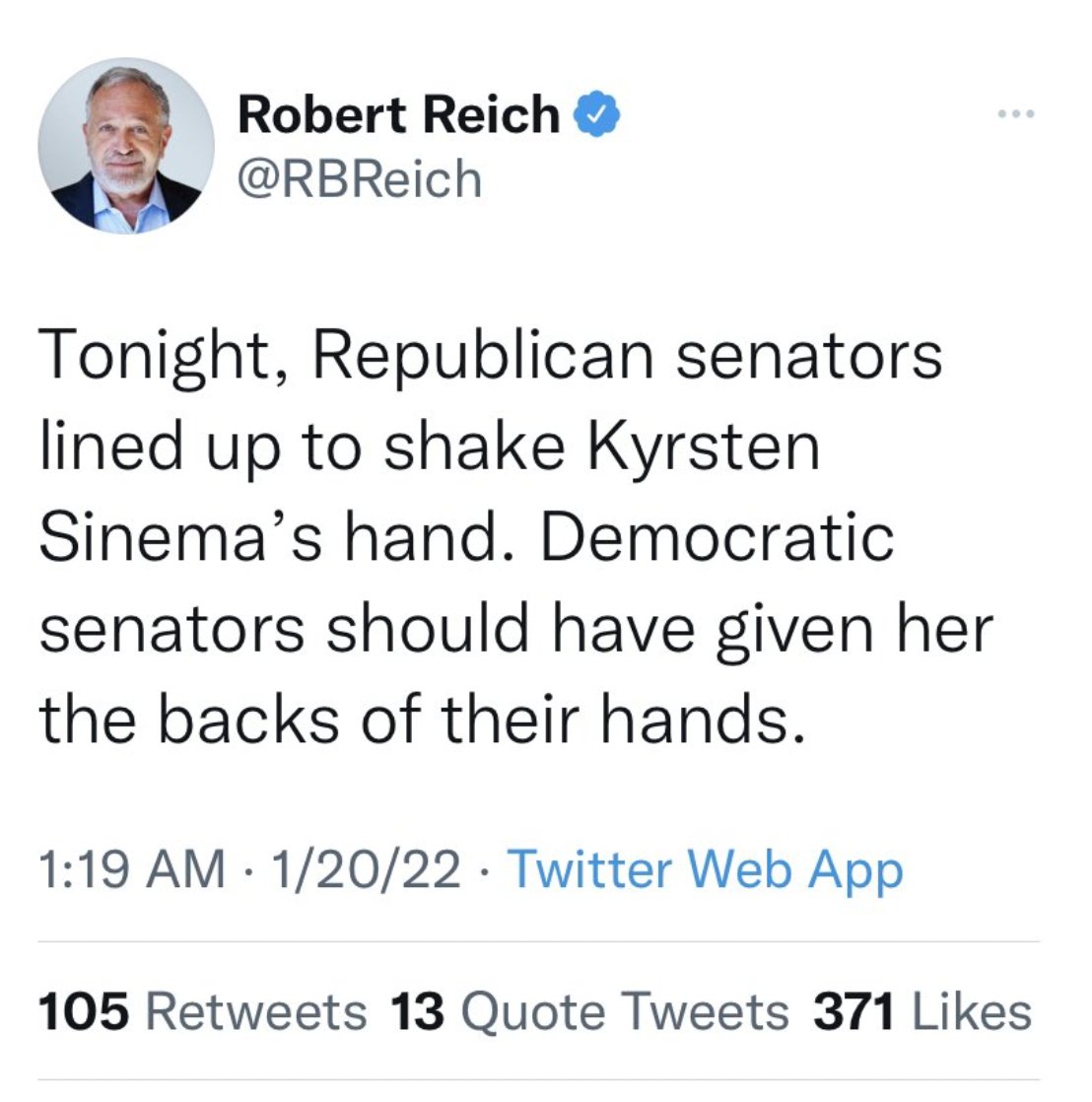 Uncovering The Truth
@UncvrngTheTruth
Kyrsten Sinema gleefully voted against the Voting Rights’ Act. Then, she pranced over to Mitch McConnell and shook his hand. She had coordinated with McConnell the whole time. Like the traitor that she is. Putin couldn’t have picked a better puppet. Vote her out. #MoscowSinema
20 Jan, 04:59 AM UTC

Steven Beschloss
@StevenBeschloss
I wonder what madcap costume Kyrsten Sinema will wear when the Republicans are dancing on the grave of democracy.
20 Jan, 06:35 AM UTC

@kai_newkirk
Sinema staffers. Your boss is going down in flames of historic infamy & political debacle. But perhaps she is not now the Senator you once hoped she was. You can still recover your own moral dignity and political future. Resign. Do it publicly. And join the right side of history.
20 Jan, 03:58 AM UTC

💀 Scary Larry 💀 🇺🇸🌊✊🏻🗽
@StompTheGOP
There’s no other way to put it. Joe Manchin and Kyrsten Sinema are corrupt whores who have been bought and sold by republicans to destroy our democracy.
20 Jan, 04:22 AM UTC