@neal_katyal
"The legal doctrine of stare decisis requires us, absent special circumstances, to treat like cases alike. The Louisiana law imposes a burden on access to abortion just as severe as that imposed by the Texas law, for the same reasons. Therefore Louisiana’s law cannot stand" CJ op
29 Jun, 02:13 PM UTC

@RyanTAnd
Unreal. Justice Roberts just voted with the four liberals on an abortion case because of stare decisis... The precedent he's upholding is from a case just four years ago, that he dissented on. If he thought the Court got it wrong four years ago, today was his chance to correct it
29 Jun, 02:15 PM UTC

@AndrewCMcCarthy
Stare decisis means I have to vote in favor of something I think is wrong and said was wrong 5 minutes ago. Chief Justice Roberts ... 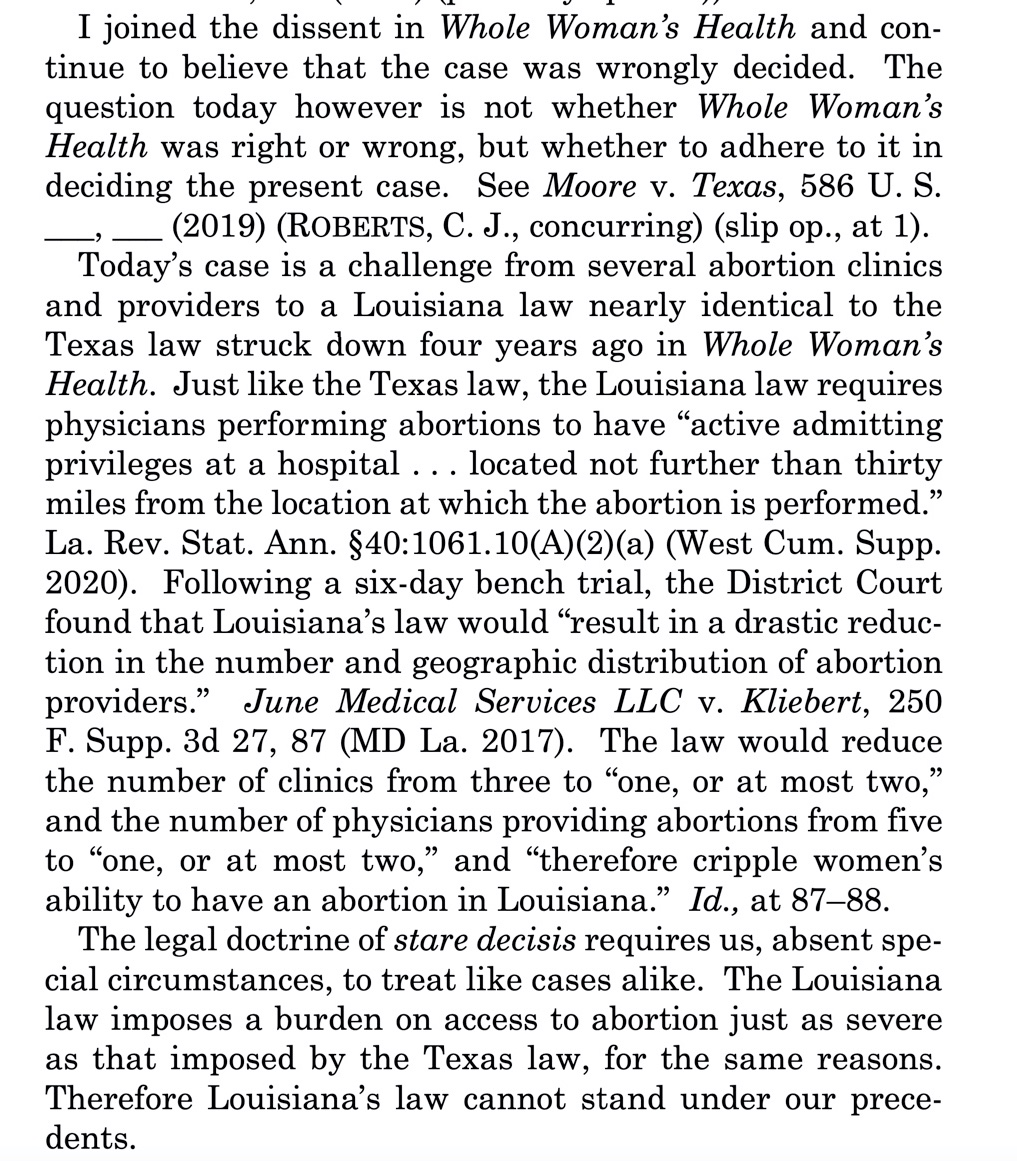 @SenMikeLee
Today was a big win for abortion providers and a huge loss for the unborn and the Constitution. The Constitution contains no right to abortion and this Court’s highly selective use of stare decisis defies logic and reason.
29 Jun, 03:35 PM UTC

@ishapiro
Roberts didn't think stare decisis was that strong in Citizens United, Janus, and Knick, cases in which the precedent was much older and more entrenched. #CatoSCOTUS
29 Jun, 03:01 PM UTC

@kurteichenwald
SCOTUS abortion decision reveals nothing about Roberts. It just shows the other 4 conservs dont follow standards of judicial review. The precedent is 4 yrs old. Stare decisis is the basic standard of judicial review so constitutional findings dont switch back and forth.../1
29 Jun, 03:52 PM UTC

@AngryBlackLady
Roberts: "The legal doctrine of stare decisis requires us... to treat like cases alike. The Louisiana law imposes a burden on access to abortion just as severe as that imposed by the Texas law, for the same reasons. Therefore, Louisiana's law cannot stand under our precedents."
29 Jun, 02:28 PM UTC

Margot Cleveland
@ProfMJCleveland
Who thinks stare decisis will be out the window for Roberts if Heller is revisited.
29 Jun, 02:51 PM UTC

@ishapiro
On June Medical: Setting aside the constitutional merits of the La. abortion regulations and how close they are to the Texas ones that the Court invalidated four years ago in Whole Women’s Health, CJ Roberts’s capricious application of stare decisis is startling. #CatoSCOTUS 1/x
29 Jun, 03:40 PM UTC

Mia Brett
@QueenMab87
Any justice who was in the dissent on June Medical said fuck stare decisis this morning. Whole women’s health was 4 years ago. This is a foundational premise of American jurisprudence that 4 justices just ignored out of personal feelings on abortion
29 Jun, 03:48 PM UTC

David Horowitz
@horowitz39
Stare Decisis. From the signing of the Constitution in 1787 to 1961, prayer in the schools was constitutional. Then the corrupt lawyers on the Supreme Court simply decided that it was not. So much for Stare Decisis when it interferes with the left's destructive agendas.
29 Jun, 03:30 PM UTC

@josh_hammer
We need express litmus tests for the role of stare decisis in constitutional adjudication. Nothing less than Clarence Thomas’s position should suffice.
29 Jun, 04:03 PM UTC

@greg_price11
Roberts literally dissented in the case that he references here as precedent for his decision today. "Stare Decisis" apparently only matters to him when it comes to upholding 5-4 liberal majorities. https://t.co/CkdnaOzPpA
29 Jun, 04:10 PM UTC

@ishapiro
Stare decisis didn’t stop him from overturning precedent in Citizens United, Janus, and Knick, cases in which the precedent was much older and more entrenched, but a very recent 5-4 decision in which he dissented apparently carries more weight. 2/x
29 Jun, 03:41 PM UTC

File411
@File411
@MuellerSheWrote This is the 1st Ruling & it’s historic Roe v Wade is the law of the land And CJ Roberts honored stare decisis since 2016 SCOTUS held the TX law was unconstitutional The Louisiana Abortion law in identical https://t.co/DyVGUsFQI2
29 Jun, 02:52 PM UTC

@ishapiro
Mind you, I think Roberts was correct in all those earlier cases, and his concurring exposition of stare decisis in Citizens United was well done. But that doesn’t jib with what he wrote today... 3/x
29 Jun, 03:42 PM UTC

Mike Dunford
@questauthority
The most important opinion, in many ways, will be Roberts's concurrence. Roberts, who was in the minority in Whole Woman’s Health v Hellerstedt, concurs in the judgment on the basis that Whole Woman's Health controls. It's a critical defense of stare decisis at a critical time. https://t.co/si7Rvyc5EP
29 Jun, 02:26 PM UTC

Owen Barcala
@obarcala
CJ Robert's concurrence in judgment is solely on stare decisis because the statute at issue is almost identical to that which was vacated in Whole Woman's Health. He still disagrees with WWH's holding. Good odds he would go the other way if presented with a different statute. https://t.co/eVnlXlRpPK
29 Jun, 03:21 PM UTC

@CharlotteAlter
"The legal doctrine of stare decisis requires us, absent special circumstances, to treat like cases alike. The LA law imposes a burden on access to abortion just as severe as that imposed by the TX law, for the same reasons. Therefore LA’s law cannot stand under our precedents."
29 Jun, 02:44 PM UTC

JohnLee
@JohnSLee317
@SallyAlbright Roberts. He's making this Court his. It's actually quite amazing. But again, I wouldn't read much into it. He's got some more doozies that will inform us if he truly believes in stare decisis. I know this much, it's a fool's errand to predict anything when it comes to SCOTUS.
29 Jun, 03:27 PM UTC

Ben_Franklin speaks by ventriloquist
@_Ben_Franklin1
What was all that pompous verbiage about stare Decisis and Kavanaugh's promises that he respects precedent @SenatorCollins ? You really aren't up to the job https://t.co/SeVS8DWCBi
29 Jun, 02:28 PM UTC

Calvin Freiburger
@CalFreiburger
.@DavidAFrench: *lectures conservatives that they wouldn't have been surprised if they read the oral arguments* Also @DavidAFrench: "I'm somewhat surprised" that Roberts behaved exactly like the stare decisis fanatic he told us he was all the way back in 2005. https://t.co/xnk2xu2zUc
29 Jun, 04:25 PM UTC

Morgan Feldman⭐️⭐️⭐️
@MorganFeldman7
@AndrewCMcCarthy @RonColeman How can anything change if stare decisis overrides any other principle? If you keep piling on one bad decision after another w/o going back to look at the facts of the primary case and consider the law surrounding it, what’s the point of taking these cases?
29 Jun, 04:27 PM UTC

@LeahLitman
@SonjaStarr Another option would have been for him to say 'stare decisis' not only as to outcome, but as to reasoning/legal test as well. (His recitation of what WWH's legal standard is is obviously wrong, and he makes clear he would junk it.)
29 Jun, 04:28 PM UTC

Kent Bush
@Kentbush
It's weird when conservative justices - and some governors - pay no mind to stare decisis. Precedent isn't only important when it fits your personal worldview. You can't rail against judges who legislate and then support decisions that would force the courts to ignore precedent.
29 Jun, 04:27 PM UTC