Nathan Dennis 🇺🇦
@nathansldennis
If any of you are wondering if the collapse of the £ was planned by #kamakwasi Kwartang then you haven't been paying attention... A short thread on shorting the £ and acquiring cheap sterling assetts, and its all linked to #Brexit 1/
23 Sep, 04:22 PM UTC

Jonathan Lis
@jonlis1
I repeat: today saw the same fall in sterling that happened on Black Wednesday 30 years ago. It was exceeded only by the fall the day we voted for Brexit. This wasn’t about external factors: the government chose it. Today should be known as Black Friday.
23 Sep, 08:12 PM UTC

Will Thorpe
@withorpe
Rees Mogg has received £22k in donations from Crispin Odey, a hedge fund manager who profits from betting on the collapse of sterling, the failure of top British companies and soaring energy prices (via Byline Times)
23 Sep, 05:15 PM UTC 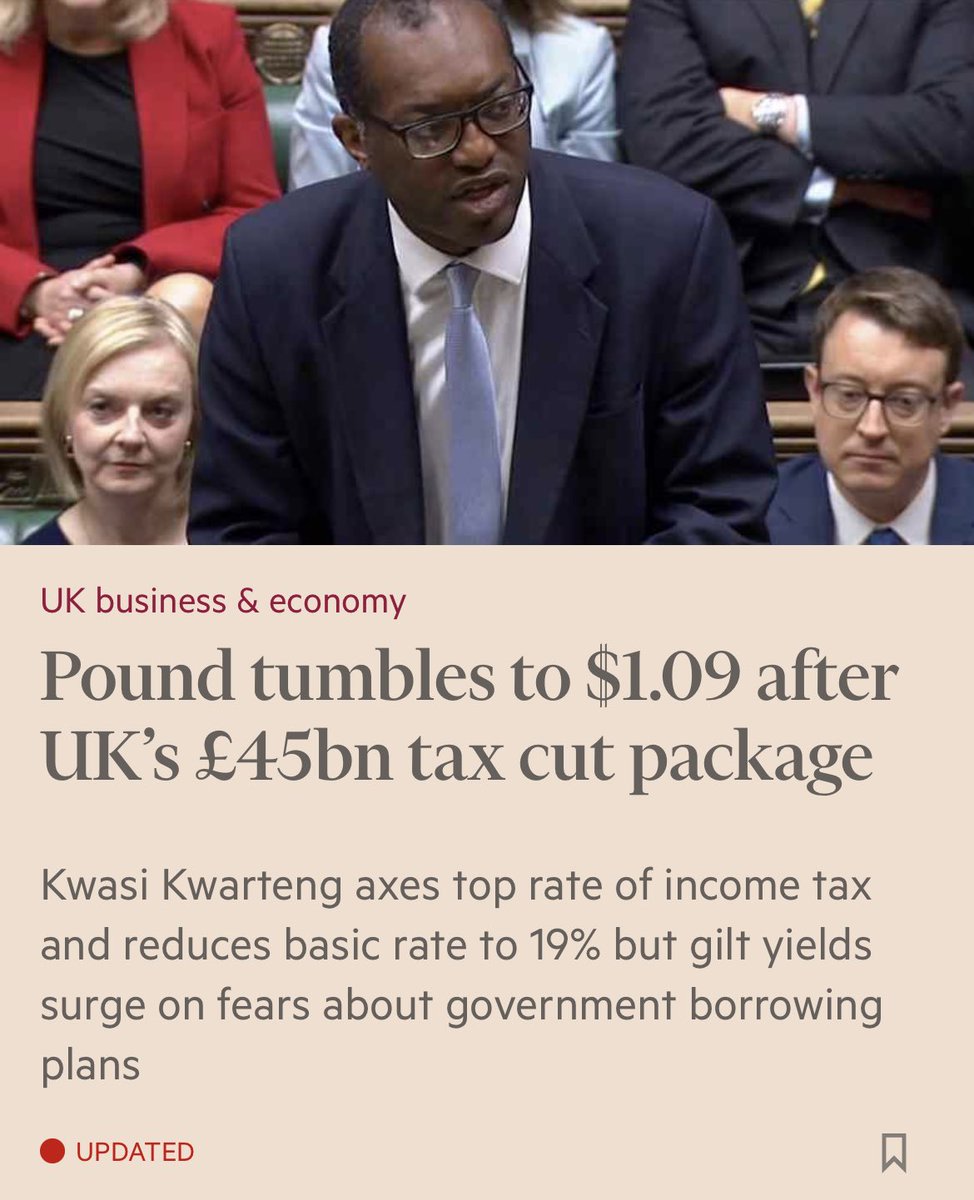 @mikegalsworthy
A drop in Sterling this large is very significant because it makes our imports *more expensive*. That means that it pushes basic cost-of-living higher, exacerbating the cost-of-living crisis. AND it’s inflationary. Kwarteng’s misjudgment has made for a much harsher winter.
23 Sep, 08:08 PM UTC

@Ianblackford_MP
The sheer recklessness of the chancellors statement is awe inspiring and playing fire with the competency of the treasury. This is economic illiteracy that will do nothing to stem the fall in sterling nor to assist the desire to restrain inflation. 1/2
23 Sep, 09:03 AM UTC

@lewis_goodall
Worth remembering why this matters. Sterling tanks, we get poorer in relative terms. It results in inflation because all the foreign goods we buy become more expensive, which could quickly eliminate any gains people on ordinary incomes get from tax cuts if the slide is permanent. https://t.co/2Bz6gj8MGB
23 Sep, 03:09 PM UTC

Prem Sikka
@premnsikka
It is the worst budget statement in my lifetime that enriches the richest. Even the hardened capitalists know that without good purchasing power for the people, they can't make profits. Just as the Chancellor spoke £ Sterling exchange rate fell and FTSE is down.
23 Sep, 11:27 AM UTC

@mikegalsworthy
For anyone saying, with happy vapidity, “this is a true Conservative budget”… -and not understanding why Sterling is tanking- … You may wish to read this brutal analysis of what’s just happened. 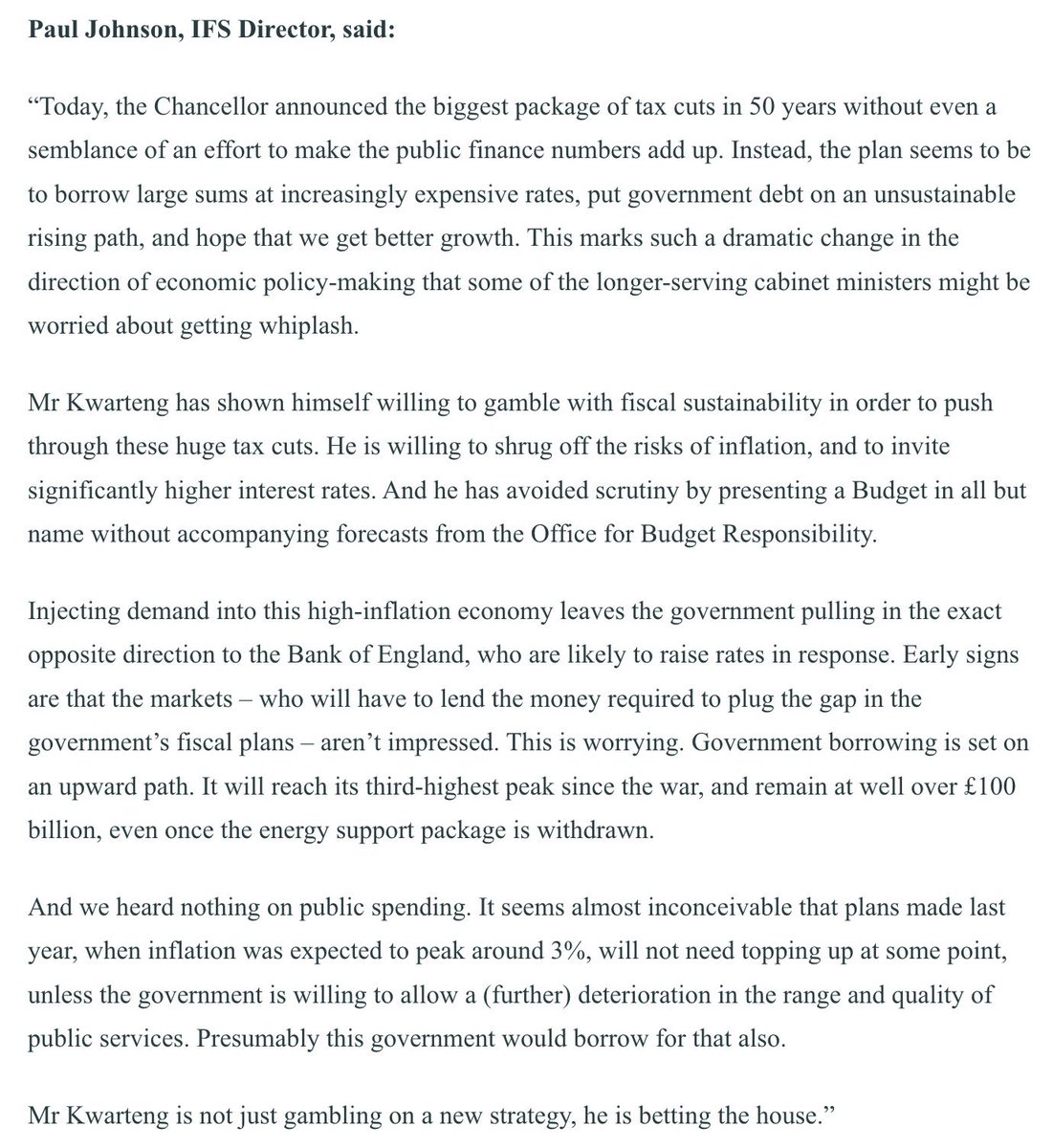 @CPhilpOfficial
Great to see sterling strengthening on the back of the new UK Growth Plan https://t.co/Ec8tgXkgKd
23 Sep, 09:17 AM UTC

Russ Jones
@RussInCheshire
INVESTORS WILL INVEST [ investors immediately sell as much sterling as they possibly can, and describe us as a "submerging economy" with "naive" policies ] https://t.co/0qjPkADDZH
23 Sep, 09:25 PM UTC

⚫ Ethics advisor, NOT resigning
@AmrineDouglas
@DehennaDavison Yes, it IS immoral to let Tory donors BUY policies that make them richer and everyone else poorer. You are crashing our economy at warp speed, and sterling is a basket case. But Tories have made your donors very happy indeed. I call that corruption. https://t.co/st2QjmUd2K
23 Sep, 11:25 AM UTC

REJOIN AND REFORM #RejoinReform
@sonofr
Because of the collapse of sterling, instead of helping people with the cost of living crisis, Kwarteng has just just made the problem worse. EVERYTHING is going to be more expensive. The Tory thickorati have played a blinder; Brexit and a sterling crisis, all home grown. Nuts!
24 Sep, 06:06 AM UTC

Sorrentina 🇪🇺🇬🇧🇮🇹 #FBPE 3.5% #SardinesUK
@Sangita123000
@PippaCrerar So they deliberately shorted the market so their hedge fund oligarch friends could make even more millions on the tumbling of sterling etc. Tories are corrupt to the core, ALL OF THEM! We are not fooled by them at all ……
23 Sep, 10:55 AM UTC

Prem Sikka
@premnsikka
UK Govt policies have crashed the value of Pound Sterling v US $. Commodities are priced in US $. So UK is importing inflation. Motorists are paying £5 more per tank of petrol, more after yesterday's fall in the value of £. Govt for the rich doesn't care. https://t.co/xzibm6KFm1
24 Sep, 06:40 AM UTC

Julian Jessop
@julianHjessop
In short, talk of 'market meltdown' and a 'sterling crisis' is still overdone. It may take more time to win over investors and the general public, but the most important thing is to get the economics right. This is a good start, despite the negative headlines. [Ends].
24 Sep, 06:31 AM UTC

ARC SOLAR UGANDA
@arcsolarug
Are you still plagued by costly electricity bills or inaccessibility to a power station? Do you want to get out of the woods and realize power freedom? Be like STERLING NURSERY & PRIMARY SCHOOL in luweero & install solar. Call for your free quotation now 0784779414 0703316194 https://t.co/SNrnb4wuNi
24 Sep, 04:55 AM UTC

Jesus of Sao Paulo
@27AmateurAuteur
I have seen Arsenal fans defend Mount, Foden, TAA, Sterling and James. But opposition fans can't even see that Saka was played out of position and still delivered an average performance. They will attack Saka with all they have. Peak tribalism
24 Sep, 05:50 AM UTC

Julian Jessop
@julianHjessop
The slump in #sterling is still primarily about dollar strength. The US currency has been strong across the board, reflecting the relatively aggressive #Fed tightening (three ¾ point rate hikes in a row), the lower exposure to Europe’s #energycrisis, and safe-haven demand...
24 Sep, 06:31 AM UTC