Tehran is trending on Twitter. Popular tweets on Tehran.

Rezvani | seeking not to persuade by anger or pity
@JrRezvani
"Sanskrit has a rich history and have many literary works in India , but it's a dead language now." Ok, I don't know about Sanskrit in India. But, I know it's alive in Iran; being researched/taught in Depts., of Sanskrit at the universities of Tehran, Esfahan, Shiraz, etc.,
07 Apr, 04:29 AM UTC

@Kredo0
Context: The last time Iranian leaders said this, the Obama admin had just agreed to rollback sanctions and give Tehran billions before it even agreed to stop building a bomb https://t.co/8yNP2xKYyr
06 Apr, 05:02 PM UTC

IRAN HRM
@IranHrm
Ali Younesi & Amirhossein Moradi, 2 honor students at the Sharif University of Technology in Tehran, have been in detention since 360 days ago without any announced charges. Both are under pressure to provide forced “confessions”. #Iran #HumanRights https://t.co/jOMUpbzadL https://t.co/7xrm7bWsRr
06 Apr, 05:11 PM UTC

Dylan Gresik
@DylanGresik
THREAD: We should be skeptical of news of the indictment of 10 people in the case of #PS752. As “indirect talks” on the #JCPOA begin today, this announcement is another attempt by Iran to mislead the world & portray itself as a responsible actor. 1/7 🧵⤵️ https://t.co/P5e7PQdaU8
06 Apr, 06:24 PM UTC

فدراسيون عصر آنارشيسم Federation of Anarchism Era
@asranarshism
Yesterday a political prisoner (Shahla Jahanbin) was released from Evin Prison in Tehran, today she was arrested again and returned to prison. The regime claimed that her release was a mistake,so we arrested her again! Thid is de justice of Islamic regime of Iran and how it works
06 Apr, 10:18 PM UTC

@joeyayoub
On the eve of Holocaust Remembrance Day, the chairman of Israel's Religious Zionist Party - which won six seats in the Knesset - is openly calling for the ethnic cleansing of Palestinians on Twitter https://t.co/paGcWN7IGZ
07 Apr, 01:18 PM UTC

Yasameen Al-Nadheri ياسمين الناظري
@YNadheri
I was thrilled to be part of this panel of distinguished women discussing women and the Arab uprisings 10 years on. Thanks to @CarnegieMEC and @fnfmena for hosting. Watch by clicking the link below: https://t.co/pQKVXJyb74
07 Apr, 11:51 AM UTC

ayşe d lokman
@aysed_9
#ISA2021 come to the panel (I am biased as the chair/discussant) in WB42: Islam, Sectarianism, and Security at 9:30 EST! One paper on Sectarian Attitudes in MENA and one on Moderate Islam through Ontological Security in Malaysia!! https://t.co/7mTJ4j0xny
07 Apr, 01:18 PM UTC

@starsandstripes
An Iranian ship believed to be a base for the paramilitary Revolutionary Guard in the Red Sea off Yemen has been attacked, Tehran said. https://t.co/YIZq2n6JeM
07 Apr, 12:00 PM UTC 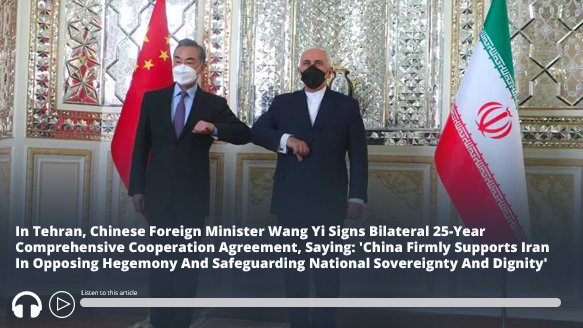 Ramtin
@killerwhale24
@zlj517 more evidence of Iranians across the world expressing their dissatisfaction with recent agreement between Chinese & Mullahs in Tehran. Your government will tremendously regret their decision for conducting business with the mullahs. Video: Australia on 4/6/21 https://t.co/lMIWjga7AX
07 Apr, 11:17 AM UTC

@KayhanLife
#Iran Has Produced 55 KG of 20% Enriched Uranium since January – Official The disclosure comes a day after #Tehran and Washington held what they described as “constructive” indirect talks in Vienna #JCPOA #IranNuclearDeal https://t.co/tJXHOluqsX
07 Apr, 01:28 PM UTC