@Grant2Will
If Alabama makes the CFP I’m bringing it up in every interview the rest of the month. That would be absolutely absurd. If TCU and OSU get the last two spots I get it but if not it should be UGA vs OSU and Michigan vs TENNESSEE
03 Dec, 09:15 PM UTC

@dannykanell
Since Nick Saban wants to talk about point spreads can someone remind him they were favored vs LSU and Tennessee and lost both games. It’s absolutely embarrassing to be politicking like this.
04 Dec, 03:06 AM UTC

Tennessee Baseball Network
@tnballplayers
Tennessee Baseball Head Coach Tony Vitello speaks his mind when asked about only having 11.7 total scholarships and no option to pay their third assistant coach. https://t.co/cmtLlskwCk
03 Dec, 05:54 AM UTC 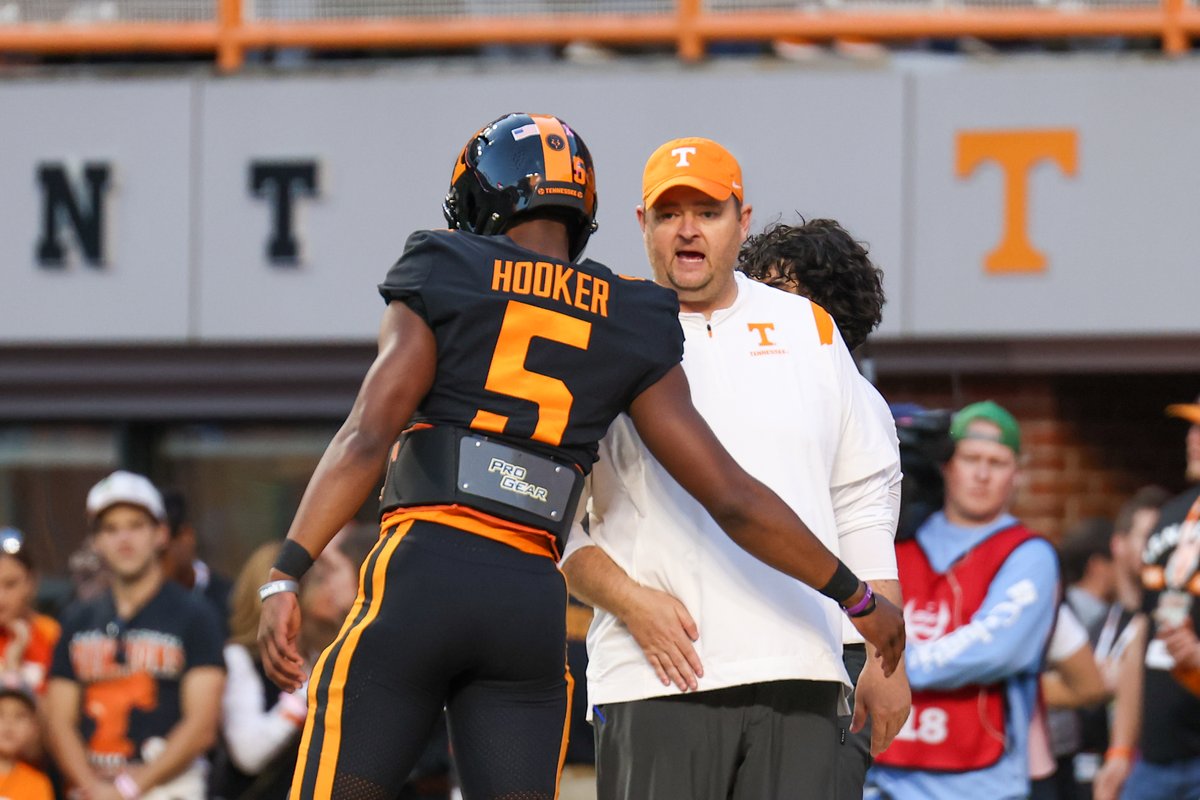 @ClintRLamb
Alabama needed… Tennessee Clemson LSU USC TCU ALL to lose to have a shot, and it might actually happen. Guys, I’m starting to think God wants Bama in the Playoff 😂
03 Dec, 08:11 PM UTC

CFB Home
@CFBHome
I would put Tennessee in the playoffs before Alabama
03 Dec, 04:46 AM UTC

@ClayTravis
Worth noting Alabama was favored by 8.5 over Tennessee and by two touchdowns over LSU and lost both outright. Also failed to cover as 20+ point favorites against both Texas and Texas A&M and nearly lost both of those games too.
04 Dec, 03:15 AM UTC

🚫🔑LEE Ring0️⃣
@HBTFD1
Tennessee deserve a shot at the playoff more than Alabama, if I’m not mistaken Tennessee beat Bama. But what do I know.
03 Dec, 04:47 AM UTC

Charlie Burris
@Charlie_Burris
Saban getting to go on the Big Ten Championship halftime show and plead his pathetic case for a playoff spot is sickening. TENNESSEE. BEAT. THEM.
04 Dec, 03:06 AM UTC

The Tennessee Holler
@TheTNHoller
So @GovBillLee passes on $27 Million in grants from a FEDERAL program (HUD) while Tennessee hoards more money for low income families than any state and gets ~40% of our budget from the federal government— and this is how @FOXNashville frames it? 🤔 https://t.co/q8Mf3SH5GT
03 Dec, 06:32 PM UTC

On3
@On3sports
Tennessee OC Alex Golesh has accepted an offer to become the head coach at South Florida, per @Brett_McMurphy. Story: https://t.co/g2IkxTUl7s https://t.co/a8sh4zILjX
04 Dec, 02:51 AM UTC

@aaronmurray11
Alabama fans keep hitting me up that I’m scared The dumbest argument. You do not deserve it! You lost to a LSU team that just got crushed by UGA. You lost to a Tennessee team that got blown out by South Carolina. YOU ARE NOT ELITE THIS YEAR! Life will go on
04 Dec, 03:44 AM UTC

Ryan Brauninger
@R_Brauninger
In 2020, Jimbo Fisher got about 50 seconds to make his case for why A&M should have been in the playoff in a postgame interview on the sideline in Knoxville after the Aggies beat Tennessee. Nick Saban just got a 10 minute campaign on Fox at halftime of the Big 10 title game.
04 Dec, 03:16 AM UTC

Dirt Knox
@dirt_knox
If you never believed that there’s a clear bias against Tennessee, jot down everything about the 2022 season. Yes, we shot ourselves in the foot. But, objectively, we are head and shoulders above some teams getting a pass, and Hendo is the clear Heisman front. Unreal. *repost
03 Dec, 11:36 PM UTC

zach ragan
@zachTNT
One of the best things this season was the “real football” reference from Alex Golesh after Tennessee beat Kentucky https://t.co/6qHnICFTvG
04 Dec, 03:52 AM UTC

Volunteer Sports Network
@VSNtweets_
#VolTwitter this better BLOWUP🍊‼️ Show @CFBPlayoff that #Tennessee deserves it more based off their criteria…👀 https://t.co/2rA3f5F2J6
04 Dec, 04:10 AM UTC

@byjoelanderson
Bama’s strongest case for playoff inclusion is: beating four-loss Mississippi, and losing close road games to four-loss LSU and a Tennessee team whose best win was over them. Ok. They got it. Put in Tennessee and LSU too, since they so gotdamn tough.
04 Dec, 04:12 AM UTC

Chris Burnette 🏆
@BernieDawg
I hear tennessee had plans to storm the field tonight in the event of an lsu win. The subsequent gofundme has been suspended.
04 Dec, 02:21 AM UTC

CALL ME CHAMP Sugurray from UGA 🏆🏌️‍♂️🍻🏈🐶🍻🏆
@sugurray4UGA
If you put your record up vs. OHIO ST, TCU, TENNESSEE, Michigan, and Georgia and not LIST the NAME of any schools...Your team would be an underdog to EVERY SINGLE ONE OF THEM...with that said trying to backdoor yourself in gonna hurt on Sunday. https://t.co/S5PyJKxNPW
04 Dec, 04:13 AM UTC

Greg Wilson
@joke2power
@TheTNHoller @GovBillLee @FOXNashville Questions: Why do Tennessee Govt officials want to inflict pain on their own constituents? If 40% of state budget is from Feds, why do TN GOPers complain about federal Govt so much? But for Fed $, TN residents would be even poorer. There are 100s of 1,000s in TN going without
03 Dec, 11:30 PM UTC

Hunter Lehman
@HunterLehman6
This narrative being pushed that Golesh has never called plays is so stupid and false. He called the plays at Tennessee and if I had to guess will call them at USF. Calm down.
04 Dec, 04:07 AM UTC

Gene Bryant
@GeneBryant2
CNN reports on rhetoric against Latino students by a Hamilton County (Chattanooga, TN) school board member, who describes herself as a conservative Christian, that is creating tensions. https://t.co/PcDkjZGF54
04 Dec, 12:38 AM UTC

Denzell Bowers
@Denzell_Of_NSH
Best thing Tennessee could do is promote from within. Keep the Heupel Way rolling.
04 Dec, 04:15 AM UTC