"The SNP" is trending

Popular tweets on "The SNP".

@theSNP
✊ BREAKING: @NicolaSturgeon has announced the SNP are launching a major campaign to defend Scottish democracy. 🗳 The people of Scotland must have a choice on our future. 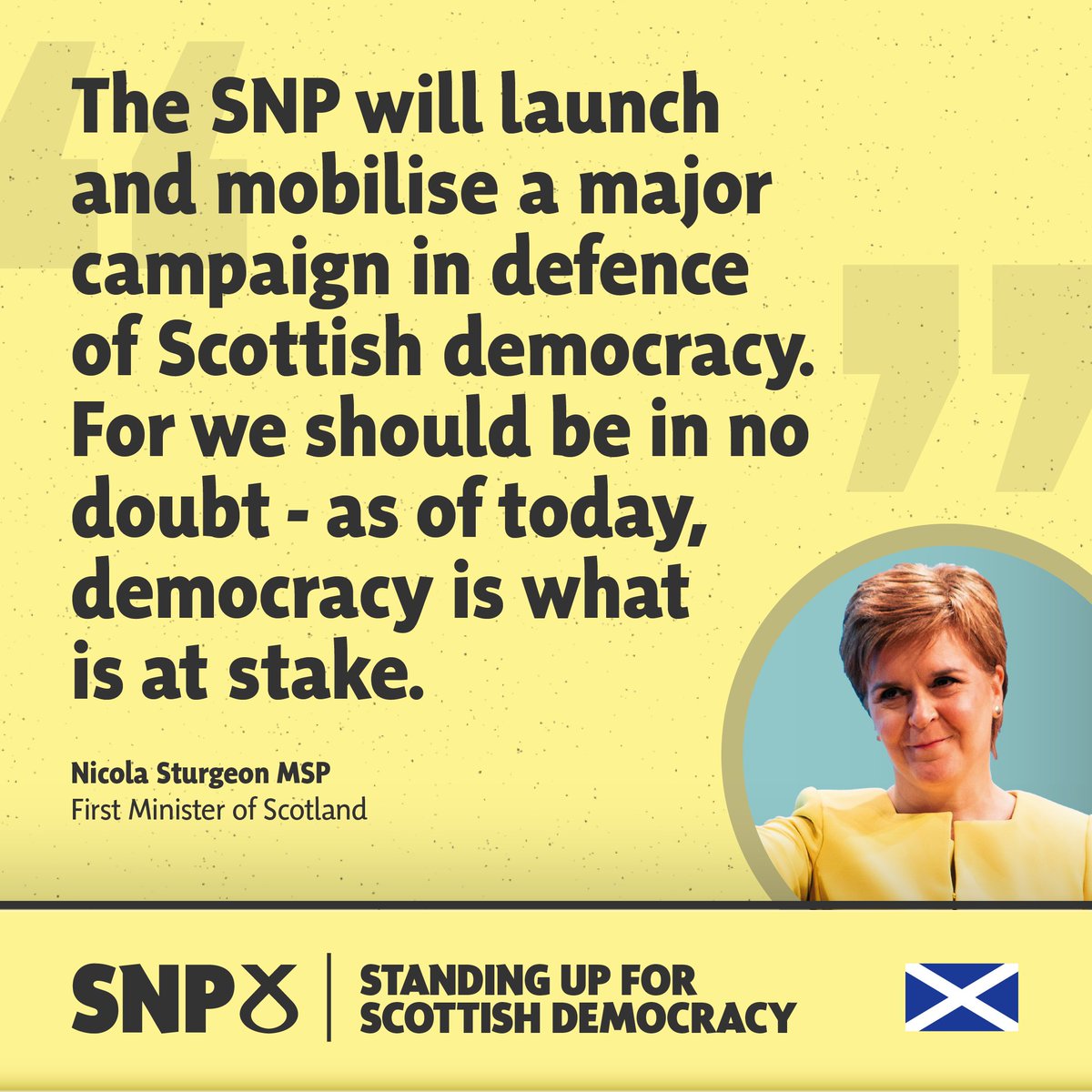 @AdamBienkov
The Speaker Lindsay Hoyle says he will not refer Nadine Dorries to the Privileges Committee for misleading MPs and condemns the SNP's John Nicolson for revealing his decision on Twitter.
23 Nov, 12:38 PM UTC

@murdo_fraser
Wasn’t there supposed to be thousands at this pro-independence rally at Holyrood? There’s barely 200 there, and take out the SNP staffers and that leaves a few dozen dejected souls. It’s over.
23 Nov, 06:12 PM UTC

@theresa_may
The SNP has the opportunity for once to put the people of Scotland 🏴󠁧󠁢󠁳󠁣󠁴󠁿 first & end its obsession with breaking us apart. 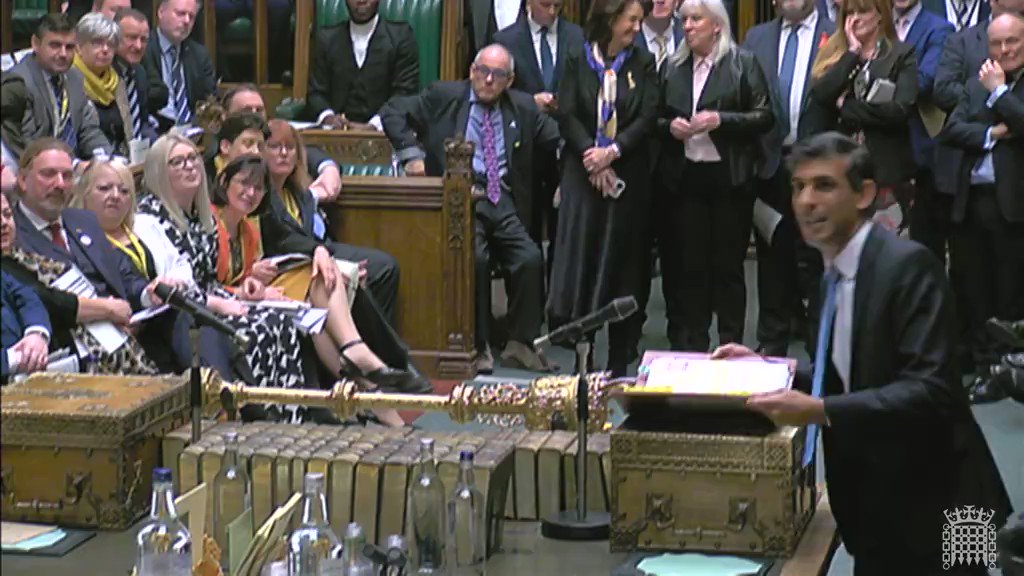 @RuthDavidsonPC
While this ruling isn't surprising, its unanimity & clarity is welcome. No doubt the SNP will try to leverage this ruling for further grievance. If only the huge effort, capacity & resource spent bidding to rerun the original vote had been put into health, education & the economy https://t.co/rXlrNb8lrQ
23 Nov, 10:21 AM UTC

@darrengrimes_
How much taxpayer cash did Sturgeon waste on this court case? Meanwhile Scotland’s schools, hospitals and drug problem is sidelined by the SNP’s quest for ‘independence’, ‘independence’ set to be surrendered to Brussels. It’s all self-indulgent in the extreme.
23 Nov, 11:29 AM UTC

@PamGosalMSP
After months, if not years, of the SNP telling women that their concerns over the GRR Bill were imaginary, the UN expert on violence against women and girls has confirmed that the SNP’s plans present ‘potential risks’ to their safety 👇 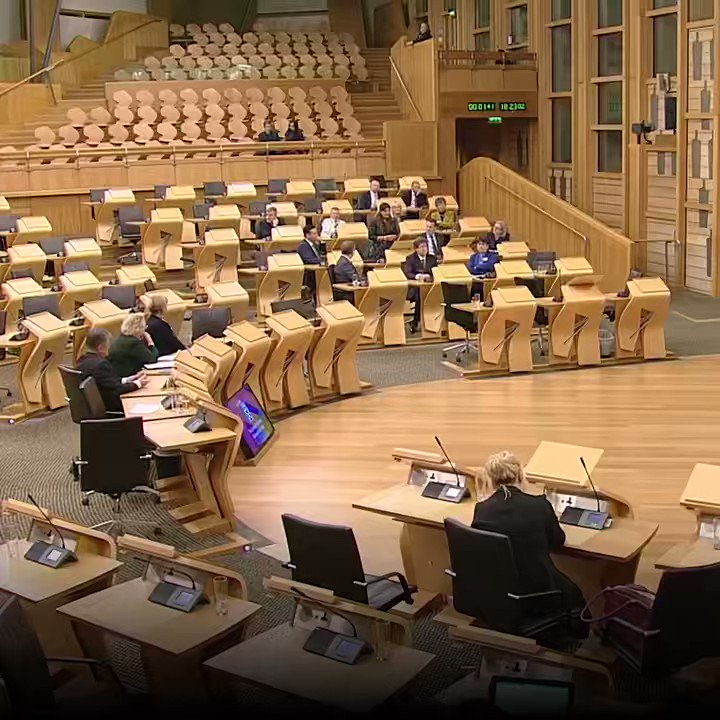 @rosscolquhoun
🏴󠁧󠁢󠁳󠁣󠁴󠁿 A snap poll by Channel 4 has indicated that around 50% of voters in Scotland would back the SNP at a General Election if it meant Scotland would leave the UK, before an election campaign has started. 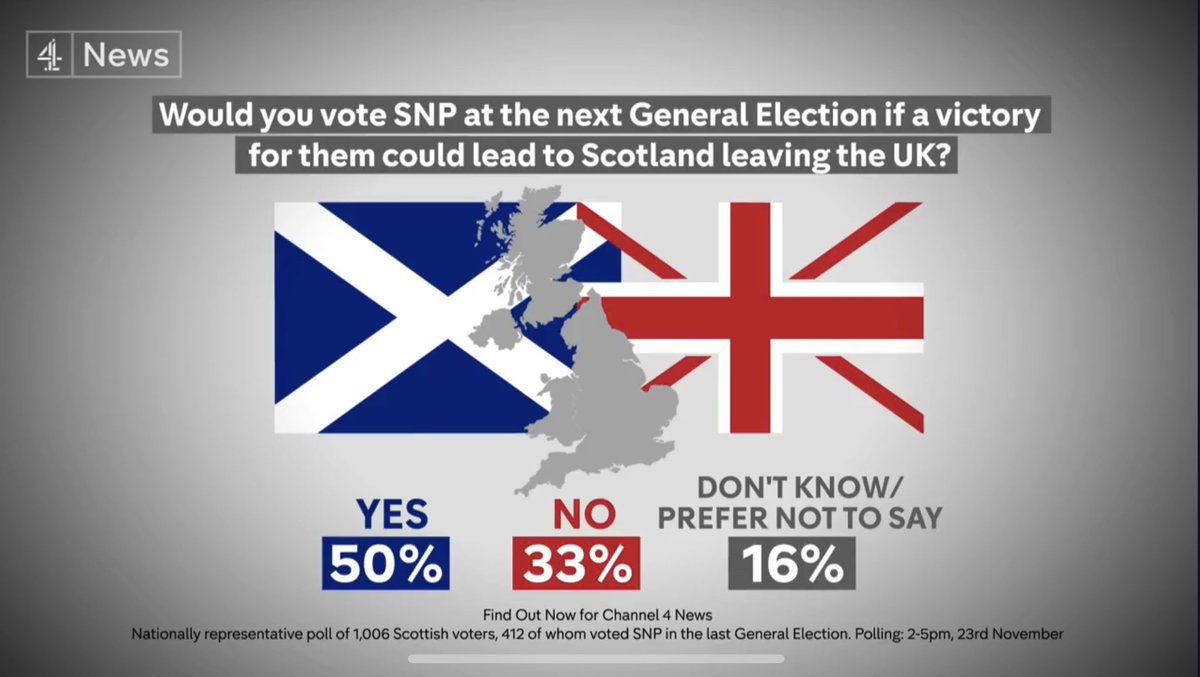 @jackiebmsp
The SNP cut £65m from the primary care budget while tone deaf @HumzaYousaf urges people to go to their GP rather than A&E. GPs are working hard but struggling to meet demand. Practices are closing & patients can't get treatment. This out-of-depth Health Secretary should resign. 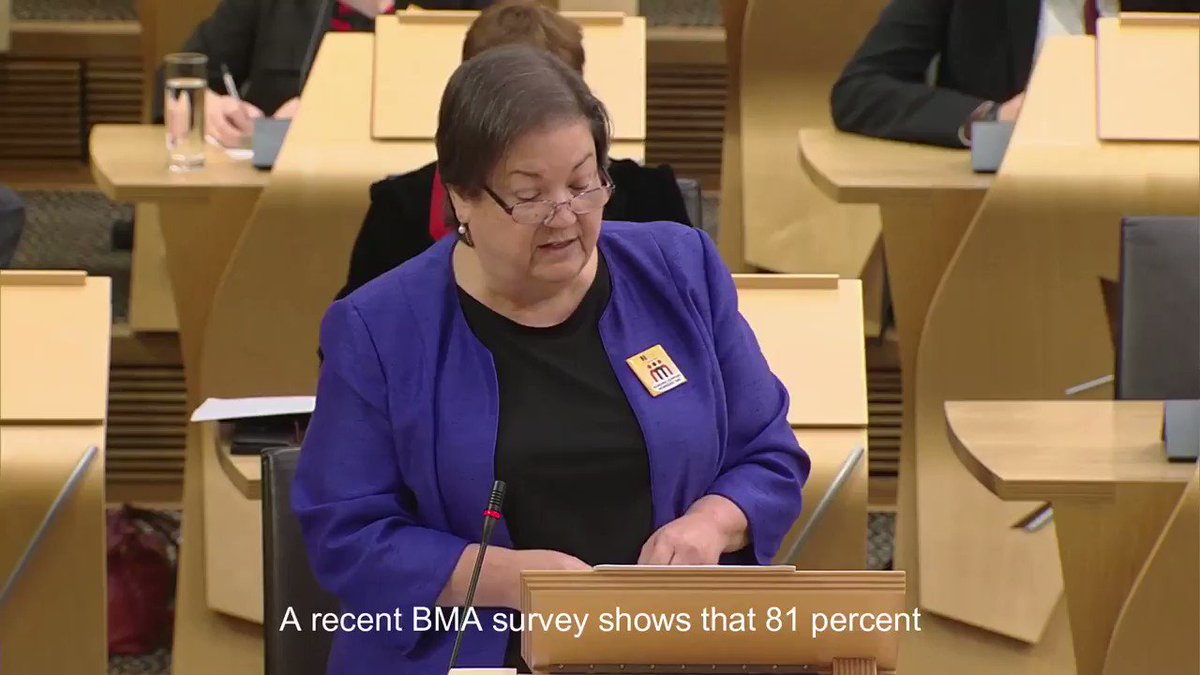 @conor_matchett
The Scottish Greens have confirmed that every vote for them at the next general election will "count towards a pro-independence majority", the party has said. In 2015, the SNP and Green vote combined was more than 50 per cent of the votes cast. It's been done before.
23 Nov, 03:52 PM UTC

MSM Monitor
@msm_monitor
Laura Maxwell can't stop herself referring to the Scottish Govt as "the SNP Govt". She was at it again this morning in a pretty sharp interview with Angus Robertson. At one point Maxwell bizarrely asked if using a general election to ask folk to vote for Indy was democratic.
24 Nov, 07:23 AM UTC

The People of Scotland🏴󠁧󠁢󠁳󠁣󠁴󠁿
@nationalismfor1
From this day until the SNP is gone. Every voter and politician has to constantly and without respite highlight every single SNP failure, act of corruption and lie as bluntly and laugh at the SNP voting morons
23 Nov, 09:14 PM UTC

Billy Kay
@billykayscot
Don Roberto, who founded Scottish Labour and then the SNP:“THE ENEMIES OF SCOTTISH NATIONALISM ARE NOT THE ENGLISH FOR THEY WERE EVER A GREAT AND GENEROUS FOLK, QUICK TO RESPOND WHEN JUSTICE CALLS. OUR REAL ENEMIES ARE AMONG US, BORN WITHOUT IMAGINATION.”
23 Nov, 03:48 PM UTC

Effie Deans
@Effiedeans
I don't think Scottish nationalists have quite grasped how devastating the Supreme Court ruling is. Turning down Pretendy indyref2 was expected. But undermining all of the SNP's assumptions was not. Scotland is not a colony it is part of the UK. It is not undemocratic to say No
24 Nov, 07:57 AM UTC

anon🥷🏴󠁧󠁢󠁳󠁣󠁴󠁿
@anonymousScot1
@GrahamGGrant 62 out of 73 constituency seats went to the SNP. I call that a landslide on its own especially considering the fact that the d’hont system stops the snp gaining many regional seats because of the number of constituency’s won https://t.co/vgPNJrB43q
23 Nov, 03:11 PM UTC

David Clater 🦖
@SpawnofJustice
@CameronMcNeish UK democracy remains in rude health. When it was in real danger was on 19 September 2014, when the SNP refused to respect the settled will of the Scottish people, as clearly voiced on a record 85% turnout with a share of the vote at which the SNP have never even sniffed.
23 Nov, 12:37 PM UTC

Jane Lax - MND - find a cure
@Janela_X
It is the SNP who are referring to this defacto referendum, not everyone else. You can't turn a general election into a referendum. Referenda have 2 options. A GE has several parties. This is utter nonsens by Robertson https://t.co/T7foXXJ0vr
24 Nov, 07:09 AM UTC

MSM Monitor
@msm_monitor
Should the SNP & Greens step down from government at Holyrood and force a Scottish election where both stand on the single issue of Scottish independence? RT for as wide a participation as possible please. 🏴󠁧󠁢󠁳󠁣󠁴󠁿
24 Nov, 07:12 AM UTC

Georgina 🏴󠁧󠁢󠁳󠁣󠁴󠁿🇬🇧💜🤍💚
@uk_georgina
@kellylgiven Why? The only anti democracy Party is the SNP with their refusal to accept the results of not one, but two referendums.
23 Nov, 03:44 PM UTC

Gordon
@RollOn2023
I might be proven wrong, but I feel it’ll be easier for the SNP win an election based on independence than it would be for them to win a referendum. Unionists crowing about their “victory” might yet be left wishing the court had decided the other way. 🤷🏻‍♂️
23 Nov, 09:16 PM UTC 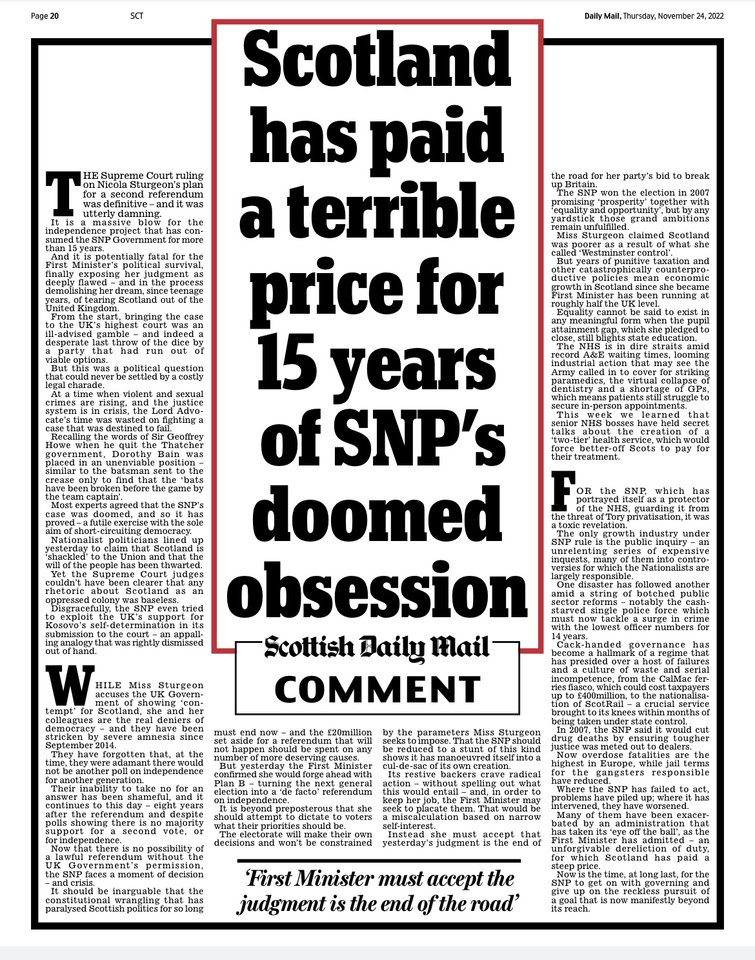 Malcolm Tucker
@gorbalsgoebbels
@kellylgiven I’m more concerned with: Indoctrination Censorship Propaganda Cover ups Wasting taxpayers money All down to the SNP and Sturgeon. I know you want on the gravy bus. Need to be quick. The party is over.
23 Nov, 07:31 PM UTC

Blues Brother
@wavydot
@kellylgiven I'm deeply concerned that Sturgeon, the SNP and the nationalists agitated to overturn this legal, democratic process pretty much as soon as the votes were counted and their decisive defeat confirmed. As Sturgeon likes to say, we'll 'take no lessons' on democracy from her or hers. https://t.co/PF3f9a1U6A
23 Nov, 05:49 PM UTC

Alastair McIntosh
@alastairmci
In case The @guardian wonders why it’s been some time since some of us up country last sent it a donation. This is captioned, “Guardian Opinion Cartoon: Steve Bell on the SNP’s response to losing Indyref2 court case.” https://t.co/ylQG8huA0V
24 Nov, 08:15 AM UTC

ThisIsSlovakia
@ThisIsSlovakia_
This is #UFO 🛸 A unique observation deck on the pylons of the SNP Bridge at a height of 95 metres with amazing views of the city and visibility of up to 100 km. It offers the most beautiful sunset combined with a culinary experience. #ThisIsSlovakia #bratilava 📷: Matej Kovac https://t.co/kGe2FqxkOZ
24 Nov, 08:23 AM UTC

@conor_matchett
ANALYSIS: Sturgeon's de facto referendum is a career-risking move "The de-facto referendum has turned into an unstoppable snowball hurtling down the hill towards the SNP, but no-one internally seems to have a clue as to what they can see coming." https://t.co/o4wG4Clvkx
24 Nov, 08:25 AM UTC