Thiel is trending on Twitter. Popular tweets on Thiel.

@mikepompeo
Great conversation with Peter Thiel at the @nixonfoundation seminar last night. America can — and must — confront the CCP technology threat. We will win. https://t.co/LYHOzWaaDj
07 Apr, 04:25 PM UTC

@nixonfoundation
“Even though I'm a pro-crypto, pro-Bitcoin maximalist person, I do wonder whether if at this point Bitcoin should also be thought of in part as a Chinese financial weapon against the U.S.” says @Paypal co-founder Peter Thiel. More on cryptocurrencies from The #NixonSeminar: 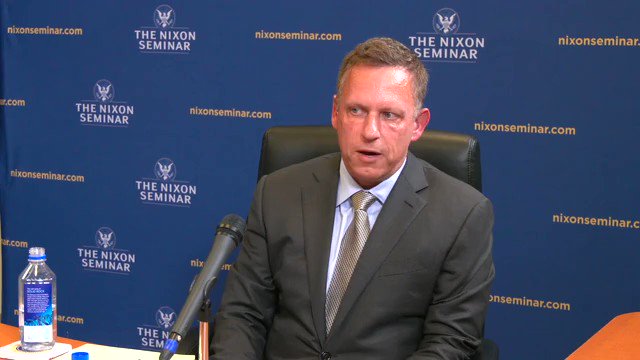 @RMac18
Charles Harder, the lawyer who secretly took money from Peter Thiel to sue Gawker Media out of existence, has some thoughts on cancel culture in a new op-ed. https://t.co/EEfb6O11Aw https://t.co/0ltz2zC2zJ
07 Apr, 03:08 PM UTC

Joe Weisenthal
@TheStalwart
Wow. Peter Thiel says Bitcoin is a Chinese weapon and that the US needs to crack down on it harder https://t.co/eVrWMfwDVV scoop from @chafkin
07 Apr, 08:33 PM UTC

zerohedge
@zerohedge
'Pro-Crypto' Peter Thiel Warns Bitcoin "Could Be A Chinese Financial Weapon Against The US" https://t.co/3FOJRf1jNO
07 Apr, 10:20 PM UTC

@EricRWeinstein
This is absurd. Peter Thiel does not hate Bitcoin. True, I’ve never found a shrine to BTC in his home. He has never written a song or prayer to Bitcoin. And I have never seen him lovingly polishing a physical Bitcoin. But for gosh sakes, enough with the insane misrepresentation. https://t.co/K8l513DQJV
07 Apr, 08:49 PM UTC

Zhu Su
@zhusu
Thiel is pointing out to the nation's elite that, far from being tulips or a speculative mania, Bitcoin has geopolitical and civilizational significance and will be pivotal in the rise and fall of fortunes and empires $BTC
07 Apr, 11:24 PM UTC

Whitney Webb
@_whitneywebb
@LibertyBlitz I would say this is my most recent. Palantir was explicitly founded to make a privatized version of the DARPA program Total Information Awareness after 9/11 by neocons, Thiel and the CIA. https://t.co/MROLRoWwM6
07 Apr, 08:58 PM UTC

@HeerJeet
So Thiel is saying he's pro-Bitcoin and Bitcoin is also a Chinese financial weapon to undermine American global hegemony, which means Thiel is pro-China & anti-American? Have I got that right? https://t.co/oTaXHCVYGZ
07 Apr, 10:03 PM UTC

@balajis
Put another way, obviously Thiel does not consider the **Euro** to actually be a Chinese plot against America. But China may favor the Euro as part of a more multipolar world. In theory they’d favor Bitcoin too (though not in practice!). A humorous remark turned into clickbait. 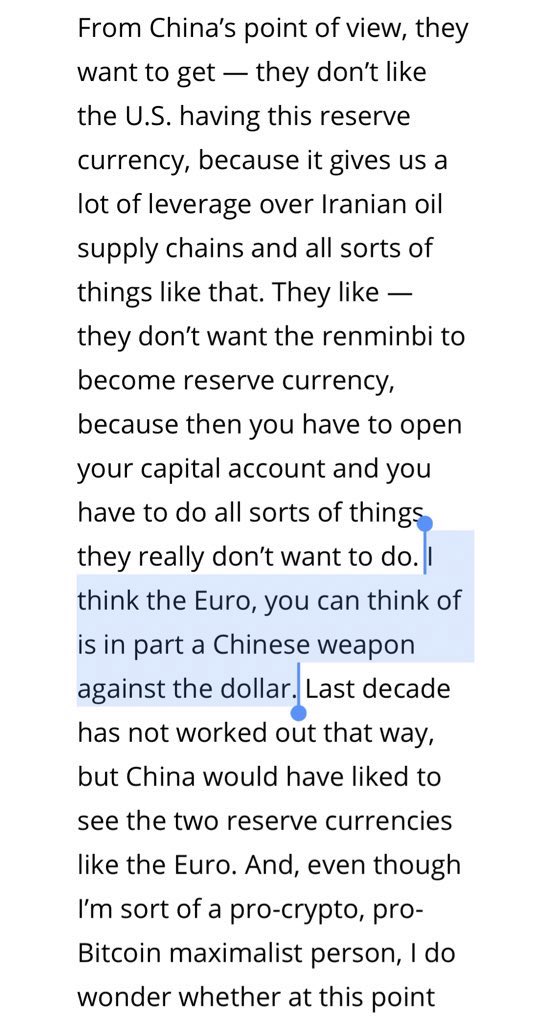 nietzbux
@nietzbux
Peter Thiel, co-founder of PayPal, the man who bought Zuckerberg a car before he got rich, an initial investor of Ripple (OpenCoin) in 2013, called himself a, "pro-Bitcoin maximalist person" then went on to call BTC a Chinese financial weapon. Something not adding up here...yet.
07 Apr, 11:14 PM UTC

Indo-Pacific News - Watching the CCP-China Threat
@IndoPac_Info
2) Thiel also said that Apple was unlikely to confront China because of its massive supply chain to manufacture iPhones and other products in the country.
07 Apr, 10:55 PM UTC

Breaking Market News
@FinancialJuice
ACCORDING TO PETER THIEL, CHINA COULD BE UTILIZING BITCOIN AS A "FINANCIAL WEAPON" AGAINST THE UNITED STATES.
07 Apr, 11:25 PM UTC

Cameron Harris
@cameronxharris
This👇🏼 @QwQiao nails it. Peter Thiel is one of the greatest minds of our generation. He knows what he’s doing. Few know that @VitalikButerin was awarded a grant by Thiel’s fellowship which is amazing and he obviously believes in the technology. https://t.co/3Nu6nwmLiw
07 Apr, 11:25 PM UTC

Shadetree Mechanic
@ClimaxPragmatic
@gal_suburban Matter of time before Thiel, Musk, and a few others in that club become the obsession of a nut job that takes Mimetic Theory to heart. They are the disease
07 Apr, 11:29 PM UTC

EnjoyingTheRide
@HulsZach
@digitalassetbuy @peterthiel and @elonmusk failed to accomplish what they wanted to with PayPal...here’s Elon’s mentality on failure. I’m going to take a wild guess here and say that Elon & his buddy Peter Thiel came up with a different plan to accomplish their goal. 😉 https://t.co/JwaBjxOzSk
07 Apr, 11:27 PM UTC

Rekt
@MattLoita
I agree with Thiel. Cold wars are bullish for superweapons. (Why is this controversial?)
07 Apr, 11:27 PM UTC

Bitcoin Meme Hub 🔞
@BitcoinMemeHub
Peter Thiel “Even thought I am maximalist i wonder if #bitcoin is a financial weapon of the Chinese government against the dollar” Certainly you would have thought by now that Thiel knows how Bitcoin works, but well I guess he does not https://t.co/euPkGgnGTD
07 Apr, 11:27 PM UTC