@JohnJCrace
Dominic Raab balmes the Tiverton defeat on people not voting Conservative. Where do they find such intellects?
24 Jun, 08:46 AM UTC

@mrjamesob
The Honiton & Tiverton result is stunning, Wakefield gratifying. Apart from the obviously delusional & besotted, it’s hard to see how anyone can continue to defend Lebedev’s lawbreaking lapdog by lying about vaccines or pretending that any other PM would have helped Ukraine less.
24 Jun, 06:51 AM UTC

@RhonddaBryant
Politics rarely delivers unequivocal moments. Yesterday was one such. Labour achieved a much bigger swing in Wakefield than even we thought possible and the Tories were still briefing they might win in Tiverton yesterday morning. Voters dealt Johnson a decisive blow.
24 Jun, 07:05 AM UTC

Parody Boris
@Parody_PM
The voters of Wakefield and Tiverton have sent a clear message and I am determined to listen. The message I’m hearing is “please cling to power for as long as possible and continue to wreck the country and your party”.
24 Jun, 10:24 AM UTC

@doctor_oxford
Simply incredible to hear Dominic Raab on R4 attempting to dismiss today’s results as the voters of Tiverton and Wakefield getting “distracted” 😳
24 Jun, 07:25 AM UTC

@THEJamesWhale
I thought it would be interesting to point out that Labour lost their deposit in Tiverton and Honerton and the liberal democrats lost theirs in Wakefield.
24 Jun, 12:31 PM UTC

@EdwardJDavey
The Liberal Democrats have made political history with this stunning victory in Tiverton and Honiton. I'm delighted that @RichardFoordLD will be joining us as our 14th MP. He’s going to be a brilliant local champion for the people of Devon.
24 Jun, 08:21 AM UTC

wilma ⚖️🥂
@furbabygirl
Perhaps the people of Tiverton and Honiton who voted LibDem would now like to receive the 1100 illegal migrants that are being foisted on Linton on Ouse in N Yorks (population 600) ?
24 Jun, 01:48 PM UTC

🏴󠁧󠁢󠁥󠁮󠁧󠁿English Rebel - Kingdom of England
@TheEnglishRebel
The people of Tiverton and Honiton should now prepare to accept a mass detention centre after they voted for a party that wishes to welcome refugees. The government must reflect voters views and give them what they want. Start with 5,000 people moving to these towns.
24 Jun, 12:41 PM UTC

John Lawson
@Johninpompano
The Tiverton by-election was the biggest swing towards an opposition party in modern history, last night when I tried to follow the results on the BBC from NYC there was nothing on the BBC website. Disgraceful bias. I used to be a proud BBC loyalist. Not now.
24 Jun, 12:55 PM UTC

@Telegraph
✍️ 'Her early morning disappearing act at a leisure centre in southern Devon will likely prove to be the most memorable moment of a Conservative campaign that failed to spark into life' https://t.co/9P7CW1YiUU 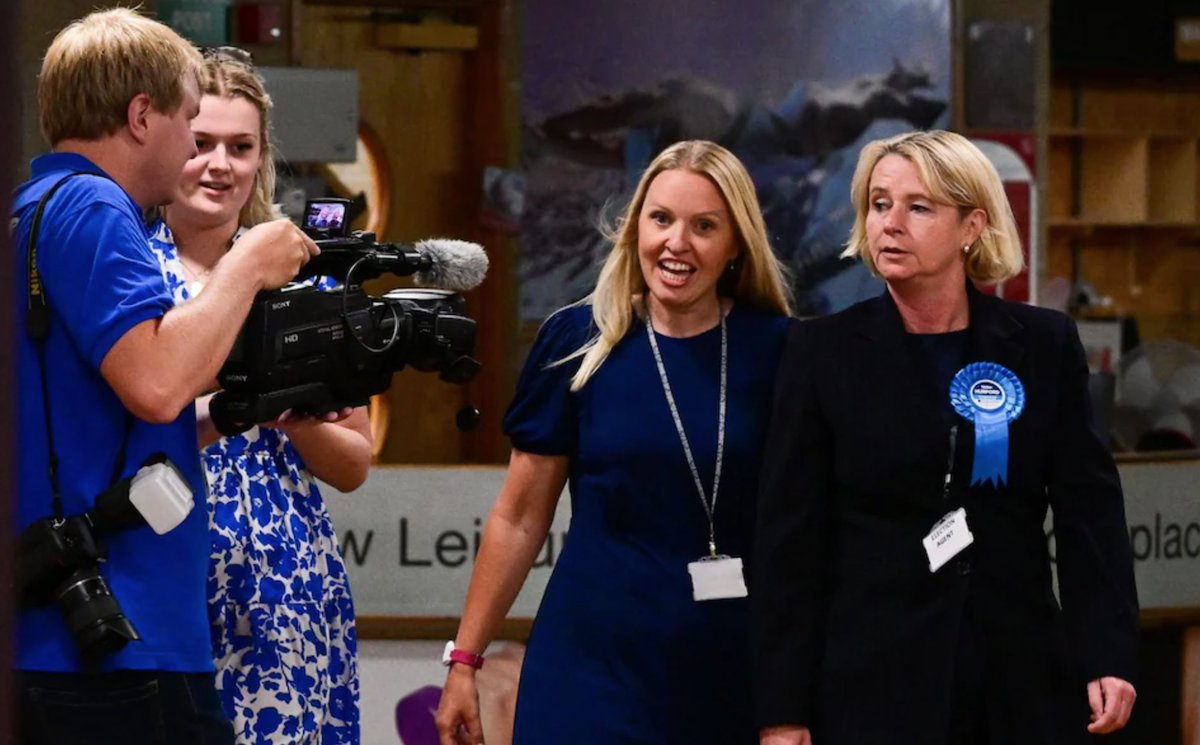 🇺🇦 Lord Sir Jon of R 🆗
@anataboga
@Haggis_UK But @SuellaBraverman there wasn't a "pact" was there?! A pact would be Labour not standing in Tiverton & Honiton and Lib Dems not in Wakefield. But both stood up candidates. What happened is the VOTERS exercised their democratic right to vote tactically to Get The Tories Out.
24 Jun, 06:57 PM UTC

Paul. B Runo Always European #FBPE #JohnsonOut
@RunoPb
@THEJamesWhale Labour lost its deposit in Tiverton and won Wakefield on a decent swing. Lib Dems lost their deposit in Wakefield and won on a huge swing in Tiverton. This is industrial scale tactical voting, and it's a big deal because this will destroy the Tory party. Thank god.
24 Jun, 05:39 PM UTC

@nadhimzahawi
The voters will judge this Conservative Government on what we deliver next. For me, it's a focus on skills, schools & families. New buildings for Tiverton High School was a big issue in the Tiverton result. We hear you; delivering on real issues like this should be our focus. 2/2
24 Jun, 01:50 PM UTC

Sanjay 💙 #RwandaNotInMyName
@SanjayFBPEUK
@THEJamesWhale 👆 I thought it would be interesting to point out that the Tories lost both their seats - in Tiverton and Honerton and Wakefield because their previous MPs were perverts and the current PM is not even trusted by more than 40% of his own MPs. There fixed it for you.🤷
24 Jun, 03:37 PM UTC

zenon #johnsonout
@zenon2009
The people of Tiverton and Honiton listened. They got behind the progressive alliance and as a result a near record 30% swing! #TivertonandHoniton #JohnsonOut151
24 Jun, 11:45 AM UTC

KizzyDaze 🏳️‍🌈 🇺🇦
@KizzyDaze
According to Boris Johnson, the Wakefield and Tiverton & Honiton bi-election results have been "a reflection of many things." Here is @PeterStefanovi2 explaining for poor BJ, how those "many things" all lead back to...Boris Johnson. https://t.co/K3Ku1UyNLw
24 Jun, 09:05 AM UTC

Harley #BackBoris #BackUkraine
@Harley_Tory
ITV News says the Conservatives are facing tough questions well we’re not the ones that only got 3.7% like the @UKLabour party are we @Keir_Starmer @AngelaRayner so get of your high horses & get real almost no one voted Labour in Honiton & Tiverton 🤣
24 Jun, 06:07 PM UTC

Anne Suffolk #FBPPR #fbpe #ClimateCrisis 🇪🇺🇬🇧
@AnneSuffolk
Tiverton & Wakefield shows tactical voting might work but that PR works better. Tactical voting shows who & what voters want to vote against, not necessarily who and what they want to vote for.Time to get PR done #FBPPR #followbackfriday
24 Jun, 07:35 AM UTC

🏴󠁧󠁢󠁥󠁮󠁧󠁿English Rebel - Kingdom of England
@TheEnglishRebel
The new immigration centre should be named in honour of the new MP Richard Foord. It’ll serve as a reminder to people in Tiverton that they voted for this. Guaranteed he won’t object to the new centre. He wants them here.
24 Jun, 04:31 PM UTC

Neal Lawson
@Neal_Compass
These two big mid term by-election wins must be replicated across the whole country come a general election. That’s why we need a #ProgressiveAlliance ⁦@CompassOffice⁩ https://t.co/rMcUqd1zSo
24 Jun, 07:01 AM UTC

Dawn
@DawnDawniew62
@paulabearthe2nd @sandieshoes Blood boiling isn’t it 🤷‍♀️ Out & About asking elderly in Tiverton about voting and they all kept harping on about Partygate. The Media really did a job on the oldies/BBC watchers I believe.
24 Jun, 12:40 PM UTC