v e r i t y
@veritynevitt
It's actually really sad that ordinary people feel the need to illustrate the value of workers to combat the disrespectful Tory talking points and media smears. It's sad that rail companies do not see employees as the assets they are to the railways & society.
24 Jun, 10:33 AM UTC

Richard Murphy
@RichardJMurphy
Where the Republicans go the Tories follow. We take the right to abortion, contraception, gay rights and same-sex marriage for granted now. We shouldn't. Very soon Tory think tanks will have their sights on all of them. Fascism is on the march.
24 Jun, 02:51 PM UTC

@PippaCrerar
👀Boris Johnson planned to build a £150,000 treehouse for son Wilf at Chequers - paid for by a Tory donor - but was forced to abandon the idea after the police raised security concerns. Mind-boggling story from ⁦@Steven_Swinford⁩ https://t.co/5uvI6Ug8lZ
24 Jun, 11:57 PM UTC

the Good Intentions
@GoodIntention3
The new Tory Party chairman, Ben Elliott, was allegedly running a business operating in Russia after the invasion of Ukraine. Is it too much to hope that someone in the media will ask him about this at his first press conference?
24 Jun, 10:26 AM UTC 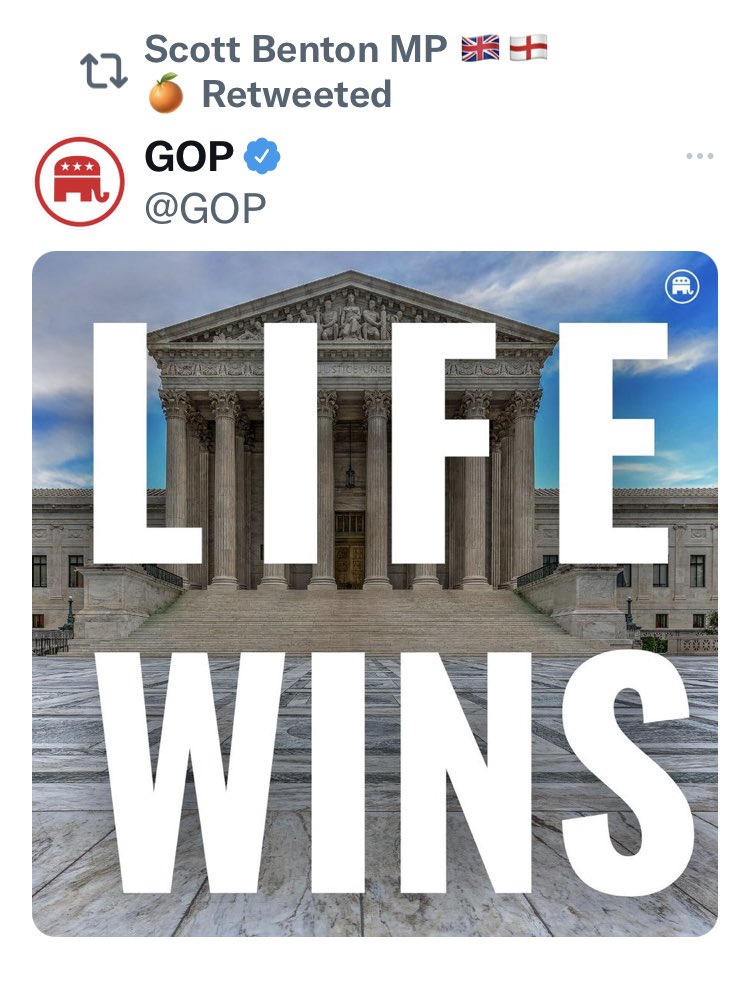 Kieron Clarke
@kieronishere
💥On Boris Johnson’s future as leader following today’s by-election results, one senior Tory MP described him to me as “an ocean going, gaff-rigged c*nt” … 😬 They added, “we can’t wait to kick his arse out of Downing Street before he brings the whole Conservative Party down”.
24 Jun, 06:03 PM UTC

Daniela Nadj
@DanielaNadj
We could have 20 Michael Portillo moments at the next general election. The entire Tory Cabinet could be wiped out. Let that beautiful vision start sinking in.
24 Jun, 07:51 PM UTC

@BBCPolitics
"The Tory Party is absolutely imploding, they know they are out of ideas and out of touch" Labour leader Keir Starmer says if the Conservative Party "had any decency they they would get out of the way for the next Labour government" https://t.co/eaW3NnKlyG 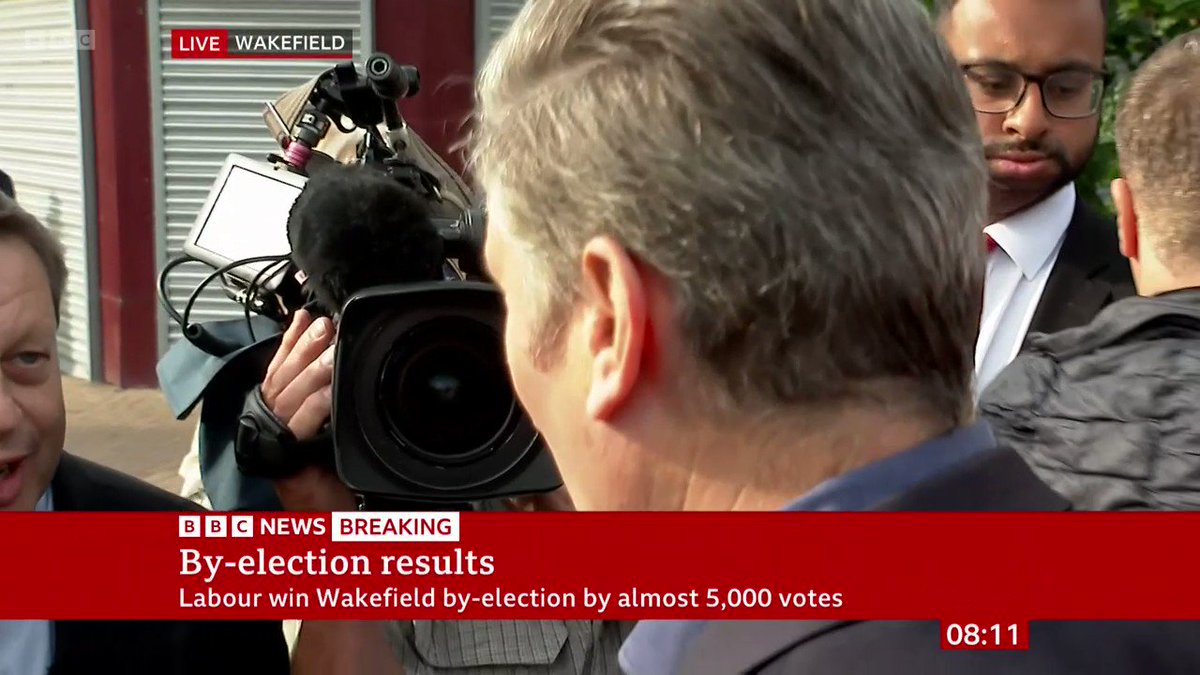 Jane blades
@Janeblades2
Left wing all my life but who seriously listens unless you have thousands of followers? I'm about to be evicted and I have severe disabilities.emailing my Tory MP mark Spencer daily with evidence of discrimination for 8 months and he's refused to help me this is their job?
24 Jun, 06:30 PM UTC

Marina Purkiss
@MarinaPurkiss
The same Tory peer, Lord Brownlow who paid for Johnson’s No.10 flat refurb… Was also ready to pay for a £150k treehouse for Johnson’s son, Wilfred How generous …and nothing at all to do with the string of Govt contracts he won worth up to £120m https://t.co/8IIYK1YkxN
25 Jun, 05:55 AM UTC

Inopportunesses Esquire ☘
@Bandraidoir
Didn't the Tory party bribe the DUP with a couple of billion pounds in a dishonest political pact to get the great oven ready deal Brexit through @SuellaBraverman ???
24 Jun, 08:25 PM UTC

Jamie McLaughlin
@jjsmclaughlin
Just wanna point out that this isn't as crazy as it seems. Question Time has been stuffed with plants for many years. Some of them actual Tory councillors etc being passed off as members of the public. https://t.co/UFeD9GRs5d
24 Jun, 11:10 AM UTC

Keith Burge
@carryonkeith
The thing is, all you Tory MPs, if you really were 'listening and learning' you'd have got rid of him.
24 Jun, 11:15 AM UTC

Laceybod💙🇪🇺🇺🇦🌻
@Laceybod
@KevinTurveyRIP @Haggis_UK @SuellaBraverman @Conservatives Suck it up Ms Braverman. The Tory party lost and big style. We'll vote how we please and it certainly isn't for you to dictate who or how we vote.
24 Jun, 04:13 PM UTC

King Arthur
@Antipolluters
WHY DOWDEN had to go! 1. Wakefield Dowden ran the Tory campaigns. In Wakefield he imposed a remain candidate rather than the local party choice - who stood as IND and came 3rd after official Tory with 7.6%, and MP's refused to campaign. https://t.co/sSy7hcB3ea
24 Jun, 12:21 PM UTC

Sir Ultra Alex Young 🇪🇺
@AxleYoung
What a day! Two Tory losses (one historically massive) and a resignation before I was even out of bed. If you are as happy as I am then lets give #followbackfriday a go and keep the good mood going #FBPE
24 Jun, 09:45 AM UTC

@Steven_Swinford
Exclusive: Boris Johnson planned to build a £150,000 treehouse at Chequers but was forced to abandon idea after police raised security concerns Discussions were held about Tory donor Lord Brownlow funding the project in Autumn 2020 https://t.co/54VwlkoY43
25 Jun, 05:12 AM UTC

Matthew Payne
@Matthew82069336
Covid infections at dangerous levels. Two new variants of omicron responsible. Sadly level of ignorance remains the same. Both within obscene Tory regime,and sadly a large swathe of public at large. Inevitably there are going to be many more needless deaths. Not flu @sajidjavid!
24 Jun, 10:06 PM UTC

Don't watch Westerns #FBPE #FBNHS #FBPPR#GTTO
@DonFbpe
I live in a Tory constituency where most people are keeping their opinions close to their chests but those prepared to say anything are angry at the Tories, angry at Johnson. They tell me they're voting Lib Dem at the next opportunity.
24 Jun, 01:21 PM UTC

@rosscolquhoun
Except in Scotland, where voters overwhelmingly back the EU. Yet Scottish Labour are going along with the strategy of backing Brexit so that Labour can win over Tory voters in the north of England. https://t.co/yiYrsFdGO7
25 Jun, 06:38 AM UTC

Sue Wilson / Сью Вілсон
@Suewilson91
"It's like a disease. The PM is infecting the Cabinet, & if the Tory party doesn't act in the next 6 months we will all be infected by him". Bit late for that. They're already contaminated. https://t.co/8rmbk2GYnv
25 Jun, 06:24 AM UTC

Roger Gall
@Shambles151
@Haggis_UK The Tories of course are only in power because the anti-Tory vote is usually divided over many other Parties and under FPTP this enables them to claim Govt. This is the worrying thing.
24 Jun, 04:48 PM UTC

richard oneill
@silverrich39
"A word!" with you snooty Tory voting types who have a nice cushy well paid job. When they've finished with the lower echelons, they'll be coming for you, and remember there's no class system in food banks!
25 Jun, 06:39 AM UTC