@POTUS
Record job creation. Record unemployment declines. Record increase in people in the labor force. The Biden economic plan is working — and it is getting America back to work.
07 Jan, 05:16 PM UTC

@WhiteHouse
Economic Update: -Unemployment rate fell to 3.9%, a rate we weren't projected to hit until 2026 before passing the American Rescue Plan -6.4 million jobs created, the most in any year since 1939 -The economy has regained 84% of jobs lost in the pandemic
07 Jan, 02:48 PM UTC

@RadioFreeTom
Unemployment, with everything that's happened around us, is 3.9 percent. Americans will find a way to think this is a disaster.
07 Jan, 04:02 PM UTC

@atrupar
Fox News is framing a jobs report with ~200k new jobs and an unemployment rate of 3.9 percent as a disaster for Biden. But let's review what they said about similar jobs reports during the Trump years. 🧵 https://t.co/pJHd715S2W
07 Jan, 05:19 PM UTC

@cvpayne
Breaking News: (ANOTHER) HUGE MISS ON JOBS NUMBER December payroll only 199,000 missing consensus by more than 50%. There will be cherry-picking and lipstick applied -Pres Biden so point to Hispanic unemployment rate but not mention 96,000 left labor force. Something is wrong
07 Jan, 01:43 PM UTC

@harrisonjaime
Folks, let’s get one thing straight: the news that today’s unemployment rate has hit 3.9% is HISTORIC. It’s the fastest single-year decline in unemployment in our country's history. That’s the Biden Boom.
07 Jan, 05:45 PM UTC

Angry Staffer
@Angry_Staffer
While you’re reading all the breathless articles about how the US economy “only” added 199,000 jobs, it’s worth remembering: - just had largest yearly job increase ever - unemployment hit pandemic low of 3.9% - most job reports have been adjusted WAY up
07 Jan, 01:55 PM UTC

@JesseLee46
How CNN covered Trump going below 4% unemployment vs how they are covering Biden going below 4%. Trump inherited 5% and took two years to get there. Biden inherited 6.2% and got there in a year. The jobs report today was better than the jobs report under Trump. https://t.co/6H15caXYOP
07 Jan, 03:25 PM UTC

@EricBoehlert
12 months ago the unemployment rate was 6.7% today, 3.9% we've never seen anything like this in US history. if Biden were Republican, press would put him on Mt Rushmore
07 Jan, 06:16 PM UTC

@WhiteHouse
Without the American Rescue Plan, experts predicted we would not reach a 3.9% unemployment rate until 2026. Today, we hit that number 4 years earlier than expected. 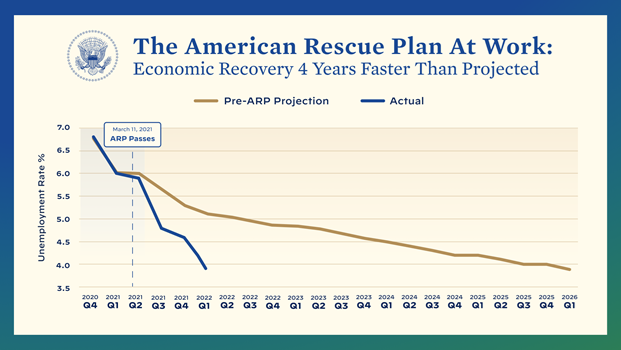 @JesseLee46
6.4 million jobs created in one year: a new record Unemployment rate drop from 6.2% to 3.9%: a new record This was the greatest jobs growth year in modern American history, and it’s not even close.
07 Jan, 02:32 PM UTC

@SpeakerPelosi
Today’s jobs report shows that the Biden #BuildBackBetter economy is working. Under Democrats’ leadership, America is getting back to work – with the largest calendar year drop in unemployment in history to 3.9 percent and a record 6.4 million jobs created.
07 Jan, 05:37 PM UTC

@WHCOS
Take a minute to consider how significant this is. Before the Rescue Plan, we were on track to have unemployment above 4% all the way until 2026. Now, it's here -- already. https://t.co/dyfPIralEG
07 Jan, 05:11 PM UTC

@harrisonjaime
.@GOPChairwoman and I actually agree for once -- 3.9% unemployment is GREAT news for our economy and workforce! https://t.co/T1cOrJtuvK
07 Jan, 04:33 PM UTC

Tristan Snell
@TristanSnell
Unemployment is at 3.9% - historically low. For the @nytimes to say “the economy stumbled” is misinformation and a gross breach of journalistic standards. It must be retracted and corrected immediately. https://t.co/OK1CAmbB8T
07 Jan, 05:26 PM UTC

What Biden Has Done
@What46HasDone
I am begging people to stop embarrassing themselves like this. The unemployment rate is based off of a survey the government conducts. It has nothing to do with whether or not people are receiving unemployment benefits. https://t.co/vIwbDIBPYW
07 Jan, 03:16 PM UTC

@JoaquinCastrotx
Amid the pandemic, American jobs are on the rise. 6.4 million jobs added — averaging 537,000 created per month in 2021. 3.9% unemployment rate — a historic low that wasn’t expected until 2026. This is what #BuildBackBetter looks like: opportunities for all Americans.
07 Jan, 07:34 PM UTC

William E. Spriggs
@WSpriggs
Today, unlike for the broader labor market, the Black unemployment rate went up from 6.5 to 7.1% it fell for high school dropouts from 5.5 to 5.2% and for high school grads to 4.6% The weakness in hiring Black workers means employers are NOT desperate @AFLCIO 1/2
07 Jan, 07:22 PM UTC

@Porter_Anderson
Media: @JohnJHarwood to @brikeilarcnn: The @JoeBiden admin "keeps waiting for a month with a big blowout jobs number, but understanding that given the misses, month after month, we're likely to get revisions up later. The unemployment rate is good, labor participation steady." 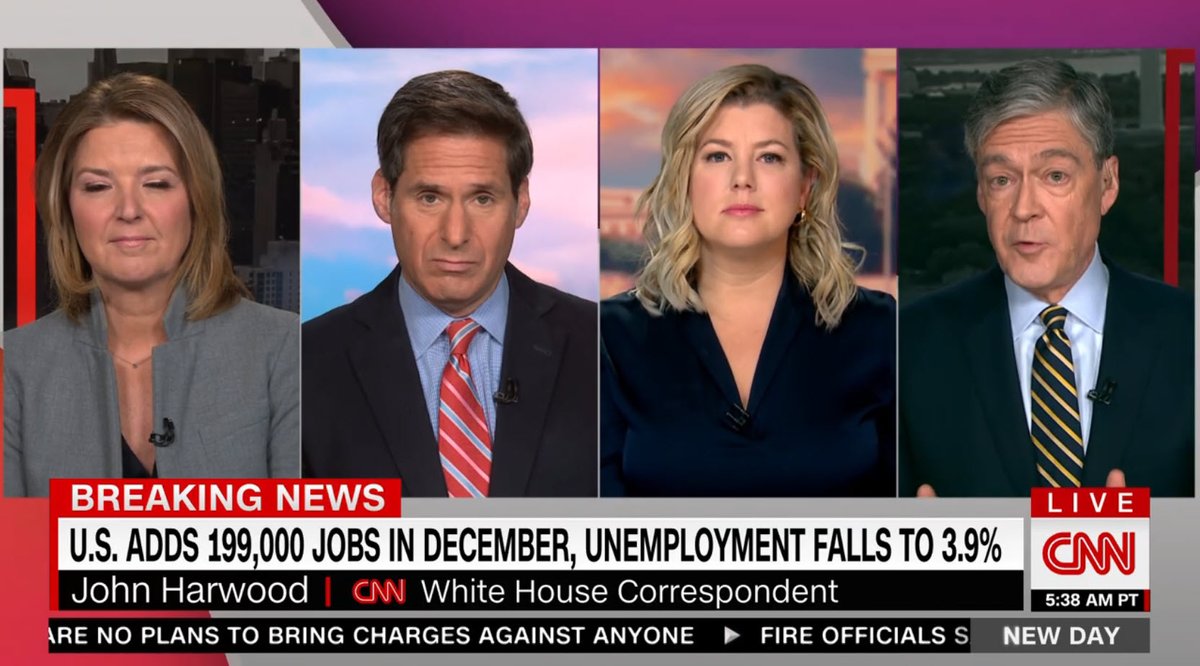