"US Supreme Court" is trending

Popular tweets on "US Supreme Court".

@business
Patagonia will provide bail for employees who are arrested while protesting after the US Supreme Court eliminated the constitutional right to abortion https://t.co/Z6d0a3Guzm
24 Jun, 07:23 PM UTC

@BNNBreaking
BREAKING: After the US Supreme Court struck down the constitutional right to abortion, @patagonia will provide bail for employees arrested while protesting.
24 Jun, 08:14 PM UTC

@nazirafzal
If US Supreme Court overturning #RoeVWade was about babies, there would be: Universal healthcare Free birth control Free education Free daycare Child support Criminalisation of all rape & child marriage As with all abuse of women, this is purely about male power and control
24 Jun, 08:21 PM UTC

@jeremycorbyn
The US Supreme Court decision to overturn Roe v Wade is devastating for the millions who have fought and won reproductive rights in every state. We stand in solidarity with all fighting for abortion rights and access to healthcare around the world. https://t.co/UKThBFv2Jc
24 Jun, 03:25 PM UTC

@palkisu
The US Supreme Court has struck down abortion rights for women. #RoeVsWade overturned. At least half of American states are expected to ban abortion. This is a dark day in US history. So much for being the self-appointed global class monitor on human rights!
24 Jun, 02:30 PM UTC

bowie 🦇 loves anna
@jamespttrally
us supreme court is seeming to forget that not everyone in the US follows christianity. in jewish faith it is required to get an abortion if it threatens the life of the mother. in muslim faith the life of the mother comes first. why is it that these voices are silenced? oh yeah.
24 Jun, 03:36 PM UTC

@MrAndyNgo
Twitter user Autumn J. McKibben, of Ohio, uses a racial slur against US Supreme Court Judge Clarence Thomas, who is black, because of the overturning of Roe v Wade. https://t.co/VXfSRZteQo 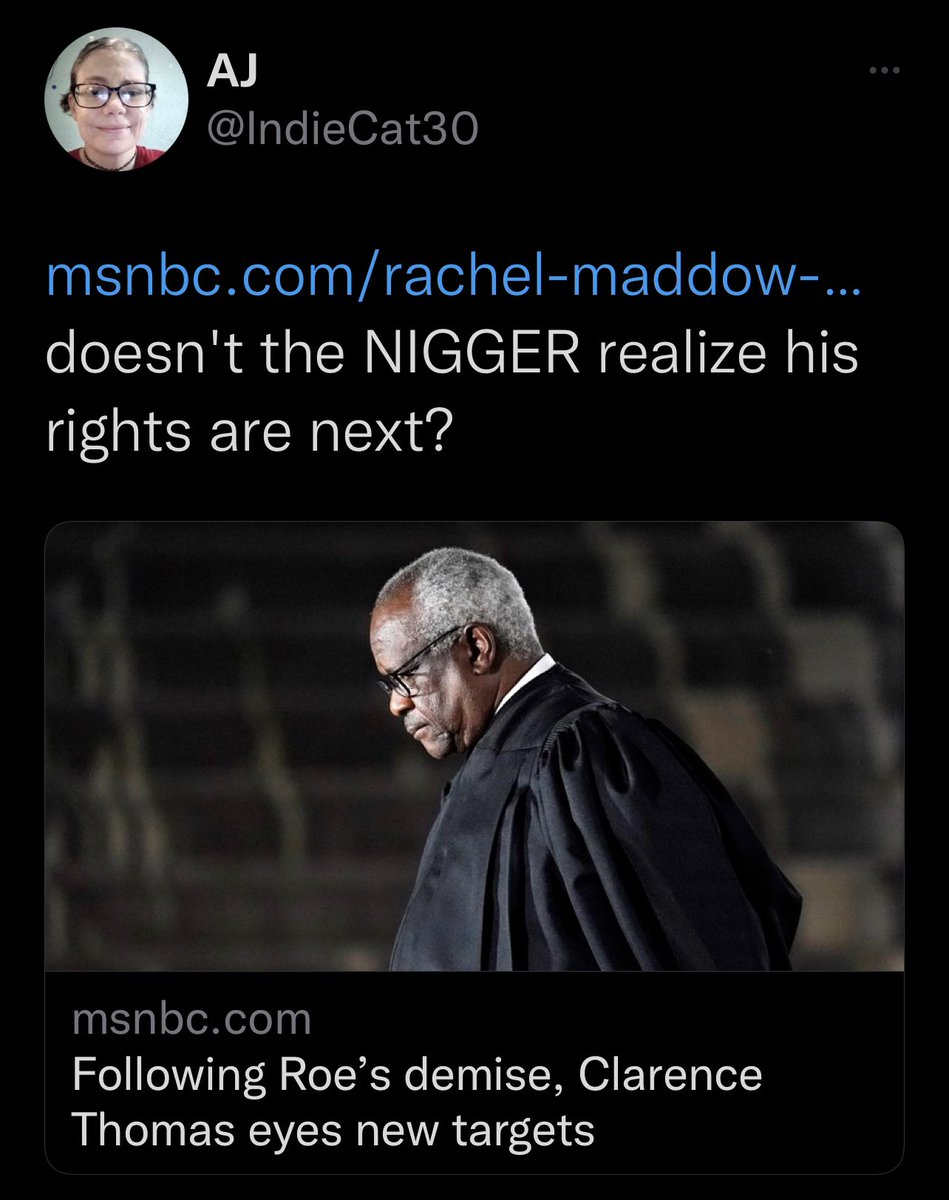 Leah M. Willingham
@LeahMWillingham
Staff at an Alabama clinic had to turn away patients in the waiting room. Some had traveled from Texas. “A lot of them just started breaking down crying. Can you imagine if you had driven 12 hours to receive care in this state and you are not able to?” https://t.co/epOXHfkJjK
24 Jun, 10:32 PM UTC

@MrAndyNgo
Journalist Jonathan M. Katz appears to call for deadly violence by invoking Haiti after #RoeVWade was overturned by the US Supreme Court. Abortion is illegal in all of Haiti. https://t.co/q5fR7zTffv 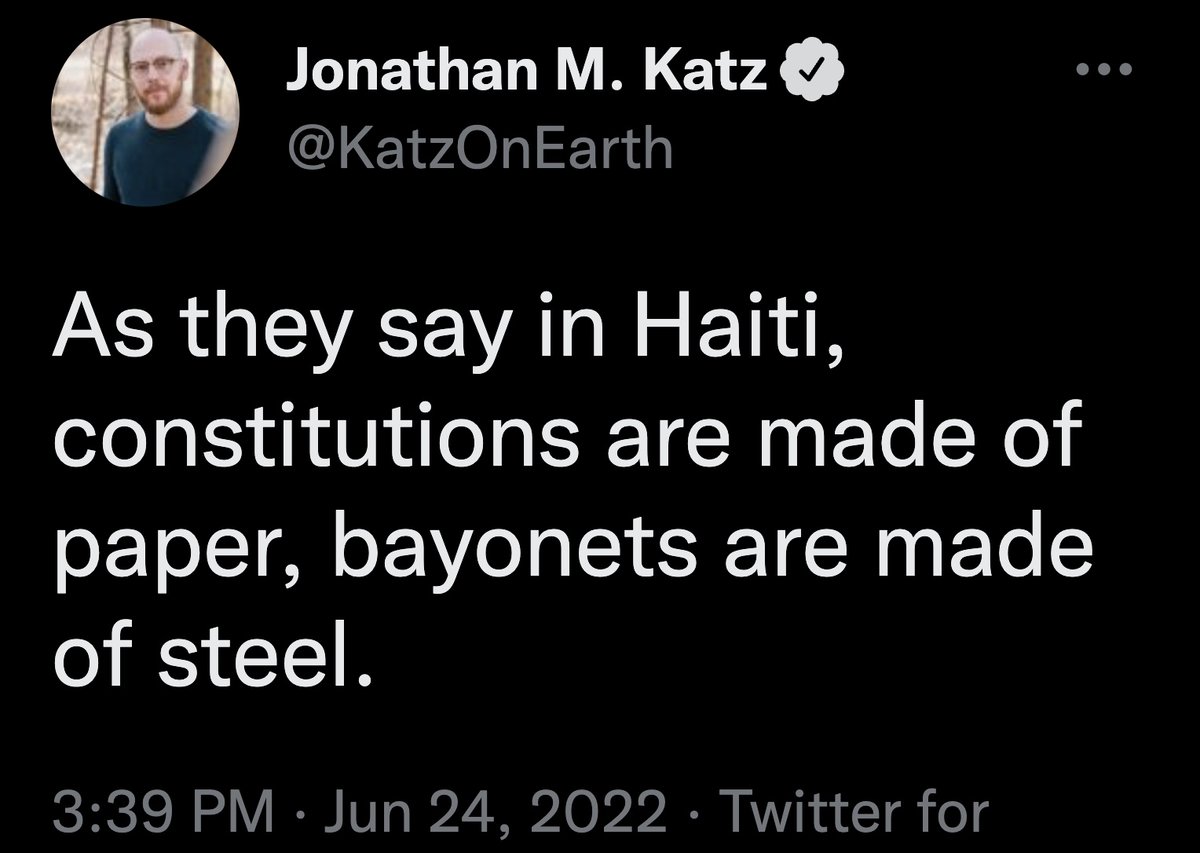 @dinosofos
“All these irrelevant old motherfuckers trying to tell us what to do with our fucking bodies”. @phoebe_bridgers calls out the US Supreme Court on stage at Glastonbury. She had an abortion last year. What a moment. 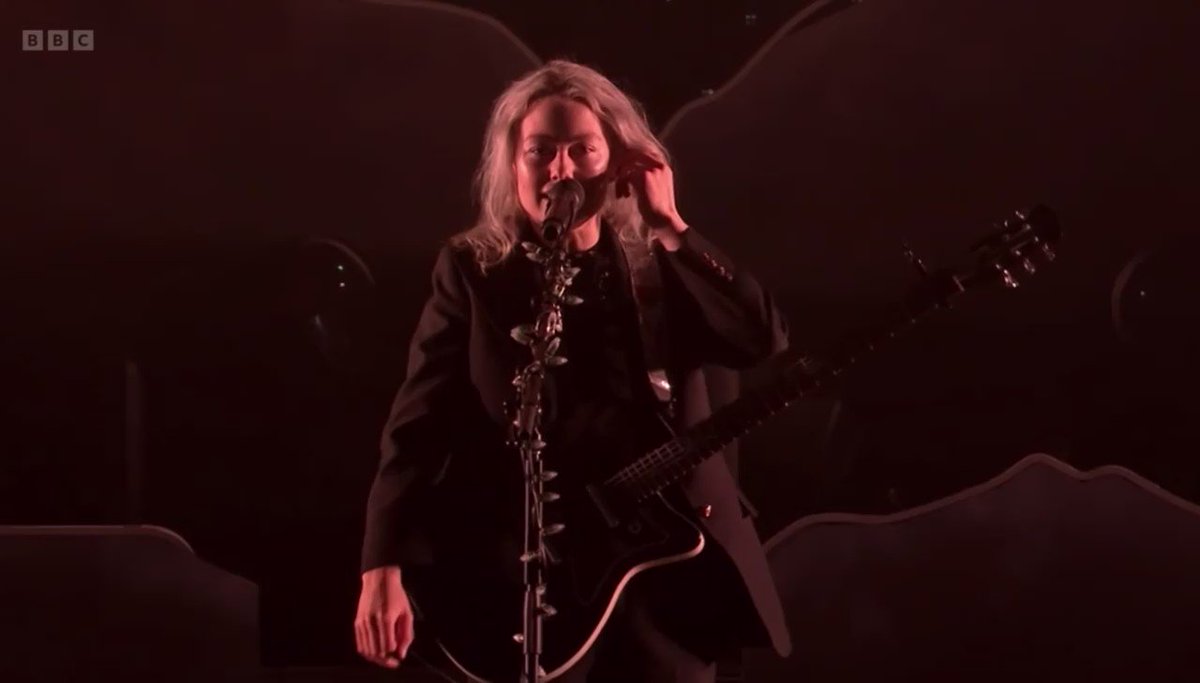 @mtracey
It's pretty weird that the leaders of France, UK, Canada, Spain, Belgium, Denmark, Norway, and New Zealand all felt they had to immediately weigh in on a US Supreme Court decision that has zero effect on them
25 Jun, 04:27 AM UTC

Unbranded
@Unbranded63
Pierre Poilievre has made no statement on the US Supreme Court decision on abortion. The Prime Minister has, Charest has, Patrick Brown has. Jagmeet Singh has. Some politicians don't want you to know where they stand on important issues. They skate over the ambiguity. By design.
24 Jun, 11:46 PM UTC

@antoniocostapm
It is impossible not to be disappointed with the decision of the US Supreme Court, paving the way for the banning of abortion. I have always argued we cannot criminalize issues of political, religious or ethical conscience. These are women's rights, that all states must respect.
24 Jun, 11:10 PM UTC

@Femi_Sorry
Dear America, Please remember that if all votes had counted equally in 2016, Trump would never have become President and he wouldn't have been able to fill the US Supreme Court with extras from The Handmaid's Tale. The electoral college is going to get women killed. #RoeVsWade
25 Jun, 08:15 AM UTC

The Sage
@SarkySage
One of the dumbest ideas ever is to have lifetime appointments to the US Supreme Court.
25 Jun, 05:02 AM UTC

Stuzi 🐝🐝🐝
@Stuzipants
1: Northern Joe Pasquale impersonator and comedy extremist @ScottBentonMP took to Twitter last night to celebrate the US Supreme Court ruling that overturns Roe v. Wade effectively stripping women of their abortion right to choose what they do with their body. Minutes later the..
25 Jun, 07:31 AM UTC

꧁Bobbi꧂
@SaltyBitch_52
US Supreme Court strikes down Roe vs. Wade. Praise God! Halleluiah!!! 🙏🙏🙏 Get ready for the liberal meltdown and rioting as the food source for baal is diminishing. https://t.co/9cXB7iEKgL
24 Jun, 05:39 PM UTC

Ben Canham
@wweisawesome123
Todays news from the US Supreme Court is heartbreaking. For the women of America, I’m so sorry. As a man, I really have no say in the matter, but please know, I stand as your ally and will continue to support women in the US and everywhere’s right to choose what is best for them. https://t.co/tEI5IIpKMO
24 Jun, 05:32 PM UTC

Gavin Esler
@gavinesler
Tweet from a Conservative peer, gloating about the Trump-packed US Supreme Court overturning abortion as ‘democracy’. 62% of American voters endorse a woman’s right to choose. I’m sure there are Conservatives in the UK who think Gilead is worth serious consideration too https://t.co/yfabvF0bS0
24 Jun, 04:16 PM UTC

@guardian
It’s time to say it: the US supreme court has become an illegitimate institution | Jill Filipovic https://t.co/FG1BSTIeNM
25 Jun, 07:09 AM UTC

@PennyRed
The US Supreme Court has just taken away the right to abortion. The state now has the right to force women, girls, trans men and non-binary people to carry unwanted pregnancies to term and give birth against their will. So much for the Land of the Free. #RoeVsWade
24 Jun, 02:44 PM UTC

@ahmednasirlaw
Overturning #RoeVsWade has tremendously increased my esteem and reverence for the US Supreme Court. It remains a much admired and adored institution. Forget about the cacophony of Liberal lullabies & war cries, we all knew Roe v Wade was built on soggy constitutional foundation.
25 Jun, 06:56 AM UTC

Eddy Jokovich
@EddyJokovich
Wow. When did the Taliban invade the US Supreme Court? #RoeVsWade
25 Jun, 07:53 AM UTC

@BethRigby
Wanted to re-post this after the US Supreme Court’s earth-shattering decision to overturn Roe v Wade. @GloriaAllred powerful on how this only serves it endanger women. Abortion won’t stop, it will carry on underground risking women’s lives Full interview https://t.co/rDv1cfpHcg https://t.co/4Ed5mILJNV
24 Jun, 06:39 PM UTC

@Reuters
'I fear for patients who are losing what was a protected constitutional right,' said Dr. Adam Jacobs as the U.S. Supreme Court overturned the landmark 1973 Roe v. Wade ruling that recognized a woman's constitutional right to abortion https://t.co/aFSGn5itzf 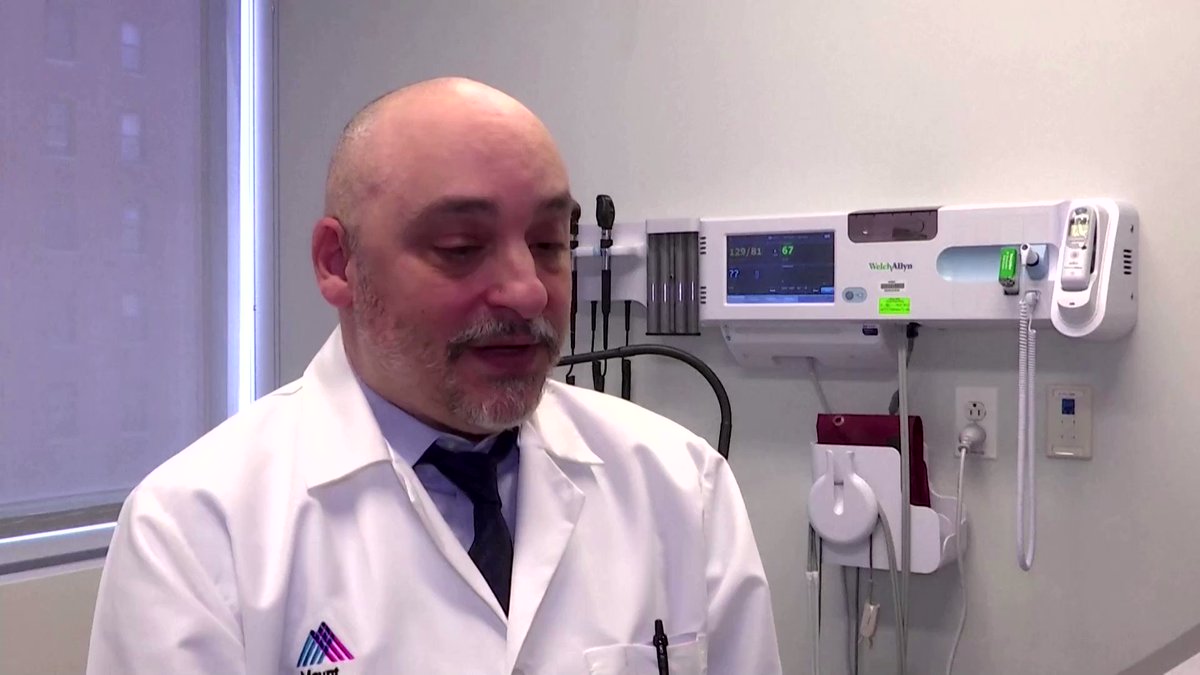